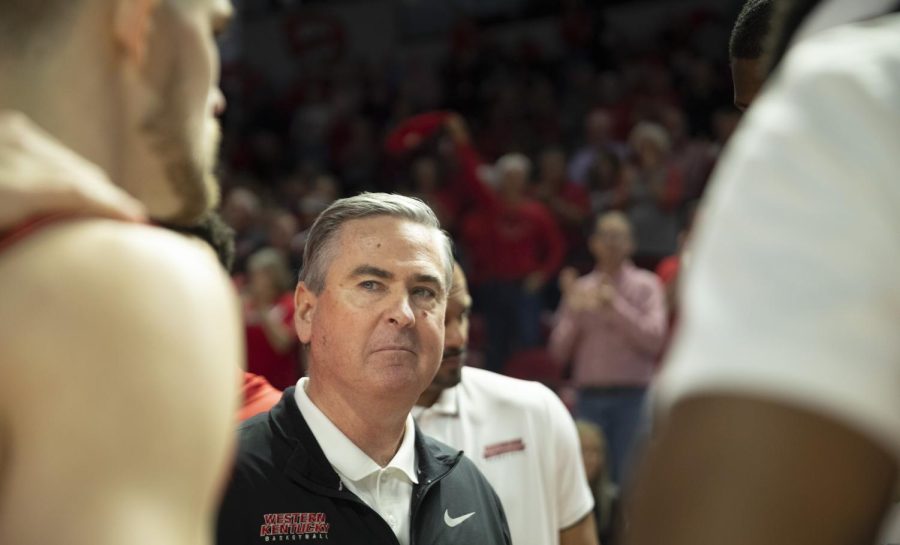 Coach Rick Stansbury in the huddle ahead of the WKU matchup with Marshall on Saturday, March 5. WKU won 69-78.

WKU Men’s Basketball (19-12, 11-7 C-USA) has completed the regular season and is heading to the Conference USA Tournament as the number two seed in the East.

The Hilltoppers claimed the second spot after defeating Marshall in the last game of the regular season, which gave them the last spot for a double-bye in the tournament.

“It’s all about three games. It’s no longer an 18 game season, it’s a three game season,” head coach Rick Stansbury said. “We’ll start getting prepared Monday the best we can for that first game.”

WKU could have one of the hardest paths to win the championship, with the most likely road being against Louisiana Tech, North Texas and UAB. Three teams that have a player on the All-Conference First team, But Stansbury says he likes where they finished in the bracket.

“Some people say the third seed has a little easier route to the championship game, nah, not for us,” Stansbury said. “We’re going to play every game and get a bye, that’s not easy to do.”

The play-in game between Marshall (11-20, 4-14 C-USA) and FIU (15-16, 5-13 C-USA) takes place on Tuesday evening. The Thundering Herd lost both of their regular season games against the Panthers but they were both competitive, losing the first game by four and the second game by one point.

FIU has lost five of its last six games, partly because its starting point guard Tevin Brewer has been off the court due to an undisclosed injury after only playing eight minutes against Old Dominion on Feb. 26.

The winner of that game will play the third seed in the West, La Tech. The Bulldogs (21-9,12-6 C-USA) lost two of their three contests against the two teams ahead of them in the standings, North Texas and UAB.

La Tech is led by All-Conference First Team big man Kenneth Lofton Jr. who averaged 16.4 points and 10.5 rebounds per game this year. WKU and the Bulldogs only played once this season, all the way back at the beginning of the year, in the first matchup of 2022.

WKU had a 17 point lead in the second half before the Bulldogs pulled off the comeback and won the game 74-73. La Tech led for a total of 26 seconds the entire game, outscoring WKU 53-42 in the second half. LA Tech had 20 points off turnovers to WKU’s seven. WKU was out-rebounded, outscored in the paint, and outscored in fast break points.

WKU went 3-1 combined against Marshall and FIU, sweeping the Herd in the last two games of the season and splitting home games with the Panthers, losing to them for the first time since 2016.

In the lone loss to FIU, WKU was down by 18 and almost pulled off the comeback but it was too much to overcome. FIU hit 16 threes to WKU’s eight. The Hilltoppers were out-rebounded 39-26. The Panthers had 21 second-chance points.

The Hilltoppers handled Charlotte (17-13,10-8 C-USA) and Rice (15-15, 7-11 C-USA) pretty easily in the three matchups they had with them, two against Charlotte, one against Rice. WKU won those games by double digits in all three, an average of 14.3 per victory.

Dayvion McKnight led the Hilltoppers with 23 points, five rebounds, five assists and three steals. Jamarion Sharp had 13 points and seven rebounds. They were the only Hilltoppers to score in double digits.

WKU finished the game with a higher shooting percentage but finished -24 in three-point shooting, going 2-of-12 for the game. North Texas’ bench proved to make a difference, outscoring WKU 21-2. UNT finished with nine steals and caused 15 turnovers leading to 13 points.

UNT is led by All-Conference First Team member Tylor Perry who averages 13.7 points, 2.7 rebounds and 2.7 assists. He scored 13 against WKU.

UTSA (10-21, 3-15 C-USA) and Southern Mississippi (6-25,1-17 C-USA) will face off in the play-in game to determine Florida Atlantic’s opponent in the quarterfinals. FAU beat both of those teams in the regular season, 73-64 against the Roadrunners and 84-57 against the Golden Eagles, respectively.

The favorite of the tournament, UAB (24-7,14-4 C-USA), awaits the winner of that matchup. UAB beat all three of those teams in the regular season.

If everything goes according to the projections, the Blazers and Blue Raiders will meet up in the semi finals. If WKU can win its two games, it would most likely meet either UAB or MTSU in the championship.

WKU lost all three of its matchups this season against those teams, two against MTSU and one against UAB, respectively.

MTSU was the last loss WKU had before ripping off its seven-game win streak. MTSU also was the team to end WKU’s win streak towards the end of the season. The Blue Raiders beat WKU by eight points in Diddle Arena and 17 at home, albeit against a depleted Hilltopper roster.

MTSU is led by All–Conference Second Team member Josh Jefferson who averages 14.6 points, three rebounds and two assists. In his two matchups against WKU he put up a combined 41 points, 31 coming in the first matchup.

On the other hand, UAB came into Diddle Arena and won on a game winning three-pointer from All-Conference First Team member Jordan Walker. UAB won 68-65 off the back of Walker who put up 21 points.

WKU had the advantage in almost every important category, but going 11-of-17 from the free throw line and starting 0-of-5 from the line in the second half ultimately made a big difference.

La Tech will play the winner of Marshall and FIU and WKU will face the winner of that matchup. The Hilltoppers will play on Thursday night at 6 p.m. and the game will be broadcast on Stadium.