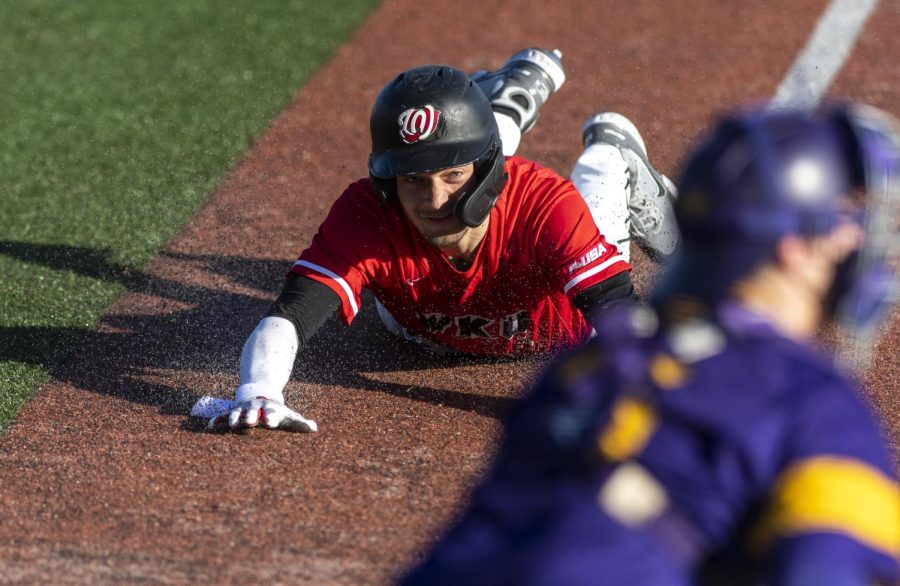 WKU sophomore infielder Eric Riffe attempts to slide into home plate, ultimately getting out before being able to score during the game against Western Illinois University at Nick Denes field on Feb. 20, 2022.

EKU (8-5) defeated WKU Baseball (7-5) 6-4 Tuesday in a close-fought battle at Earle Combs Stadium in Richmond. WKU was bested by EKU in a bullpen game in which 13 combined pitchers were used. The loss ends a five-game win streak by the Hilltoppers.

Milburn allowed a single to sophomore Aidan Gilroy in the first, but nothing else as he struck out two in the inning. Duby sat down the Colonels in order in the bottom of the first, striking out two.

Milburn allowed two base runners in the top of the third on an error and a hit by pitch, but the Hilltoppers failed to score again. Sophomore Max Williams led off the bottom of the third with a single. Thomason followed with an RBI double. King got his second RBI of the day in the next at bat on a single to give EKU a 3-0 lead. With two outs in the inning, senior Aristotle Peter relieved Duby. Peter ended the inning with a strikeout.

WKU opened the fourth inning with back-to-back singles by Delaney and junior Jackson Gray. Milburn walked the next batter to load the bases. Freshman Brett Blomquist followed with an RBI fielder’s choice, making it 3-1. Later in the inning, junior Matthew Meyer tied the game at 3-3 with a two-run RBI single. Milburn retired Gilroy to end the top of the fourth.

Peter returned to the mound for WKU in the bottom of the fourth. Peter allowed a one-out single and a two-out walk, but the Colonels failed to score.

Thomason led off the bottom of the fifth with a double. Junior Charlie Ludwick knocked Thomason in with a one-out single up the middle. Sophomore Luke Stofel relieved Peter with two outs in the inning and allowed an RBI triple to sophomore Ron Franklin, extending the EKU lead 5-3. Stofel struck out the next batter to end the inning.

Stofel walked the first batter he faced in the bottom of the sixth. Sophomore Dalton Mesaris replaced Stofel with one out in the inning. Mesaris walked a batter then allowed an RBI single to Thomason, making it 6-3. Junior Hunter Crosby entered the game with two outs and retired the first man he faced to end the inning.

Sophomore Bryce Travis started the top of the seventh on the mound for the Colonels but was relieved by sophomore Garrett Langrell after loading the bases with two walks and hitting a batter. Langrell walked the first batter he faced, pushing in a run and making it 6-4. Langrell was able to end the inning by forcing a 6-4-3 double play. Crosby retired the Colonels in the bottom of the seventh to end the inning.

The Hilltoppers went down in order again in the top of the ninth to give EKU a 6-4 victory. The win for EKU snaps a three-game losing streak against the Hilltoppers.

Up next, the Hilltoppers will head back home for a three-game weekend set against Illinois beginning Friday at 3 p.m. at Nick Denes Field.