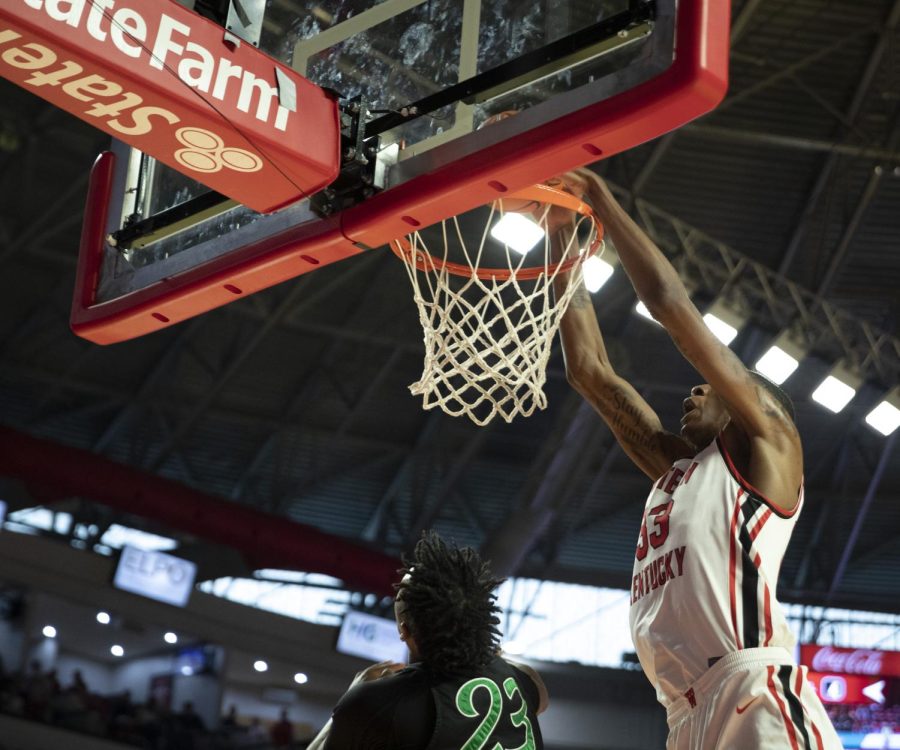 Sophomore Keaston Willis led the Bulldogs with 17 points while freshman Kenneth Lofton Jr. finished with 15 points and 12 rebounds and the go-ahead bucket for the win.

“You can chop it up a lot of ways, [but] it’s hard to overcome a good team, [when we go] 3-of-21 from the three-point line,” WKU head coach Rick Stansbury said. “We’re a team that depends on making some threes, and we go 12-of-19 from the foul line, so those are two areas you have to overcome.”

It was a bad shooting night for the team from Bowling Green.

La Tech came out guns blazing to start the game, getting an early 12-4 lead in the first three minutes. The Bulldogs started 4-of-6 from three-point range with Willis making three of them. WKU started 2-of-7 from the field with McKnight and Justice the only two who scored before the first media timeout.

The Bulldogs on-ball defense kept the Hilltoppers from driving into the paint while trying to work off the pick-and-roll and kept them from finding the mid-range shot or basket down low to junior Jamarion Sharp. On a few occasions, WKU found itself open behind deep, but the shot just wasn’t falling.

The tenacity and hustle of the Hilltoppers kept them in the game. They forced turnovers and created fouls, finding themselves in the bonus while only fouling the Bulldogs three times with five minutes left in the half.

WKU created four turnovers in two minutes that helped catapult the team to a 7-0 run, highlighted by Justice knocking down the teams’ first three of the game at the 4:03 mark and turning it into a four-point play to bring the deficit to seven.

La Tech did not have a field goal in the last 3:09 of the first half. WKU created 12 first half turnovers that led to 14 points while only turning the ball over five times. Justice hit both of WKU’s threes in the half with the second one coming with nine seconds left.

WKU trailed 36-33, a one possession game at halftime. The Hilltoppers hit 7-of-8 free throws in the first half.

The plan for the Bulldogs seemed to be to play through the big man Kenneth Lofton Jr. as he used his build to overpower Sharp’s height and to get him into foul trouble. That plan didn’t work early on, which allowed WKU to tie the game for the first time since it was 2-2 at the beginning of the game.

WKU still struggled from behind the arc but McKnight was aggressive, going downhill and drawing fouls and getting to the free-throw line. The Hilltoppers started 0-of-5 from behind the arc in the second half before Anderson knocked down the first one, giving WKU its first lead of the game, 50-49 with 9:34 left.

Lofton changed his game up, moving Sharp out with him to the high post, which proved effective as he knocked down a couple jumpers. McKnight stayed aggressive on the other end, attacking his defender, allowing him to get shots in the paint.

Lofton drove to the baseline with 23 seconds left, bodied Sharp a couple times and laid the ball in to give La Tech the lead. With six seconds left, Jamarion Sharp was fouled and sent to the free throw line, but he missed both to force WKU to foul immediately.

Lofton went to the free throw line and knocked down both shots. WKU had one more chance to tie or win the game but missed at the buzzer, ending the season.

WKU shot 3-of-21 from behind the three-point line while La Tech shot 9-of-22, an 18-point difference. WKU created 20 Bulldogs turnovers while only having 11. The Hilltoppers only had two assists for the game. WKU finished the last 3:47 without scoring a point.