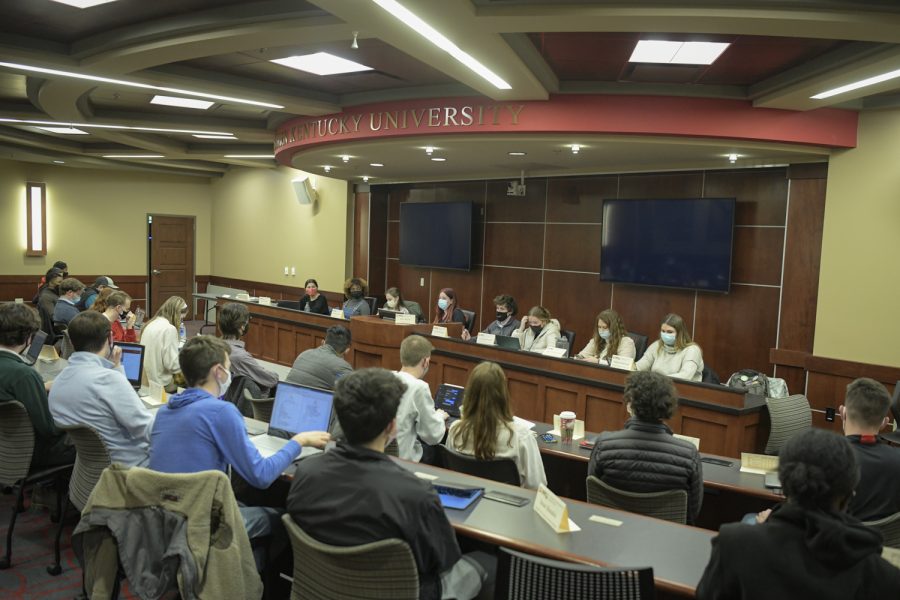 Members of WKU’s Student Government Association meet on the evening of Tuesday, Jan. 18 2022, at the Student Senate Chambers on the second floor of Downing Student Union at WKU.

The Student Government Association met on Tuesday afternoon for its first meeting following spring break. The SGA approved funding for an Easter egg hunt, a Mahurin Honors College scholarship and authorized its support of an LGBTQ+ admissions fair.

Tania Basta, dean of the College of Health and Human Services, came before the assembly at the start of the meeting to provide information about the Wellness Navigator Program.

“The idea is that first-time freshmen [will] go to the program and have a mentor, advisor or somebody to help guide them through things that aren’t academic related,” Basta said.

This new program is designed to help freshmen get engaged and navigate the different divisions of wellness. The idea came about due to the social disconnect brought on by COVID-19 and quarantine.

Resolution 9-22-S was passed unanimously, authorizing the SGA’s support of WKU Admissions in an LGBTQ+ outreach admissions fair. The fair will help incoming students who are part of the LGBTQ+ community to better understand that WKU is a safe space for them.

The SGA voted unanimously in favor of Bill 18-22-S, allocating funds for the Diversity & Inclusion Mahurin Honors College Membership Fee Scholarship. The SGA will put $1,500 towards this scholarship to help cover membership fees for students in the college.

Bill 22-22-S, seeking to amend the SGA constitution, was unanimously approved. The bill will amend the constitution to correctly reflect the duties of the Student Mental Health and Wellbeing Committee.

“The Student Mental Health and Wellbeing Committee shall serve the student body by addressing matters of wellbeing through a holistic approach to wellness in order to create a culture of wellbeing at Western Kentucky University,” Bill 22-22-S states.

The SGA voted unanimously in favor of Resolution 10-22-S, which would add a food insecurity related clause to course syllabi.

The clause will point students towards available campus resources to fight food insecurity such as the website address of the meal swipe request form and information regarding the WKU Office of Sustainability.

The SGA debated and voted on Bill 36-22-S, which allocated $500 to help fund an Easter egg hunt on April 1 titled “Hilltopper Hunt: Egging out Hunger for Kentucky Veterans Brigade.” The bill was passed and funding was further amended from $500 to $750.

Students can bring three canned goods items in exchange for a basket to use in the egg hunt. Eggs will contain raffle tickets and a golden egg containing a grand prize will be awarded to the student that finds it. If a student does not have canned goods to bring, they can still pay $5 to play. All proceeds will go to the KVB.

“We’re also partnering with the ROTC to try [and keep] this program going long after they graduate WKU because KVB and the WKU food pantry used to have an established relationship,” senator Calleigh Powell said. “We’re trying to work that relationship back up. We want to try to hold an event every year for KVB to rely on the students to show their support for the veterans in the Bowling Green community and to our own ROTC and veterans at WKU.”