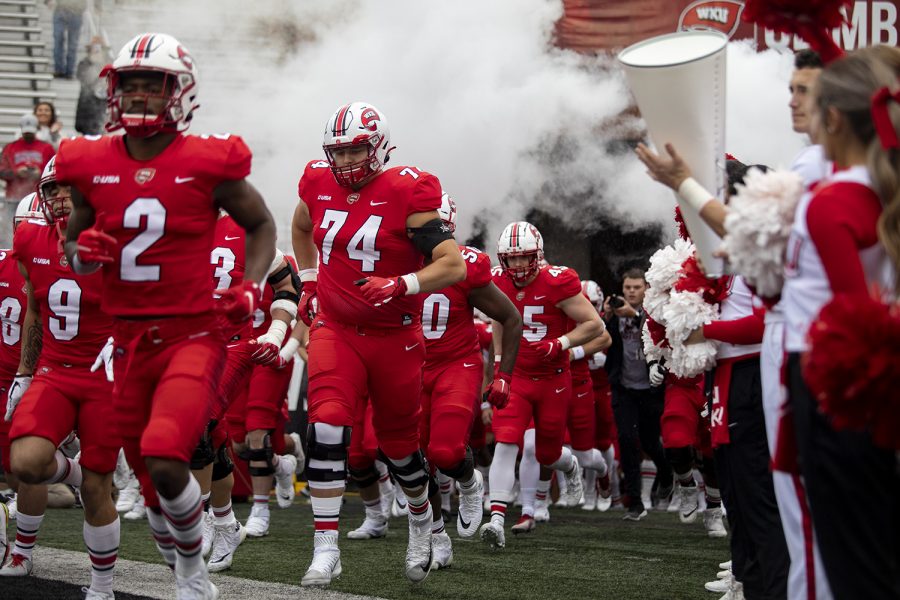 Western Kentucky University football team steps onto Feix Field in Houchens-Smith Stadium before the 2021 homecoming game against the Charlotte 49ers on Oct. 30.

The Hilltoppers’ new co-offensive coordinator Ben Arbuckle was really encouraged by the energy and effort from the guys on the field. He said he was excited to see things learned in the meeting room translate onto the field at high level and attention to detail.

With WKU coming off a record-breaking season, Arbuckle’s expectation is to see older players become and grow as leaders in 2022 while wanting to see the transfers and freshman find their “niche” and place on the team. Learning under former WKU offensive coordinator Zach Kittley, Arbuckle said his offense will be the same for the most part with a few tweaks here and there.

“We want to do the same thing,” Arbuckle said. “We want to be explosive, we want to put up a lot of numbers, but at the end of the day that doesn’t come if we don’t do everything right out here first. It’s been really good. They’ve matched every expectation I’ve had so far.”

One of the newer faces on the offense is former West Virginia quarterback Jarrett Doege, who transferred to Hill in January. He said he chose WKU because he believed in what WKU head coach Tyson Helton was doing with the program and his prior relationship with Arbuckle.

Helton said Monday he wouldn’t announce a starting quarterback until the fall. Arbuckle said he wants guys who love football “first and foremost,” because it will make them want to learn more and become better. Even with the competition, Doege has been building bonds in the quarterback room.

“I really like this room, because there’s a ton of different personalities and guys you can learn from that have been in the system, guys that haven’t been in the system that are going with you and you can bounce questions off an experienced guy or an inexperienced guy in the offense,” Doege said. “It’s a ton of competition in that room, a lot of laughs, a lot of competition. I’m excited to be a part of it.”

Doege said the offenses between WKU and West Virginia are similar, but he’s excited to play with an even higher tempo offense on the Hill. He’s been building “really good” chemistry with his pass catchers. The transition has been easy for Doege because of how accepting the team and his pass catchers are to him.

With top receivers Jerreth Sterns declaring for the NFL Draft and Mitchell Tinsley transferring to Penn State, Arbuckle saw players making the most of the new opportunities granted to them.

“The receiver room is super encouraging,” Arbuckle said. “Coach [Josh] Crawford and coach [Zak] Mizell [have done a] phenomenal job. The tight end room, Coach [Andy] LaRussa moved to our tight end room, and he kind of got an experienced room with Joey Beljan and Josh Simon – and of course we’re thrilled to get Josh back, but watching Joey and River [Helms] get all those reps in Josh’s absence, it’s great for their development.”

The offensive line for the Hilltoppers has had some turnover too. Redshirt junior Rusty Staats has seen a lot of energy and a lot of good competition early on. He said redshirt junior Gunner Britton has stepped up through the first couple of days in spring ball.  Sophomore Quantavious Leslie embraced being a starting player last season.

“I think when he first started playing he was a little bit more timid and stuff, still a great player but now he’s just really stepped up,” Staats said. “First of all in the offseason, we lift together every day. Dude works his butt off every single day and then he’s out here just dominating people.”

Arbuckle said he really likes the competition out of his offensive line throughout the first couple of practices.