‘I feel like we take that for granted, how healthy we are’: Greek Week blood drives hope to combat shortage 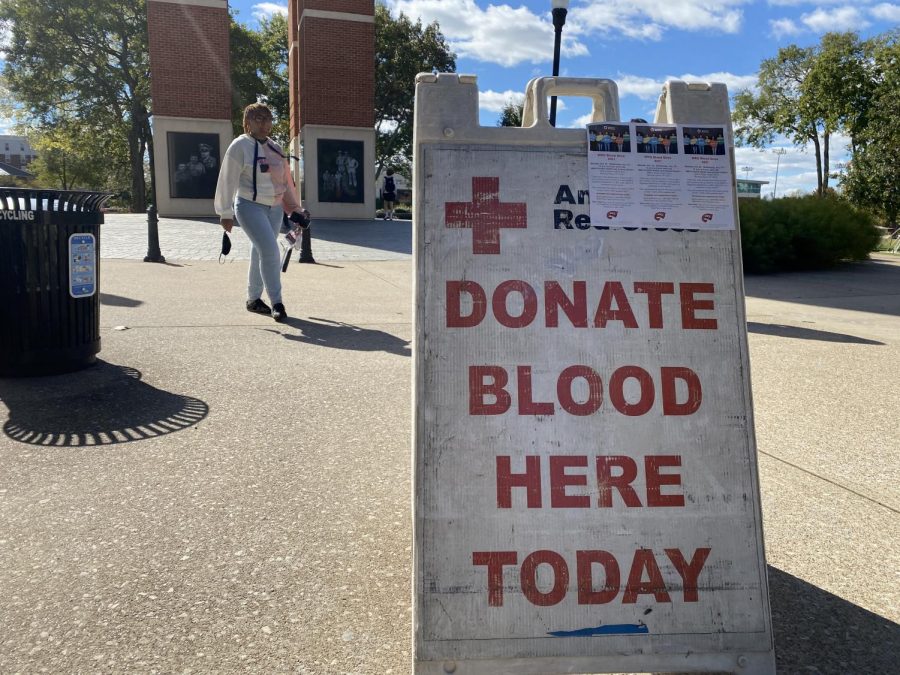 WKU Greek Life is holding two separate blood drive events as part of Greek Week. The first of which is on Monday, March 28 and is referred to as the “Tug” blood drive, and the second will be held from April 18-20 from 11 a.m. to 6 p.m.

Since the start of the COVID-19 pandemic, the American Red Cross has faced its worst blood shortage in over a decade, with a 10% decline in overall donation since March 2020.

This is in part attributed to the cancellations of student-driven donation events at colleges and high schools, a 62% drop in these blood drives since the pandemic. This drop in donation events has limited student donation opportunities, with students making up roughly 25% of donors in 2019 to just 10% during the pandemic.

WKU is working to combat this shortage through its annual four days of Greek Week blood drives, the totality of the event making it the third-largest in the country for the Red Cross.

There are two separate blood drive events organized under this same Greek Week blood drive. The first is on Monday, March 28 and is referred to as the “Tug” blood drive, and the larger portion of the event is from April 18-20 from 11 a.m. to 6 p.m. during the actual Greek Week.

Assistant Director of Student Activities and Greek Life Andrew Rash helps to organize and lead these blood drives, which have become a staple in WKU’s history.

“This blood drive has been around for decades, I was a college student in the early-mid 2000s, and the blood drive had been around decades before that,” Rash said. “Throughout its history, at least in my 15-20 years with it and I’m sure well before that, it’s been, again, one of the biggest. It’s always been attached to Greek week, but anyone can do it. It doesn’t just have to be Greeks, we have lots of faculty and staff that do it, lots of non-Greeks that do it, they just go in and donate blood.”

It is especially crucial that students and faculty become donors this year due to the Red Cross blood shortage. Rash encourages as many people as possible to consider giving.

“It’s going to be vital every year, but this year it’s especially vital,” Rash said. “The Red Cross [is] at a massive critically low blood supply; there is not enough blood coming in versus the need. Because of COVID, the blood supply has lessened dramatically because some places have had to cancel blood drives, various things because of the pandemic blood drives have been canceled and less people have gone. So they really need blood drives like ours and other ones too.”

Rash mentioned how donors can receive a text every time their blood is used to help someone in a nearby region–something that can truly encourage donors by showing them the real-life benefits of their actions. He also explained how the event is used to raise up a generation of philanthropists.

“We have people that come back and say that the first time they ever gave blood was during the Greek Week blood drive, and now give all the time… We are modeling the way of creating lifelong philanthropists, or lifelong people that do positive service,” Rash said.

To sign up to donate, visit redcross.org and type “WKU” into the search box, which will then allow you to choose a spot for one of the April dates and reserve a time slot. According to Rash, it’s important for donors to register beforehand so that the Red Cross can plan for enough people since this is already such a large event.

For Andrew Barker, a senior business management major who is helping with the Greek Week blood drive, the cause is a personal one.

“This is my first time really participating, I didn’t really have any interest in helping out with it before,” Barker said. “But my grandfather gets blood every week – he usually gets two pints every week, but due to COVID it really cut down. He was getting one pint or maybe one pint every other week, so when this opportunity arose and I felt like I could help out, it kind of hit home with me.”

Barker found this passion when he realized that many who are in need of blood are not able to receive it. As a college student, he recognizes that good health is a privilege not to be taken for granted.

“We’re all so healthy right now and able to give, and I feel like we take that for granted, how healthy we are,” Barker said. “I feel like we have to think about our loved ones, our parents, our grandparents, that are eventually going to need that blood. And eventually when we’re older, we’ll be needing blood the same way. I just want kids to be able to see that and see that they’re giving for a better cause… I hope they understand that when they give blood it is going to go to someone else so that they are healthier and able to have a brighter future.”