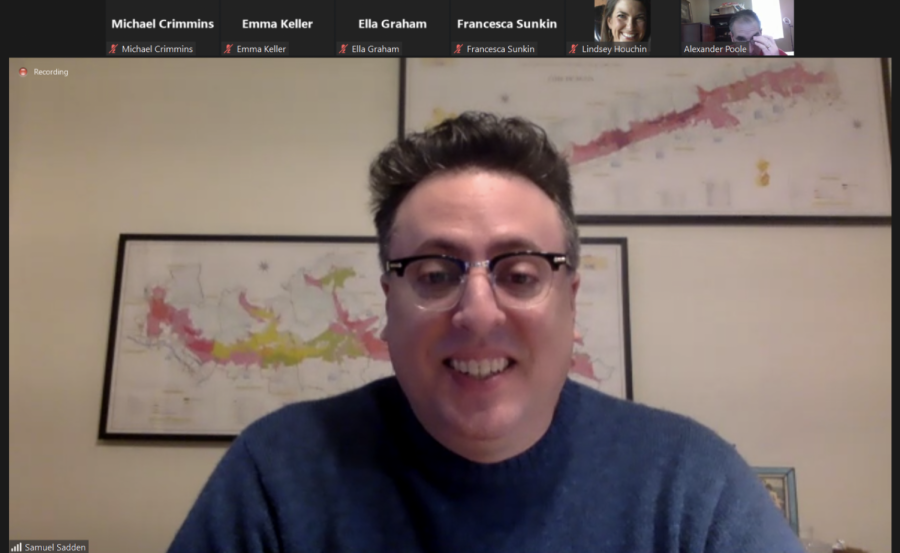 Samuel Sadden, a bilingual antitrust attorney, spoke with students about the importance of learning multiple languages in a talk hosted by the Department of Modern Languages on Monday, March 28.

Samuel Sadden, an American antitrust attorney and a consultant working in New York and Brussels, spoke to students about the ways bilingualism can help one’s professional career in a talk hosted by WKU’s Department of Modern Languages Monday evening.

Over the course of an hour-long Zoom session, Sadden spoke with Alexander Poole, head of the modern languages department, in a Q&A format over bilingualism.

“A lot of the things Sam is going to be talking about are not just germane to French but to all language learners,” Poole said. “So [we will be] looking at how you can combine different disciplines to build a career.”

“I have an older sister who also studied French and lived abroad,” Sadden said. “So, as a kid I got to see her bring home friends from France, friends from Japan, and it was just exciting to meet these people from different places and see my sister using French, and so once I got into high school I stuck with it.”

Sadden said he didn’t do too hot in his college French classes until he set goals for himself. Originally he planned only to complete the minimum courses required by the University of Michigan.

“I got a tutor and I said ‘look, I’m going to finish the requirement and then I’m going to do summer school after my freshman year in French and then go study abroad for the summer, then I’ll be done with language’,” Sadden said.

His plans changed quickly. Once he began studying abroad, he fell in love with the French language. Samuel said he would get a “language high” from conversing in a different tongue and having others respond to him.

To get better at the language, Sadden said students “should try and get out there, to do other things, test themselves, go see a French movie.” He said immersion is the key.

“An important thing is to try not [to] stick to your group of students,” Sadden said. “I’m not saying don’t hang out with them, but try to not just surround yourself with English speakers. Just try and get out in the community as much as possible.”

After studying abroad, he returned to New York briefly before deciding to go to law school at the University of Iowa. Sadden then became an attorney in Europe. His grasp of the French language was a key aspect that helped him during his time overseas.

“You can’t go to the law program in Europe if you don’t speak French,” Sadden said. “So that for me was like, ‘look, this is perfect.’”

From there he found himself in Brussels, the capital of the European Union. Poole said, and Sadden agreed, that to have the best shot at working in Europe you need to speak a second language.

“Once I was at the law firm in Brussels it [was] quite a mix,” Sadden said. “But it made a big difference to be able to speak French because there were some cases in English and some in French, and I could work on both of those.”

“We put out two short journals a month on different topics within anti-trust and we get people to write for us, and they’re academics, so professors, attorneys and then regulators from different anti-trust agencies,” Sadden said. “I basically herd very smart cats. ”

After the interview, Poole opened up for questions from the audience. Sadden reiterated the benefits to knowing a second language in the professional world.