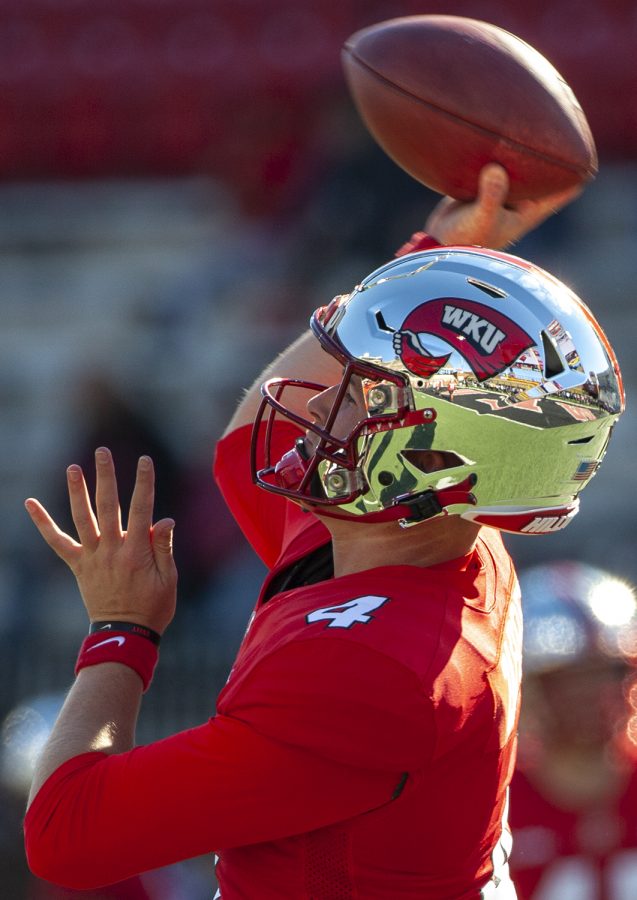 WKU had its pro day for many of its stars from the 2021 season on Thursday, including quarterback Bailey Zappe, defensive end DeAngelo Malone and wideout Jerreth Sterns.

They all showcased their talents and strengths as nearly every NFL team had a scout to watch the prospects for this year’s upcoming draft. WKU head coach Tyson Helton was extremely proud of the way his players performed, and he believes that he’ll hear multiple guys from his rosters’ names get called at the 2022 NFL Draft.

“I think we had all the scouts out here,” Helton said. “I was really proud of our guys, they really tested well and showed out well. It was great to have everybody out here. It was a great day for Western Kentucky and great to hear all the positive feedback from different scouts so just a great day all around, and I was really happy for the guys.”

Every player showed they can bring value to a NFL team. Of course, a lot of eyes were on the record-breaker himself, Bailey Zappe.

Zappe’s throwing day was nothing short of outstanding, making every throw with ease and with touch on a windy day. He completed numerous kinds of passes ranging from short, intermediate and deep ball with a couple of throws that made everyone say “wow.” He ended the day having completed 55 of his 56 passes.

“It’s been a fun process,” Zappe said. “This is something I’ve been dreaming for all my life, I’ve been playing football since I was five so this has always been a dream of mine. Going into pro day, I wanted to show off the arm, see what I can do in deep ball accuracy and accuracy all around the field. I wanted to be able to make every throw on the field no matter where I’m at, and of course show that I can take drops under center, play action and all that.”

The reigning two-time Conference USA Defensive Player of the Year DeAngelo Malone showcased his size, speed and physicality. The combination of all three is what impressed scouts the most. Malone recorded an astonishing 4.5 40-yard dash time that should catch the eyes of nearly every NFL team.

Malone’s cone time was a 6.9 and his shuttle time was a 4.2. Even though the times were unofficial, he had an excellent day and met with many scouts when he was finished. The WKU all-time sack leader is currently the 64th overall player on ESPN’s draft board.

“I felt like it went very well,” Malone said. “I was very well prepared, and I feel like I went through the drills pretty fluently. I don’t want to say it now, but there’s plenty of teams looking at me.”

Jerreth Sterns also performed well in front of his peers. The standout receiver showed his physical tools and his hands throughout the day. Sterns’ 40-yard dash time was an impressive 4.4, showing off his speed.

When it was time to catch passes from Zappe, he delivered from all spots on the field. Although he didn’t receive a combine invite, Sterns believes that he is right where he wants to be.

“It was good, it’s been a long three months,” Sterns said. “I’ve been working. I kind of wanted to prove some people wrong. Athletically, I think there were some doubts, but I think I did that today and I’m still waiting on the official times and everything, but it started off well with the good vertical so I’m happy.”

WKU will continue its spring practices and will hold its annual spring game on April 23.