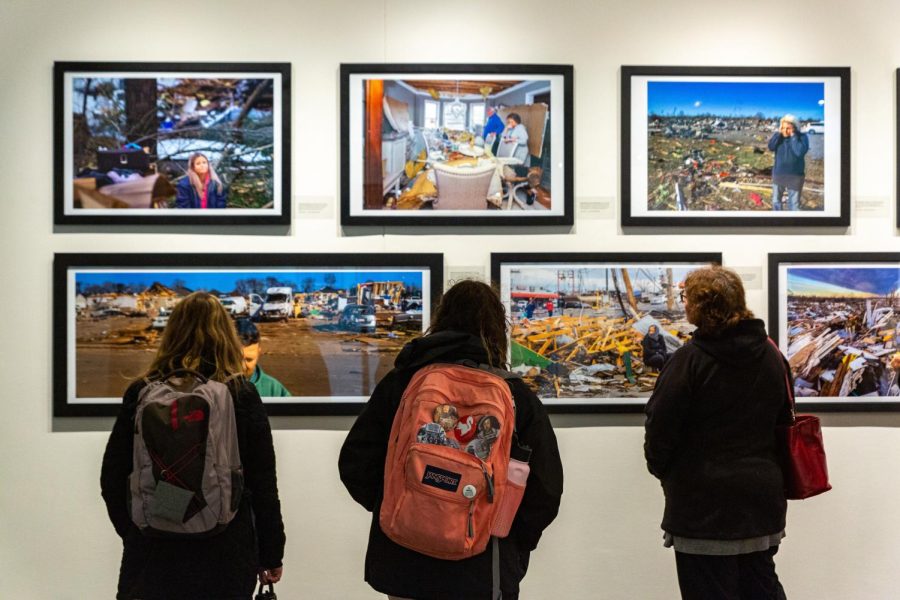 Western Kentucky University’s School of Media gallery, A Community United, opens its doors for the first time on March 31st. The gallery features photographs from all over the commonwealth showing the devastation following the tornado on Dec. 10th, 2021.

By God’s grace we survive.

The phrase was spray-painted across the door of a Bowling Green home left gutted and roofless after the December 2021 tornado outbreak. Grace Ramey, a photographer for the Bowling Green Daily News, captured the scene as she wandered her own devastated neighborhood.

Ramey’s photo now hangs in the lobby of Jody Richards Hall, part of the School of Media’s most recent gallery about the disaster. Dozens of photos of struggle and hope from across the state are on display, submitted by career and student photojournalists.

Ramey left her home for the first time the morning of Dec. 11 to find her neighbors’ homes leveled and battered beyond recognition. She watched as volunteers and rescue crews poured in to search the rubble.

“[I saw] these men and women — brave men and women — come in with no thought for themselves, they were just so concerned with finding these people and helping them,” Ramey said, holding back tears. “Inspired by that, I thought ‘I need to be doing the same thing in my own way,’ and that was to go and grab my camera.”

Ramey spoke at the John B. Gaines Family Lecture Series installment, “When Disaster Strikes: Reporting community stories during the tornado”, held on March 31 in conjunction with the gallery.

Rojas has had no shortage of disasters to cover in the last year — he reported on Hurricane Ida in New Orleans, the Surfside condominium collapse in Miami and flooding in Waverly, Tennessee. He traveled to Mayfield following the tornado to “tell the story of people” who live there.

“It was just one [destroyed building] after the next, how can a place really rebuild after that?” Rojas said.

The role of community-based journalists is a vital one, Rojas said. Journalists who know and live among the community use their writing to “tell a story that no one else can” and do so while also dealing with their own trauma and loss.

As a national correspondent, Rojas has a different role, but one no less important.

“I think there’s something cathartic about, after going through something that’s so rough, having an outsider want to understand, and having another human want to hear what you have to say,” Rojas said.

It’s easy for disaster reporting to fall short of capturing the deeper meaning behind the devastation, but Rojas said the real goal should be capturing humanity. The hardest part of reporting comes during the arduous recovery process when many news outlets start to move their attention elsewhere.

Stories about mental health, state aid programs, recovery efforts — “stories of hope” — are what Rojas feels are most important following a disaster.

“It’s difficult to tell these stories, because how do you tell a story just about slog, trudging along, while still grabbing readers’ attention?” Rojas said. “But it’s really important because that’s where the suffering endures, and I think that’s what we need to focus our attention on.”

Okerson warned residents near Paducah about the likelihood of a tornado nearly seven hours in advance. In December, Gov. Andy Beshear announced 76 deaths in Mayfield from the tornado. Without Okerson’s reporting, that number would have been higher.

One couple stopped him on the street to tell him that thanks to his reporting, they sought shelter at a friend’s house down the road. While there, the couple’s trailer home was wiped away — “they could not find it,” he said.

“As broadcast meteorologists, we’re trying to prepare our viewers for the next round of threatening weather,” Okerson said. “There’s typically that mentality of ‘well, it’s not going to happen to me.’ We tell these stories, from our perspective, to remind people these things do happen, they do hit populated areas sometimes, and it’s important to know what to do and where to go and have a plan.”

Okerson said while many viewers knew the threat of tornadoes, no one anticipated they’d lose their homes and have their lives uprooted. Preparation and awareness are becoming more important each year as the growing rate at which disasters like this occur increases, Okerson said.

Sam Mallon, a senior photojournalism major featured in the gallery, visited Mayfield the evening of Dec. 11. She described looking over the rubble as feeling like she was watching a movie scene. She could not begin to grasp the magnitude of loss that was before her.

“I drove back home from Mayfield, going through Bowling Green, and it started settling in that this was a real thing that happened that’s going to affect people for so long, myself included,’” Mallon said.

The night before, Mallon had visited WKLiquors and ate Que Buenos for dinner, as she has for years. When she returned from Mayfield, she found both buildings completely leveled.

“You feel empty inside when you’re looking at all that emptiness,” Mallon said. “It was definitely a slow build, and the first 48 hours was just ‘go-go-go’. Then the second you have to decompress, you realize that this is going to be a long, slow process.”

“It gives the community a space, a moment in time, to collectively grieve as a community,” Mallon said. “The act of physically going and seeing this gallery together, rather than just scrolling through them on a phone, makes people really think about what they’re looking at.”

One gallery piece stands out from the rest, not because of what it depicts, but its lack of depiction. It is a blank white canvas, framed and hung alongside the other photos. It is what the public would have seen if not for journalists like Ramey, Okerson, Rojas and the many gallery contributors.

“These are the images that we will remember this by, and my goal was to make sure that this is something that’s remembered and understood,” Broekema said. “It’s not like you can do anything [to stop it], it’s a tornado and another one can hit again, but you can certainly remember what happened to your town.”

“Unreal” was the only word Broekema felt was right to describe the aftermath in Mayfield and Bowling Green, where he has lived, worked and raised a family for 30 years.

Broekema was “lucky” to have come out unscathed — he did not lose loved ones nor his home — but had the tornado’s path had curved slightly, he would have found himself within its sights. Held-back tears formed in his eyes as he spoke.

“I would’ve lost my house, we would’ve lost campus, I would’ve lost my job, students wouldn’t be going to class. Those are the things that I’m astonished by, these little moments in time that make all the difference for the next weeks, years, decades of your life,” Broekema said.