‘I was finally able to truly express myself when I came here’: WKU’s LGBTQ+ students find freedom in expression 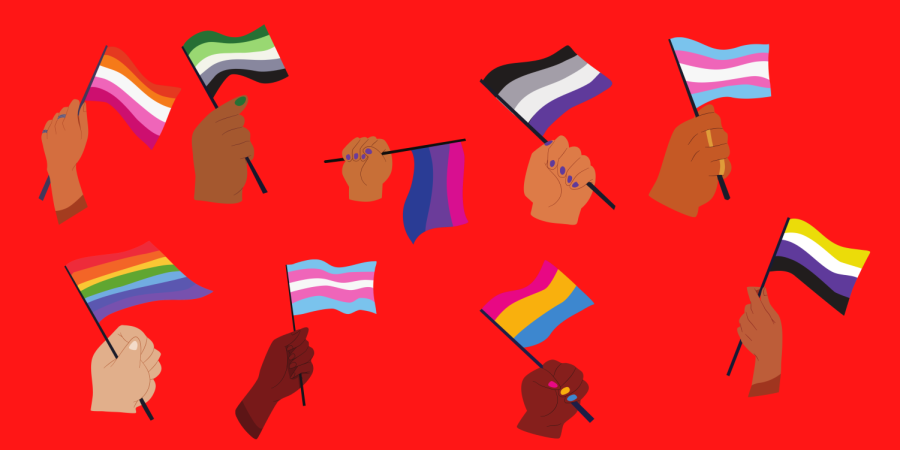 Editor’s Note: The original version of this story included incorrect pronouns for two sources. The story has been updated with the correct pronouns. The Herald regrets the error.

Members of the LGBTQ+ community constantly fight to be accepted by their peers, communities and networks. Western Kentucky University has provided a place for them to feel whole.

Junior Airelle Railley says their experience with the LGBTQ+ community on campus has been a rewarding one due to being able to find a community that allowed them to express theirself without restraints.

“It’s been pretty rewarding, I was able to find a community quickly here,” Railley said. “I feel like the honors college has allowed me to live without any fear or worry or judgment from my peers, faculty, and staff.”

Railley is a member of Out in Honors, a student organization in the Mahurin Honors College for members and allies of the LGBTQ+ community. Railley said having the overall support of the college feels great.

“I live in an apartment with three other girls who are in the honors college, I’m around these people and developing relationships with people who are like me,” Railley said.

For Railley, their self-identification came at the early age of 13, when they knew they were gay. Due to Railley’s religious upbringing, they were told to turn away from those who were not heterosexual.

“I remember going to school and I had always seen couples and I was jealous,” Railley said. “I was scared to be judged. I later came out in my senior year, because I was leaving anyway. I was finally able to truly express myself when I came here, rather than my hometown.”

Railley is grateful for the sense of community but would like for people to stop generalizing all LGBTQ+ students. As a mixed-race, genderfluid and pansexual person, Railley has faced their fair share of stereotypes.

“We’re stereotyped… that we’re not normal, when in fact this is the most normal I have felt in a while,” Railley said. “I’m comfortable in my skin.”

Sophomore Alistair Flowers grew up in a religious household where they couldn’t openly express themself in terms of their sexuality. They saw WKU as a way to finally be open about who they were.

“Coming here, it was an opportunity to be open about it, even if I did feel a little bit isolated with not finding a lot of queer people of color,” Flowers said. “It was kind of an experience of trying to find people who look like me and also identify similar to how I am or understand my identity.”

Flowers decided to join the Queer Student Union, a student organization with the goal to improve student life for all gender identities, expressions and sexual orientations through various initiatives.

The goal of having a community was met, but Flowers wanted to accomplish another goal of meeting other queer people of color, a task that they found difficult at WKU. Flowers often felt isolated due to the lack of people of color within the queer community on campus.

Despite this setback, Flowers is still grateful for the community that they are a part of.

“It’s a pretty welcoming place, you’re not always going to find people that are like you or people that you’re going to like, but it’s welcoming and understanding in the ways that are most important when it comes to recognizing your identity,” Flowers said.

Self-definition has been an important concept for Flowers due to their childhood. Now that they are in a different position, Flowers now knows that the validation of others holds no weight.

Ashley Austin, another member of Out in Honors, says that people should be willing to learn more and be open-minded, especially with sexualities and gender identities they may not be familiar with.

“When you think you know everything there is always something to explore and learn more, so go into it with an open mind,” Austin said.

As an asexual, homo-romantic person, Austin had to educate herself on asexuality as well as battle its stereotypes.

“Asexuality doesn’t mean you or sex negative or that you hate sex, it just means you lack sexual attraction to any gender,” Austin said. “That doesn’t mean you can’t have any romantic feelings for any gender. We’re not aliens. We’re just two people in love. I feel like as a community we still have a lot to educate ourselves on.”

“It has been an incredible experience working with LGBTQ+ students in Stonewall Suites, these students are always so welcoming and friendly,” Hooks said. “I love hearing their stories and seeing them connect with one another in the residence hall and on the Hill. I’m thankful for the experience to interact with so many diverse students.”

To further the efforts to make students more comfortable, Hooks said that every student is interviewed before joining to ensure that they will be a supportive member of the community. Some interview questions include asking for their preferences and what they hope to gain from the Living and Learning Community.

“We find this helps students feel comfortable, especially when it’s their first time at WKU,” Hooks said. “Every year we evaluate and assess the needs of each LLC and determine the best residence [halls] for the upcoming year.”

Students within the queer community are appreciative of the advancements but would like to see more inclusivity for people within their community. For example, Flowers thinks that Stonewall Suites could be run in a different manner to allow more queer people access to gender-neutral housing.

“…It’s become something more competitive for people to get into,” Flowers said. “There is also an issue of affordability. The fact that the only set of queer housing on campus is largely unaffordable, there’s kind of this issue of accessibility to certain queer spaces, which I think is really unhelpful. There are a lot of places on campus where the campus could do more to help support students on the campus.”

Despite what others say, queer students on campus are grateful for the safe space provided by the community. With the support of various people and organizations, queer students are able to thrive.

“There are a lot of people out there that will support you, coming here in general, no one is questioning you about who you are, they just accept you as you are,” Railley said. “I think people will never know the number of people who are in their corner until they go and look for them. They are everywhere.”