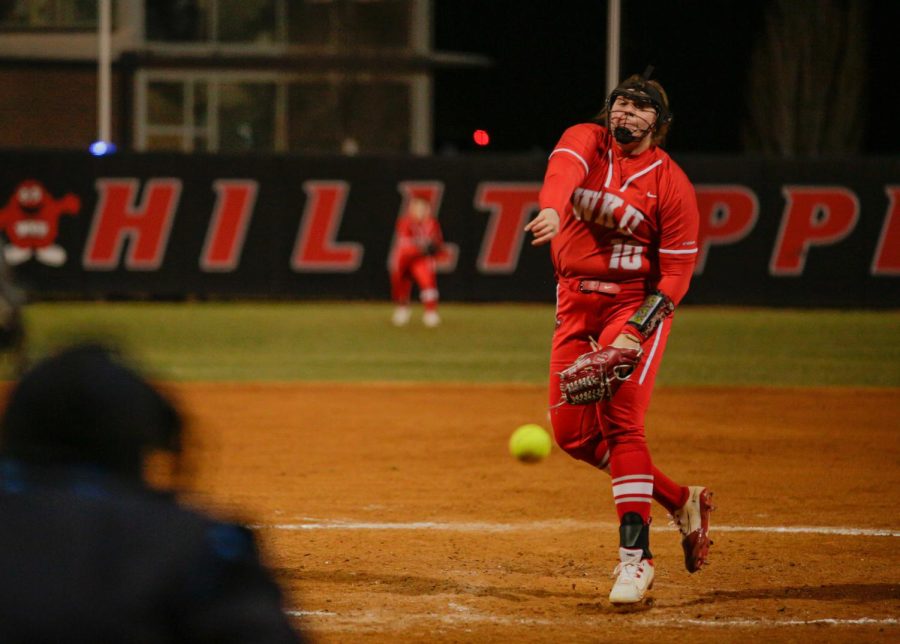 WKU Softball's 5th year pitcher Shelby Nunn (10) makes a pitch to home plate during their matchup with the Bellarmine University Softball team on Feb. 18 at the WKU Softball Complex.

WKU Softball’s very own fifth-year senior Shelby Nunn was named Conference USA’s Pitcher of the Week for the second time in 2022, the league announced Monday.

This marks the fifth time a Hilltopper was named a C-USA weekly award winner this year.

The honor comes right after a phenomenal weekend for Nunn and her teammates against Florida International. Nunn appeared in 10.2 innings over three games and gave up an absurd 0.66 ERA.

The Hilltoppers swept the Panthers in the weekend series thanks to Nunn’s work in the circle. She started games one and three on Friday and Sunday. Nunn pitched 5.2 innings Friday night, giving up one earned run and had five strikeouts. Nunn pitched a complete five-inning game shutout in a run-rule win over the Panthers on Sunday to close out the series.

The weekend marked Nunn and her team’s second sweep of the season and puts them back in first place in the East Division of C-USA with a 9-3 record in C-USA play and 25-7 on the season.

Nunn and the rest of the Hilltoppers squad will be back at the WKU Softball Complex on Wednesday, April 6 at 6 p.m. to face Belmont.