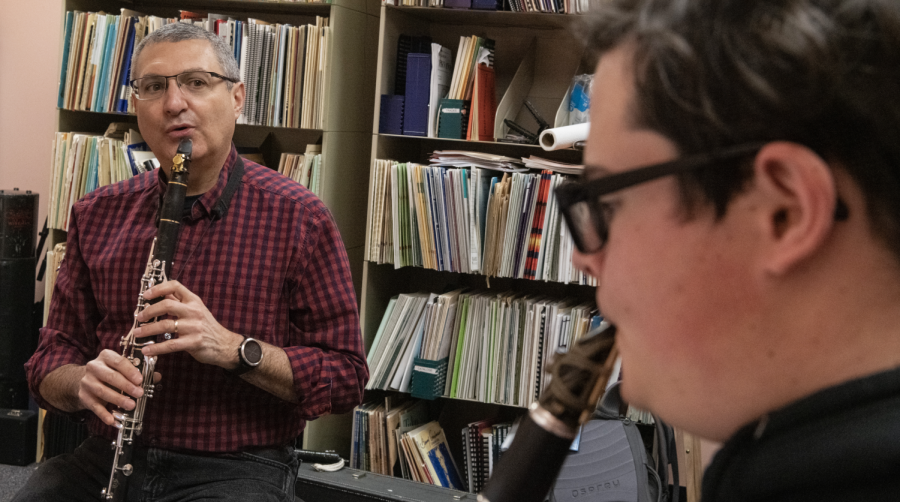 John Cipolla was announced as the university's distinguished professor on Wednesday, April 6. Here, Cipolla holds a one-on-one clarinet lesson with one of his students in his office on Friday afternoon, Jan. 28 of 2022.

John Cipolla, a music professor specializing in woodwinds, was awarded the title of university distinguished professor. He has recorded or performed with the likes of the New York City Opera, Aretha Franklin, Dizzy Gillespie and others and is a tenured member of the Radio City Music Hall Orchestra.

The excellence in teaching award was given to Trini Stickle, an associate professor and English for secondary teachers advisor in the English department. According to Stickle’s bio, her research focuses on “interactions involving persons whose communication processes are affected by acquired or developmental cognitive issues”.

Stickle’s bio states that her favorite course to teach is introduction to syntax because it is the venue where Stickle “can really ‘geek out’ and share some really complex aspects of language that we so often take for granted.”

Jennifer Hanley, an associate professor and undergraduate advisor in the history department, was announced as the winner of the excellence in student advisement award.

According to Hanley’s bio, she is “especially fascinated at how issues of race and gender have influenced our historical experiences” and Hanley’s work focuses on writing women and people of color “back into our history books.”

The excellence in research and creative activity award went to Joanna Phillips-Melancon, a professor in the marketing department.

According to Phillips-Melancon’s bio, her research focuses on consumer loyalty and nontraditional marketing media, “specifically social media”. She has published fifteen articles and four have appeared in top-ten marketing journals and have been cited “over 875 times and have been viewed or downloaded over 13,000 times online.”

Lauren McClain, associate professor in the Department of Sociology & Criminology, was named as the winner of the excellence in service award.

Finally, Jessica Hussung won the excellence in part-time teaching award. Hussung was given the honor due to her work in the School of Teacher Education.

According to Fischer’s announcement, the winning faculty will have their work and achievements recognized at the Employee Excellence Dinner on April 12, 2022.