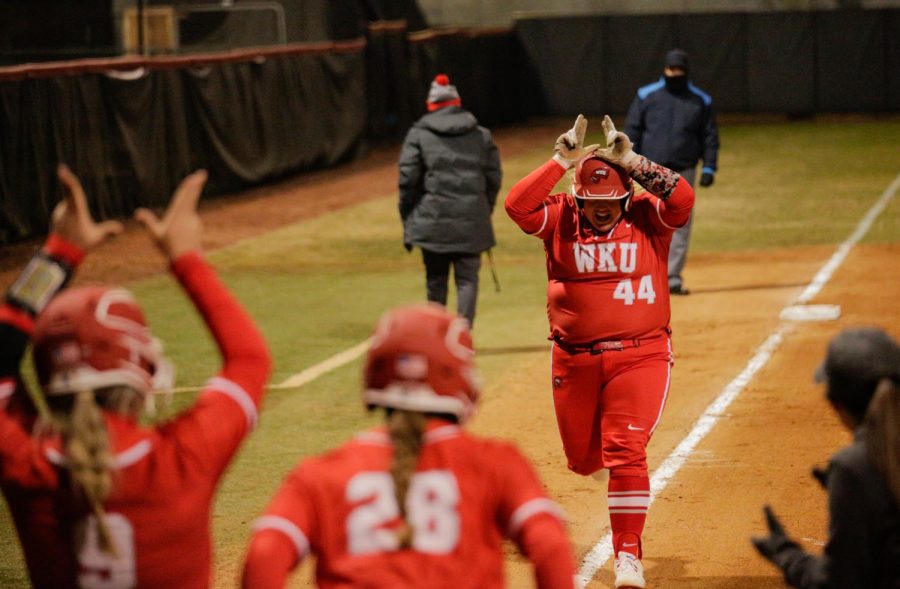 WKU Softball's fifth year utility/catcher Bailey Curry (44) celebrates with her teammates after hitting a three-run home run during their matchup with Bellarmine University on Feb. 18 at the WKU Softball Complex.

WKU is now ranked 27-7 in the season overall, and 11-3 in conference play, sitting in first place in the East Division of C-USA.

The Blazers (20-15, 8-3 C-USA) put out an array of pitchers to try and stir up the Hilltopper offense. Junior Makenna Pierce started in the circle for 3.1 innings, allowing three runs on three hits. Junior Bailey Tindell threw two innings, giving up five runs on three hits and also had five errors before redshirt freshman Arden Plugge wrapped up the day, allowing two runs.

Junior Katie Gardner threw a complete game for the Hilltoppers. She only allowed one run on four hits.

The Blazers took the first lead of the day in the bottom of the first on an RBI double by junior Faith Hegh. After the early run, UAB went cold at the plate for the rest of game, only getting one hit and five base runners the rest of the way.

WKU did the opposite, starting slow with two three up, three down innings to start before fifth-year senior Maddie Bowlds recorded the first hit for the Hilltoppers in the third inning. WKU didn’t convert the hit into a run.

With the game gone cold, the Hilltoppers finally stepped up in the fourth inning. Fifth-year Bailey Curry came through with two runners on base to hit a three-run RBI home run, giving WKU a 3-1 lead. Freshman Randi Drinnon knocked in two runs herself later in the inning on a two-run RBI triple that put the score at 5-1.

Neither team put anything on the board in the fifth inning with both the Hilltoppers and the Blazers going down in order.

The sixth inning brought excitement and lots of scoring for the Hilltoppers. Bowlds struck an RBI single before Drinnon knocked Bowlds in with an RBI double. A single put runners on the corners and senior Taylor Davis put two more across with a two-run RBI double. Davis moved to third on a single before scoring a run on a double steal attempt to give WKU a 10-1 lead.

UAB went down in order in the bottom of the sixth, giving WKU a 10-1 run-rule victory.

To conclude the series, the Hilltoppers and the Blazers will play at 1 p.m. on April 9 in Birmingham, Alabama.