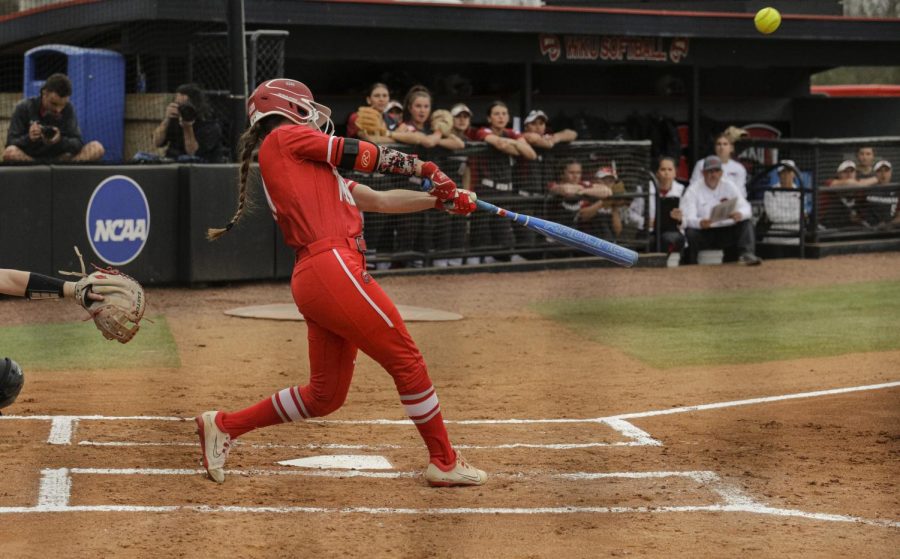 WKU Softball lost a high-scoring affair 9-7 to the University of Alabama at Birmingham Sunday afternoon, failing to complete a series sweep on the day.

WKU used four different pitchers throughout the day, starting off with junior Katie Gardner who was in the circle for 2.2 innings and allowed three runs on seven hits.

Blazer junior Sarah Cespedes pitched four innings, leaving with three runs on six hits before being relieved by freshman Olivia Valbak who threw 2.2 innings and allowed four runs on six hits. Junior Makenna Pierce picked up her first save of the season.

Both started slow with WKU going down in order and UAB putting two runners on base but failing to score.

The Hilltoppers quickly loaded the bases before sophomore Kennedy Foote knocked in the first two runs of the game in the top of the second inning with a two-run RBI double. UAB responded in the bottom of the frame with a Valbak RBI double to cut the deficit to 2-1.

The UAB bats continued to heat up in the third inning. With two runners in scoring position, junior Sierra Frazier drove in a run on a single before senior Jolie Readeaux hit in another run with a single of her own to give the Blazers a 3-2 lead.

With WKU failing to answer, UAB added to its lead in the bottom of the fourth. Two Blazer runners reached on an error and a walk before a run on an error. Frazier gave UAB a 7-2 lead on a three-run RBI home.

After a long scoring drought, the Hilltoppers finally cut into the deficit in the fifth inning. WKU put runners on the corners before junior Brylee Hage hit a sacrifice fly to score a run. In the top of the sixth the Hilltoppers cut into the lead further with an RBI double from freshman Randi Drinnon to bring the score to 7-4.

UAB loaded the bases with no outs in the bottom of the sixth before Frazier continued her great day at the plate, knocking in two more runs with an RBI single. The Blazers led 9-4 after six innings of the play.

In the top of the seventh, the Hilltoppers attempted a comeback but fell short. They scored one run on fifth-year senior Bailey Curry’s RBI single and another two on Foote’s RBI double. WKU lost with a final score of  9-7.

Up next, the Hilltoppers will look to redeem themselves with a mid-week matchup against Eastern Kentucky in Richmond, Ky, Wednesday at 5 p.m. CT.