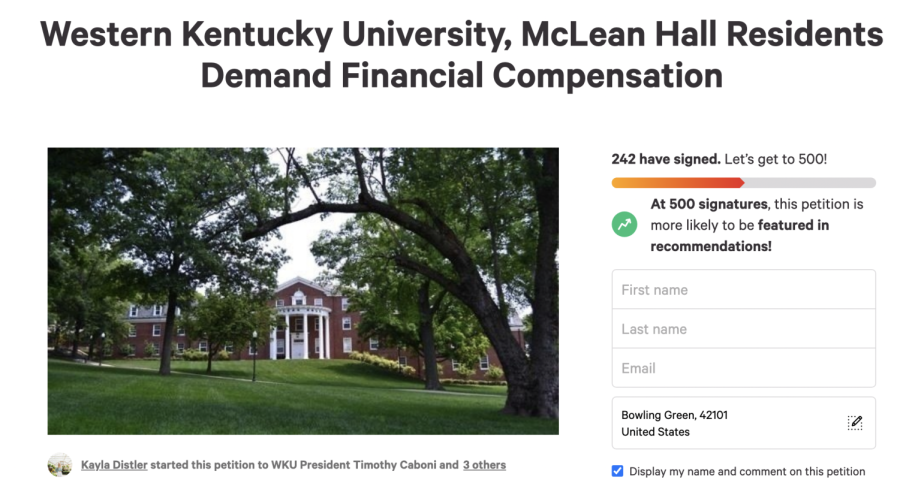 A petition regarding conditions in McLean Hall was started by WKU sophmore Kayla Distler.

Students in McLean Hall are speaking out with frustration about their living conditions during the 2021-2022 academic year.

Kayla Distler, a sophomore at WKU, created a petition demanding financial compensation for herself and other McLean Hall residents, citing issues with continuous mold, out-of-order laundry machines and hot water. The petition has gained over 200 signatures.

“During the time of mold, students from every residence hall were dealing with it,” the petition states. “When maintenance requests were submitted, it would be days before someone came to fix it. Mattresses were being covered in it and students were falling seriously ill. In order to get the mold taken care of, students had to beg maintenance to properly take care of it.”

The petition provides a timeline of events from August to now regarding issues in McLean Hall and the lack of answers for students.

According to the petition, in January of 2022, washing machines experienced issues that went unresolved “for days or weeks.” The petition goes on to say that the building has “over 100 residents and had to manage two washers at any given moment.”

The petition states that as of March 30, hot water was “unavailable in the entire building” and that water was “consistently cold, but lukewarm if you are lucky for a moment.”

According to the petition, an update on the hot water situation was given to residents on April 6. Residents were told that “two parts are needed and they are ordered, but there is no timeline available”. The petition goes on to state that residents are told hot water is available in the Preston Center showers, but the hours of operation were not realistic for residents.

Distler said one of her main frustrations was not knowing whether or not the maintenance requests she had made were being resolved.

“With all the problems on campus, it just seems like there’s radio silence from maintenance,” Distler said.

Distler said she has the maintenance phone number saved as a contact in her phone for easy access because she has sent so many requests this year.

Distler’s requests began back in August before she moved into McLean Hall. She sent her first maintenance request during her Top Drop and Go time slot because she found mold on her ceiling and walls.

Distler’s issues with maintenance continued as the year continued, which amplified her frustrations in the process.

According to the petition, students were “forced to wait with no transparency about what is happening.”

HRL was contacted for a statement regarding the petition, but the Herald was referred to WKU’s media relations office.

Jace Lux, director of media relations at WKU, was reached via email for comment on behalf of the university regarding the petition.

“The university is committed to providing safe and comfortable living environments for our residential students,” Lux’s statement reads. “WKU is aware of the petition currently circulating regarding McLean Hall. Housing and Residence Life staff members are in the process of meeting with residents to ensure their concerns are resolved.”

Distler has since been contacted by Housing and Residence Life to discuss her concerns. She said that Assistant Director for HRL, Blair Jensen, reached out to meet with Distler regarding the issues mentioned in the petition.

According to Distler, Jensen addressed five major ways HRL is looking to improve for the future and said she would follow up with Distler in a few weeks.

“That was kind of my biggest thing, just being heard and told that our problems are real and that it’s not our fault and that they know they can do better,” Distler said.

According to the WKU Housing contract terms and conditions, “the university agrees to respond to maintenance concerns in a reasonable and timely manner.”

Distler has many unresolved maintenance requests and said the lack of communication from HRL makes it difficult to gauge how far along the request process is.

According to the housing rates posted on HRL’s website, McLean Hall costs $3,185 per semester for residents, which is the third-most expensive rate for on campus housing at WKU.

As far as financial compensation, Distler is hopeful that some sort of refund or credit will be given for the continual issues.

“I just feel like I have paid way too much and been kind of led to believe that this is supposed to be a nicer dorm,” Distler said.

Distler has plans to move off-campus next year, but remains hopeful that the communication will improve regarding maintenance issues.

News Reporter Kennedy Gayheart can be reached at [email protected]