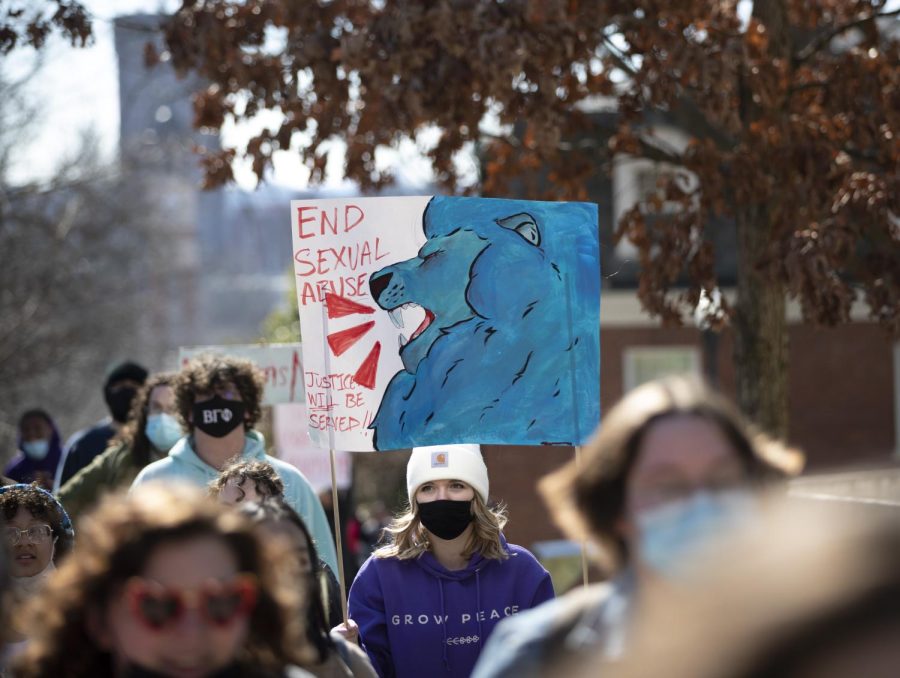 Students taking part in the protest against sexual assault and violence walk up the hill beside Grise Hall on Friday, Feb. 18.

April is Sexual Assault Awareness Month, which creates a space for awareness, prevention and education for sexual assault, harassment and abuse. This year’s theme continues the initiatives from last year, titled “Building Safe Online Spaces Together.”

With this campaign, the month focuses on promoting safety and respect in online communities, intervening when harmful content is produced and practicing digital consent. It is working to reverse the harassment and sexual abuse that have become far too common in online spaces.

There are multiple ways to support SAAM at WKU and in Bowling Green. A variety of resources on and off campus are available to students year-round, including Hope Harbor, a non-profit center that provides services to victims of sexual assault and their families, BRASS, Inc., which offers emergency shelter and support to victims of domestic abuse and the Bowling Green Survivor’s Collective, a support network for victims of assault.

“Our mission is to provide support for survivors of sexual assault and pretty much any form of abuse,” Hannah Hudson, a senior anthropology major who is involved with the Bowling Green Survivor’s Collective, said. “A lot of our purpose is to help normalize conversations to help prevent sex violence and prevent misinformation about sexual violence. We have a lot of information services on social media.”

This organization features a lot of its online community on Instagram, @bgsurvivorscollective, and on Discord, where survivors and allies can connect with resources. There are also specific and confidential spaces for survivors to speak out, as well as minority groups that are often overlooked in the conversation about sexual assault.

1 in 5 women are reported to have experienced attempted or completed rape sometime in their lifetime. It is necessary to support and participate in the goals of SAAM with an understanding of how prevalent sexual violence is and how the movement to end sexual assault, harassment and abuse is nowhere near complete.

According to RAINN, 24.6% of female and 6.8% of male undergraduate students experience rape or sexual assault though physical force or incapacitation. This is why it is so vital that to have resources and understanding of awareness initiatives on a college campus–sexual violence affects more than 30% of college students.

SAAM is a way to find resources, seek out ways to support victims and understand facets of sexual violence that may not be commonly spoken about.