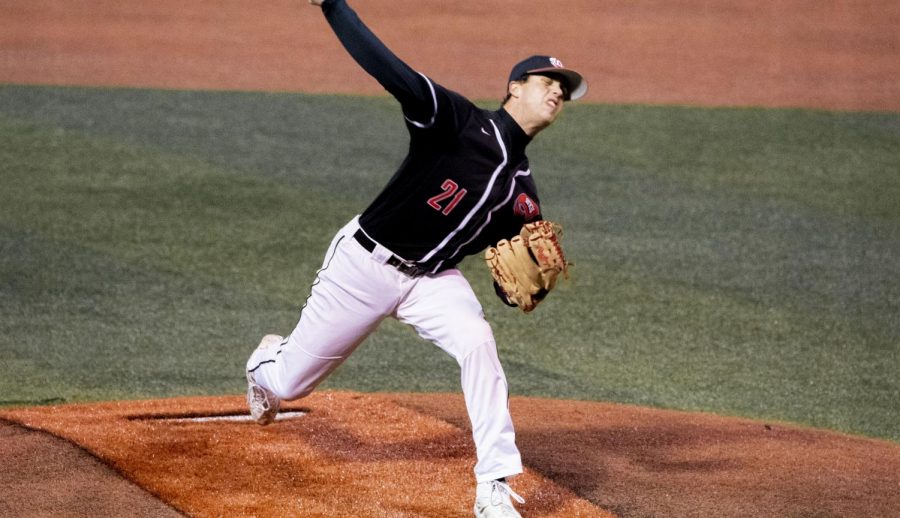 “I thought we played an outstanding game tonight,” head coach John Pawlowski said. “We came up with some timely hits – Davis [Sims] with a big two-run home run and Jackson [Gray] had three hits today. Then you look at the job that Jake [Kates] and Ryan [O’Connell] did – no walks and eight punchouts – they did an outstanding job.”

In his first game back in four games, WKU sophomore Jackson Gray went 3-for-4 for with two RBIs.

Freshman Steven Ondina went 0-for-3 scoring both runs for FIU in the game.

WKU slashed for 10 hits whereas the Panthers had four hits against the Hilltoppers.

“Tomorrow with the doubleheader, it’ll be a challenge moving forward. But, I thought we played with a lot of energy and a lot of life today, so off to a good start here,” Pawlowski said.

Redshirt sophomore Jake Kates got the nod to start the series off for the Hilltoppers on the mound. Kates tossed for seven innings, giving up two hits and one run while picking up seven strikeouts.

After WKU went three up and three down to start the game, freshman Steven Ondina got on base after a hit by pitch by Kates. Ondina went to third base on an error by redshirt freshman Ty Crittenberger. Then Ondina scored the first run of the game on a fielder’s choice.

After both teams had nothing to show in the second inning, rain started to fall, forcing a 15-minute rain delay after redshirt senior Luis Chavez doubled to start the bottom of the third frame. Chavez was left stranded after three straight outs.

In the top of the fifth frame, freshman Orlando Hernandez relieved Fernandez for FIU. Sophomore Matthew Meyer then hit a lead-off double. A couple of batters later, Gray hit an RBI single to extend the WKU lead 3-1.

Sophomore Jackson Swiney doubled to lead off the top of the sixth frame. Swiney extended the WKU lead 4-1 on an error by redshirt junior Seth Cannady. FIU went three up and three down in the bottom of the sixth to end the inning.

In the seventh inning, both teams had nothing to show as each team left a runner stranded in scoring position.

In the top of the eighth frame, WKU exploded for five runs. All of the runs came on errors by FIU to make the score 9-1.

At the start of the bottom of the eighth frame, junior Ryan O’Connell relieved Kates for WKU. FIU then got their first hit since the delay on an RBI from single redshirt senior Derek Cartaya to make the score 9-2.

Redshirt junior Everett Hurst relieved Hernandez in the top of the ninth for FIU. Both teams went three up and three down to end the game and WKU won 9-2.

Kates picked up his second win of the season over the Panthers.

Up next the Hilltoppers will play in a doubleheader against the Panthers Friday at 1 p.m. CT.