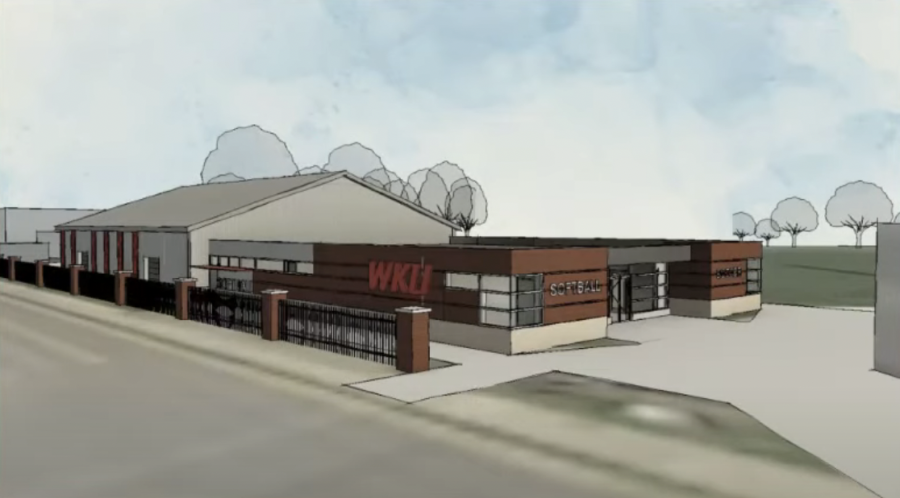 The Board of Regents met for its second committee meeting of the semester Friday morning in the Jody Richards Hall Regents Room, approving another round of faculty raises, filing of the university’s third quarter revenue and expenditures and new facilities for WKU’s softball and soccer programs.
FINANCE & BUDGET COMMITTEE
Susan Howarth, executive vice president for strategy, operations and finance, presented the regents with WKU’s third quarter statement of revenues and expenditures for the nine months ended March 31, 2022 and 2021.

According to the agenda, net tuition revenue is down from the prior year, “though additional funds have been identified to offset the shortfall.” Total revenue is higher due to “increases in state appropriation and Higher Education Emergency Relief Funds received from the American Recovery Act.”

According to the agenda, realized revenue was 89% of budgeted revenue. Expenses made up just 80% of the budgeted total, up from 72% in 2021.

The agenda states that federal and state student financial assistance spent at a higher level, 133% of the budgeted total, due to “direct student payments allocated from the HEERF funds.” According to Howarth’s presentation, most expense categories are trending on target for the fiscal year.

According to Howarth’s presentation, the increase in equipment expenditures is due to “reimbursable COVID-related purchases that assist in remote learning, working, and social distancing in classrooms and labs.”

Actual utilities expenses accounted for 59% of the total budget and actual maintenance expenses came in at 104% of the budget.

The regents accepted the statement for filing, then moved onto personnel items. The regents approved another wave of faculty raises, including a number of major salary increases greater than $5,000 for members of WKU Football’s coaching staff.

WKU Athletic Director Todd Stewart said the raises given to football staff are needed to entice coaches to stay with the program.

“The good part about football is we’re having success, but the reaction to that is coaches leave for other jobs, so we tend to have a lot of turnover,” Stewart said.

Head coach Tyson Helton has managed turnover thus far by hiring “really good, young people” and developing their skills so that they may be promoted from within should someone leave, Stewart said.

“The total spending on salaries does not change, but he’ll promote people from within and their salaries will change — in some cases dramatically, because their responsibilities change dramatically,” Stewart said.

When someone new is brought in to replace promoted personnel, the salary of that vacant position often decreases, Stewart said. This helps offset the cost of promotional raises and keeps total spending roughly the same.
ACADEMIC AFFAIRS COMMITTEE
The Academic Affairs Committee brought forth a motion to establish a supply chain management graduate certificate to operate out of the Gordon Ford College of Business, which would start in the fall of 2022.

According to the agenda, there are 12 course hours required to complete the certificate. Those classes are BA 510: Advanced Organizational Behavior, BA 579: Supply Chain Management, BA 583: Procurement Management and BA 584: Supply Chain Analytics.

The implementation of the certificate will not require additional resources as the required courses are already put in place as part of the WKU MBA supply chain concentration, which was launched in 2020.

The committee’s other motion was to request that James Gary, associate professor of engineering and applied sciences, be given the status of faculty emeritus and Ladonna Hunton, associate vice president for academic budgets and administration, be awarded the status of staff emeritus.

“It becomes a permanent home for soccer and softball on game day, it greatly enhances their current situation,” Stewart said. WKU Soccer’s locker rooms are located in Houchens-Smith Stadium and WKU Softball’s current facilities are in Diddle Arena.

According to the agenda, the cost of this project will be paid by utilizing a combination of WKU Athletics’ share of the exit fee revenue paid by departing league members and funds generated by the Hilltopper Athletic Foundation.

“I appreciate Todd [Stewart] for pointing out that this is a facility that is not a renovation [of our] relatively recent softball facility, but this is new and something that’s necessary,” Caboni said. “In the month that we’re celebrating Title IX, this goes a long way to help address some of the inequities that we see. It’s necessary here on campus that we support our female athletes.”

The regents then approved the awarding of Provost Emeritus status for Cheryl Stevens. Stevens served as the acting provost and vice president for academic affairs from April 2019 until her sabbatical leave on July 1, 2021.

Prior to her role as acting provost, Stevens served as dean of the Ogden College of Science and Engineering from January 2012 until March 2019.
STUDENT AFFAIRS COMMITTEE
Ethan Logan, vice president for enrollment and student experience, presented the regents with updated enrollment data on 2022 first-time freshmen, showing how the university’s numbers stack up against 2021’s totals.

According to the data presented by Logan, 7,047 first-time freshmen were admitted to WKU in 2022, 141 more than in 2021. The number of freshmen in active TOP registration increased by 303 to 1,806 in 2022. The number of completed applications increased by 209 over the previous year.

The number of enrolled Kentucky freshmen fell by 287 from 2021, but the number of freshmen enrolled from border states jumped slightly from 699 to 711.

Logan then provided an update on where the university currently sits compared to its 2022 goal of first-time freshmen enrollment.

The meeting was wrapped up after a performance from the musical “Little Women” by members of the WKU Department of Theatre and Dance.

The regents will meet once more for their second quarterly meeting of the year on May 5.