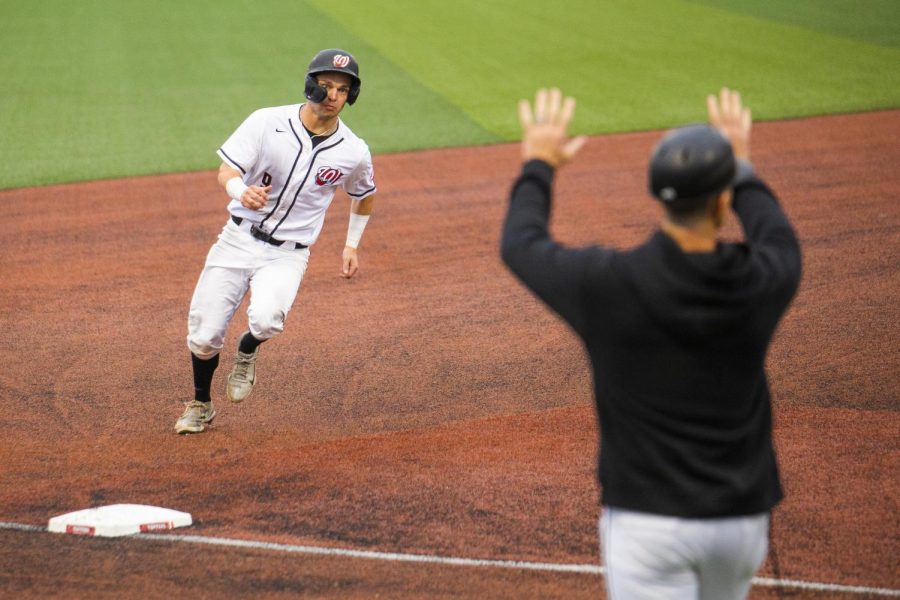 Hilltopper Baseball’s Ty Batusich (9) looks to the Hilltopper’s 3rd base coach for a call during their game against the Belmont Bruins at Nick Denes Field on April 5th.

The Hilltoppers failed to avoid a sweep Saturday as FAU destroyed WKU 9-3.

For the third straight game, the Hilltoppers led early on but failed to contain the Owl’s bats, which exploded all series long. The WKU bats quieted after the first inning as FAU continued to hit throughout the game.

The Hilltoppers now sit at 13-22 on the season and 4-11 in conference play after losing five straight. The squad has been bested in four of five conference series to this point.

Freshman Luke Sinnard got the start for the Hilltoppers and had a tough outing. Sinnard went 2.1 innings and allowed six runs, five of which were earned, on five hits and three walks. Grad student Tyler Burnham got the start for FAU and had a solid outing. Burnham allowed only one unearned run in five innings of work.

The WKU offense was not very productive on the day aside from big two-hit performances from both junior Jackson Gray and freshman Ty Batusich. FAU’s offense dominated as seven different batters recorded hits and four batters homered. Senior Shane Magrann led the Owls offensively with three hits, including a home run.

The Hilltoppers once again got off to a quick start in the top of the first. Batusich doubled, then scored later in the inning on an error to give WKU a 1-0 lead. Sinnard walked two batters in the bottom of the first but kept the Owls off the board.

Burnham kept the Hilltoppers from scoring in the second despite a one-out single. The Owls managed to tie the game 1-1 in the bottom of the second as senior Nicholas Toney followed up a single and a double with a sac fly RBI.

WKU failed to put anyone on base in the top of the third. The FAU bats came to life in the bottom of the third. Sophomore Gabriel Rincones Jr. led off the inning with a solo homer to make it 2-1. Sophomore Dylan Goldstein got in on the action later in the inning, blasting a two-run homer to give FAU a 4-1 lead. The Owls then after a walk recorded three straight hits, pushing in two more to make it 6-1.

Burnham retired WKU in order in the fourth for the second straight inning. The Owls put men on the corners to start the bottom of the fourth before Goldstein grounded into a double play, pushing in a run and making it 7-1.

The Hilltoppers failed to score in the fifth despite a walk. Magrann extended the FAU lead to 8-1 with a solo homer in the bottom of the fifth.

WKU got back in the hit column in the top of the sixth with a single but failed to score in the inning. The Hilltoppers got a much-needed 1-2-3 inning in the bottom of the sixth.

The Hilltoppers loaded the bases with only one out in the top of the seventh, but only managed one run in the inning. Junior Tristin Garcia pushed in the run with an RBI single. Junior Jackson Ross gave the Owls a seven-run lead again in the bottom of the seventh with a two-out solo home run.

Grad student Brian McAuliffe walked in the top of the eighth, but the Hilltoppers could not manage anything else in the inning. The Owls put two men on base in the bottom of the eighth but failed to score.

The Hilltoppers cut the deficit to 9-3 on a sac fly RBI by sophomore Aidan Gilroy in the ninth after several singles. The club failed to further rally in the inning as FAU claimed a 9-3 victory and a series sweep.

Up next, the Hilltoppers will return home to Nick Denes Field, where they will face Lipscomb at 5 p.m. on April 19.