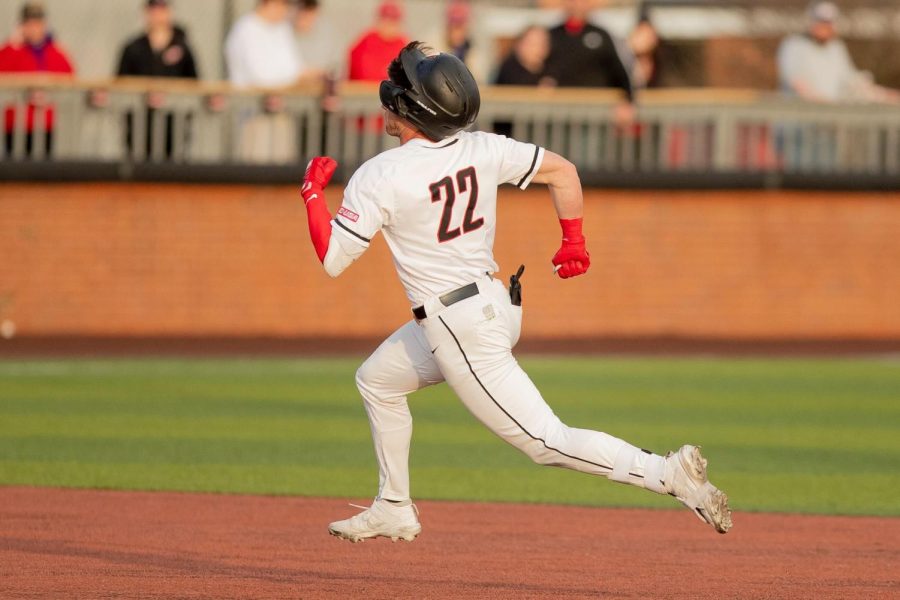 Hilltopper Baseball’s Ty Crittenberger (22) rounds the corner at second base after his hit to make a triple play during their match up with the University of Louisville Cardinals on March 29th at Nick Denes Field.

The Hilltoppers were handed a 2-1 loss by Marshall Friday night at Nick Denes Field.

WKU once again took an early lead Friday but didn’t hold on to it. The Hilltoppers got another good pitching performance to keep them in the game, but the bats failed to capitalize on the opportunity.

The loss for WKU comes in its first matchup with Marshall (17-21-1, 6-10 C-USA) of the year after winning all eight contests against the Thundering Herd last season. The Hilltoppers now sit at 13-24 on the year and 4-12 in conference play. WKU has now lost seven straight and 12 of its last 16.

“We had a couple opportunities early in the game,” WKU head coach John Pawlowski said. “In the first inning and second inning, we got a couple of base runners via a walk and got a couple base hits, we were just looking for a big hit, something to kind of spark us a little bit, just weren’t able to come up with that big hit today.”

“I felt like I did the best I could,” Terbrak said.  “There were just a few pitches that got away from me.”

Junior Tristin Garcia and redshirt sophomore Ty Crittenberger led the way for the Hilltoppers offensively. Both batters recorded two hits on the day for WKU. The Thundering Herd managed to pull out the victory despite only recording five hits on the day. No Marshall batter recorded more than one hit.

The Thundering Herd put two men on base in the top of the second as Terbrak struggled a bit with his control, hitting two batters. Terbrak got out of the frame without a run. Purnell gave up two singles in the bottom of the second before Crittenberger gave the Hilltoppers a 1-0 lead on an RBI single up the middle.

Both pitchers settled in in the third inning as each side went down in order.

Marshall put men on base via Terbrak’s third hit by pitch and a single in the top of the fourth. Terbrak bounced back again to not allow a run. Purnell rolled through the fourth inning, retiring WKU in order.

Terbrak continued to dominate the Thundering Herd in the top of the fifth, recording 1-2-3 inning. The Hilltoppers failed to extend their lead in the bottom of the fifth despite a single by Garcia.

The Thundering Herd took a 2-1 lead in the top of the sixth. Marshall started the inning with a double and a single. Later in the inning, senior Jordon Billups knocked in a run with an RBI double before junior Kyle Schaefer followed with an RBI sac fly. The Hilltoppers got a two-out single in the bottom of the inning but nothing else.

Kates allowed a two-out walk in the top of the eighth but nothing else. Garcia led off the bottom of the eighth with a single, but that was all the Hilltoppers mustered in the frame.

“There’s always positives, but the bottom line is that we are in this position now where these guys want to win, and unfortunately we weren’t able to win tonight,” Pawlowski said. “But sure, there’s always positives you can take from it. Hopefully it’ll give them some confidence moving forward and the things we did do right.”

Up next, the Hilltoppers will face the Thundering Herd again Saturday at noon CT at Nick Denes Field in game two of the three-game series.