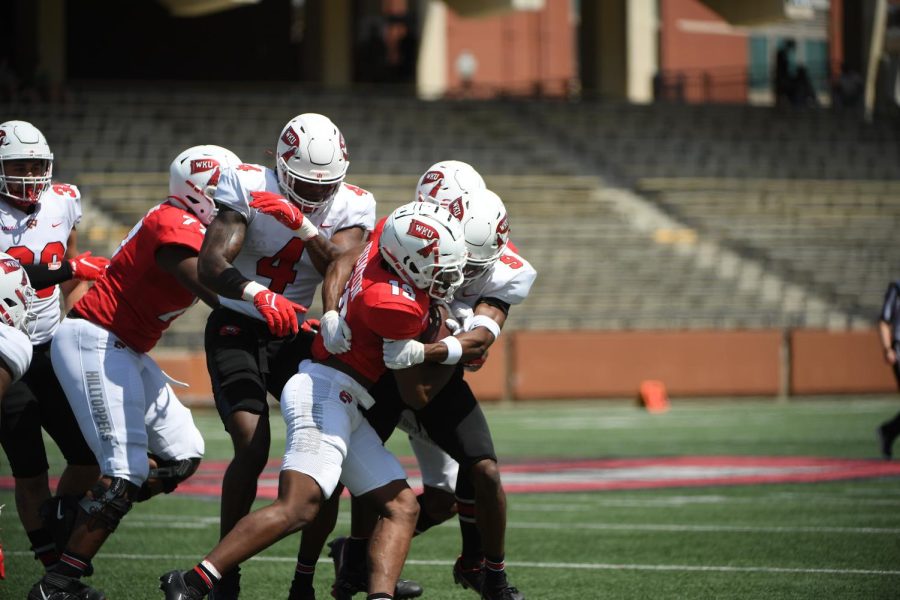 The Hilltoppers played in their annual Red and White spring football game Saturday afternoon. The game consisted of 11 possessions with the offense scoring twice.

“It was a really good spring altogether,” WKU head Coach Tyson Helton said. “Both sides of the ball did a great job today.”
First half
WKU’s Jarret Doege received the first snap at quarterback to start off the scrimmage.

Doege is a transfer to WKU from West Virginia. He passed for 3,048 yards and 19 touchdowns in the 2021 season as a Mountaineer.

“Jarret came in with big shoes to fill with Bailey [Zappe] leaving and everything,” WKU wide receiver Daewood Davis said. “He came in the first day, I hit him up like ‘Hey, let’s get throwing, let’s get running routes.’ He was all with it. He’s a very, very driven player.”

After the first drive didn’t make it past midfield, WKU quarterback Austin Reed started the second possession. He pushed the ball past midfield after a third-and-one with a gain of 18 yards. The next play he completed a 40-yard pass to redshirt freshman tight end River Helms.

“Austin came in, he might not have that same experience that Jarret had, but he has the arm talent,” Davis said. “It’s really going to come down to fall camp, and it’s going to be a real good battle.”

Reed is a recent transfer from West Florida. In the 2019 season as a redshirt freshman, he threw for 4,089 yards, averaging 272.6 yards a game. He was ranked 13th nationally in Division II.

“[I’ve] been really impressed with the quarterback position all spring,” Helton said. “I think all those guys have done a really good job. Jarret had a really good spring. Austin Reed has been really fun to watch, he’s come along. Austin came in right before spring practice.”

The first touchdown of the game was a handoff by Reed to redshirt freshman running back Javy Bunton.

Doege started the third drive of the game. He converted a fourth down on a three-yard completion that he followed up with a 13-yard connection to sophomore running back Kye Robichaux at the end of the first quarter.

Doege picked up the second touchdown of the day on a 20-yard pass to a wide-open Daewwod Davis in the second quarter.

“I just go out here and try to play clear minded,” Davis said. “Go out there and just do my thing. Last year, it was the first year in the offense, I was just trying to be perfect. This year I came out and just went with the flow and just came out here every day and do what I do best, just play football and make plays.”

Redshift freshman quarterback Darius Ocean started the fourth possession. After a quick three-and-out, he came back in for the fifth drive. Ocean threw back-to-back 14 and 19-yard completions to help move the ball into the redzone. Sophomore Kylan Guidry had the first sack of the game to end the fifth drive.

Doege threw a 25-yard pass to Davis to begin his third possession of the first half, bringing the offense past midfield. Another completion from the pair brought their team to the 13-yard line. A carry by Robichaux brought the ball inside the 10-yard line before the defense made a goal line stand.

“[Doege] wants to be great,” Davis said. “He knows the capacity of the offense and what we can do and what we did last year. He came in with a mentality every day, he just came and tried. He wants to prove [to] everybody that he can do what Bailey [Zappe] did or even probably go beyond that and win us a couple of championships.”

At the end of the first half, WKU’s offense scored twice in six possessions. The defense made two stops in the red zone while Doege led the way at quarterback with three starting possessions in the first half.
Second Half
Bowling Green native Caden Veltkamp started the first possession of the second half at quarterback. Redshirt sophomore Dante Walker came up with a big tackle for a loss, pushing them back to a 3rd-and-15, ultimately ending Veltkamp’s first possession.

Veltkamp came back out to start the second possession of the second half. Veltkamp saw three completions in a row for a total gain of 29 yards. Veltkamp then ran for 10 yards.

Akron transfer Michael Mathison got to the 10-yard line after a 27-yard catch and run. The defense made another stop at the goal line to end the third quarter and begin the fourth.

Reed then came back out for his second possession at quarterback, but the drive quickly ended with a three-and-out. Reed was out for his third drive on the next possession and was sacked by Walker to end the drive.

The spring game ended following the next possession.

“I think we’ve just got to keep progressing as a football team over the summer,” Helton said. “There’s a lot of things we need to get better at. We still have to develop our young guys. I like our ones, our twos; we’ve got to keep bringing them along, and they’ve got to help us this year for sure. So that’ll be a major point of emphasis for us in the summer.”

The game concluded the spring football schedule. The 2022 season will begin on Saturday, Aug. 27 when the Hilltoppers host the Austin Peay Governors at Houchens-Smith Stadium.

“The season is all about winning championships,” Helton said. “That’s why you play, [it’s] to try to go win championships. Our guys know that and when we get back in the summer it’ll be time to go to work.”