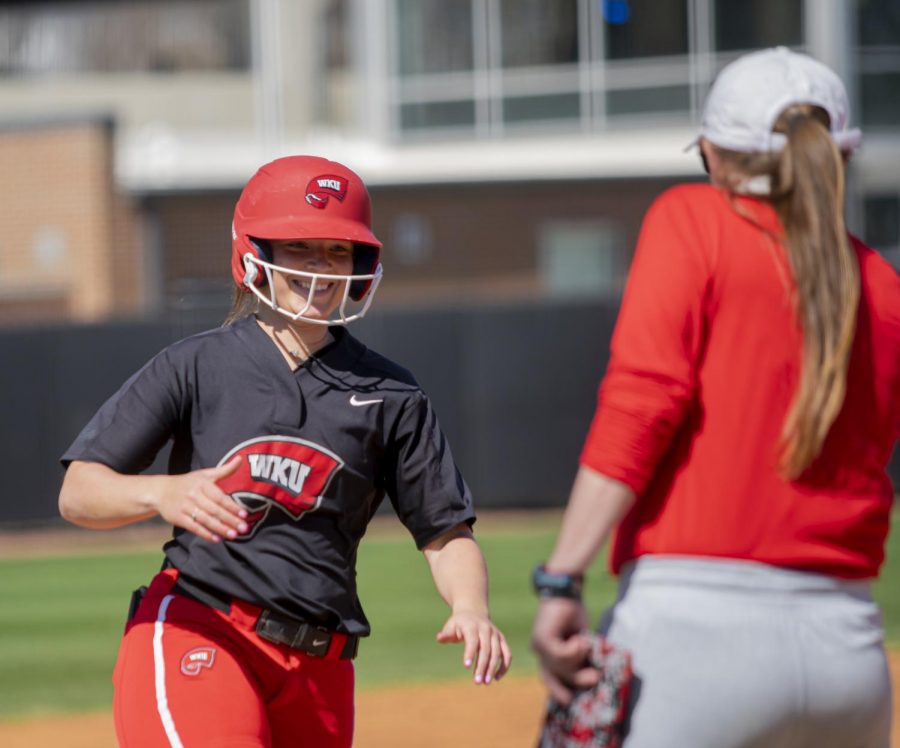 WKU infielder, Taylor Sanders (15) rounding third base after hitting a homerun during a game against UAB Saturday, March 20, 2021.

“Today we came out and made the adjustments necessary, we hit the ball really well and it was a great series win at home,” WKU head coach Amy Tudor said.

WKU junior Taylor Sanders batted in six RBIs on the day, matching a program record while also being the fifth Hilltopper to do so.

“We just wanted to come out here today and show everybody what we can do,” Sanders said.

“It was a big confidence booster and I think all of us really had that mindset of ‘okay we have to play our game,’” Nunn said.

After Nunn’s first pitch, the Herd were unsuccessful in the first inning with zeros across the board. WKU started much better. Junior Brylee Hage singled to lead off before junior Taylor Sanders hit a two-run home run, putting the Hilltoppers up 2-0 after the first inning.

Both programs didn’t get much going in the second inning. Marshall picked up its first hit and WKU went down in order.

Nunn continued her strong performance in the top of the third, giving up a two-out single but no runs. The Hilltoppers brought in a lot of heat. They racked up four runs in the bottom of the third. With two runners in scoring position, senior Taylor Davis scored from third base on a fielder’s choice.

Sanders added two more runs on a two-run RBI double before scoring herself on a sacrifice fly from senior Jordan Ridge. WKU led 6-0 after three innings.

Nunn put up another strong inning on the mound in the fourth. WKU added another four runs in the bottom of the fourth. With two runners in scoring position, Sanders hit a two-run RBI single, her sixth RBI of the day, before scoring again on an error. Fifth-year senior Maddie Bowlds brought in a run on an RBI double to give the Hilltoppers a 10-0 lead going into the fifth frame..

“I think every single one of us went up to the plate with more confidence and believed in ourselves knowing we can do it and that we can beat this team,” Bowlds said.

Lastly to seal the deal, Nunn delivered, putting Marshall’s down in order to give WKU a 10-0 run-rule win.

The Hilltoppers will be back in action in a few days for a midweek matchup with No. 2 Alabama on April 27 at the WKU Softball Complex before heading down to Southern Mississippi for a weekend series from April 29 to May 1.