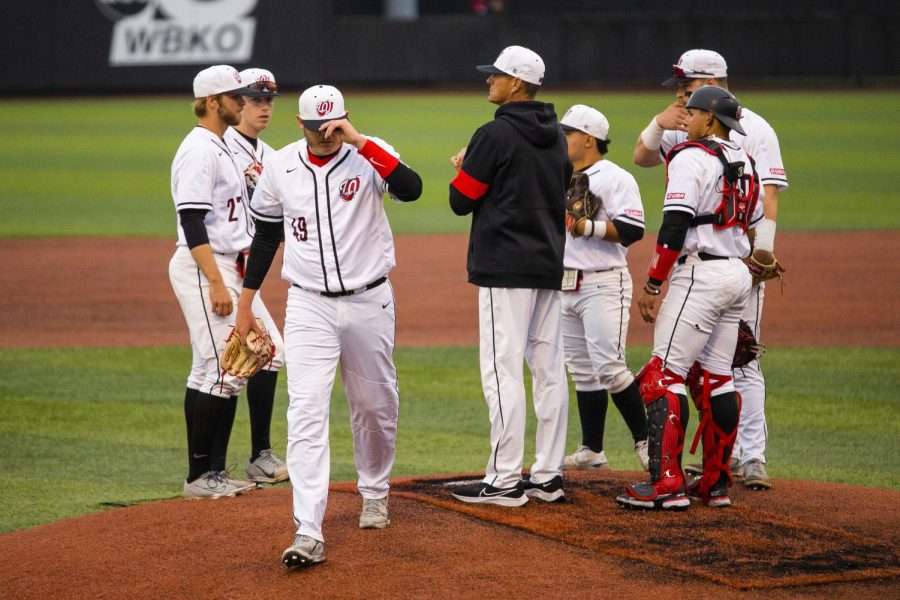 Hilltopper Baseball’s pitcher Aristotle Peter (49) walks off the mound as Aaron Shiflet (12) comes in to relieve him during their game against the Belmont Bruins at Nick Denes Field on April 5th.

The Hilltoppers lost its third Conference USA consecutive series in an 8-2 loss to the Rice Owls Sunday afternoon.

WKU’s offense once again got off to a solid start but cooled down throughout the day as the pitching didn’t keep them in the game. The Hilltoppers failed to take the series over Rice after winning game one of the three-game series, but Rice’s offense proved to be too much for Hilltoppers’ pitching.

WKU senior Sean Bergeron made his second start since returning from injury and put together a solid outing. Bergeron went four innings and allowed two unearned runs on the day. Senior Alex Deleon got the start for Rice and pitched five solid innings. Deleon allowed only one run on two hits.

Junior Tristin Garcia once again carried a Hilltopper offense that could not get much going. Garcia recorded two extra base hits on the day. Senior Hal Hughes helped lead the Owls’ offense on the day, picking up two hits and came around to score twice.

The Hilltoppers got off to a quick start on a Garcia solo homer in the top of the first to make it 1-0. The Owls saw a lead-off hit by pitch come all the way around to score despite no hits. The run scored on a sac fly to tie the game at 1-1.

WKU loaded the bases with two outs in the top of the second but failed to score. Bergeron settled in during the bottom of the second and retired the Owls in order.

DeLeon retired the Hilltoppers in order in the top of the third. The Owls made it a 2-1 game in the bottom of the third on a sac fly RBI by sophomore Guy Garibay Jr. after a double earlier in the inning.

DeLeon flew through the Hilltoppers’ order in the top of the fourth, recording another 1-2-3 inning. Bergeron managed to keep the deficit at one in the bottom of the fourth despite a walk and an error.

The Hilltoppers failed to put a man on base in the top of the fifth for the third straight inning. Garibay followed a one-out single with a two-out RBI double in the bottom of the fifth. Senior Austin Bulman followed with a two-run blast to left, giving Rice a 5-1 lead.

Senior Justin Carlin made it a 5-2 game in the top of the sixth with an RBI single after a double earlier in the inning. Rice’s offense continued to add on in the bottom of the sixth with the Owls tacking on three more runs. Hughes and sophomore Jack Riedel both knocked in a run with an RBI double before Rice made it 8-2 on a passed ball.

Redshirt sophomore Ty Crittenberger singled in the top of the seventh, but the Hilltoppers failed to get anything else going. The Owls were also held to just a single in the bottom of the seventh.

The Hilltoppers went down in order in the top of the eighth before a lighting delay kept the teams off the field for about 30 minutes. When the teams returned, Rice put a man on base with an error but failed to score.

WKU went down in order in the ninth, giving Rice the 8-2 victory.

Up next, the Hilltoppers will be back home at Nick Denes Field. WKU will open a three-game home series against Alabama-Birmingham at 6 p.m. on May 6.