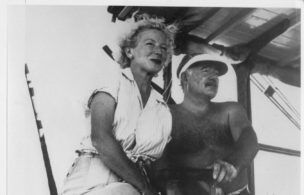 Ernest Hemingway lived and loved as passionately as he wrote, becoming as famous and fabled as his Nobel Prize–winning creations. In six enlightening, often harrowing hours over three nights, Hemingway marks only the second time the prolific Ken Burns has profiled an American author (Mark Twain was the first). He and frequent directing-producing partner Lynn Novick present this towering talent with all of his flaws exposed.

Fellow writers revere and fear Hemingway’s undeniable influence. “He’s so damn popular that you can’t begin to write until you try to kill his ghost in you or embrace it,” says Abraham Verghese (Cutting for Stone). Another admirer, the eloquent Irish author Edna O’Brien, laments his self-aggrandizing public persona: “He lost the best part of himself by trying to impress the audience.” He got noticed early, first as a journalist, before turning his extreme life experiences in World War I and postwar Paris into novels (The Sun Also Rises, A Farewell to Arms) celebrated for their spare, precise prose. Jeff Daniels’ readings of Hemingway’s words are similarly unaffected, reinforcing their power. (Hemingway’s all-star voice cast includes Meryl Streep, Patricia Clarkson, Keri Russell, and Mary-Louise Parker as his four wives.)

With their customary meticulous research and deep compassion, the filmmakers depict a man as disciplined in his craft as he was reckless in his appetites and crippled by insecurity. A heavy drinker, he projected a dashing man’s-man image as he pursued adventure in combat (the Spanish Civil War, a witness to D-Day), often embellishing his exploits. He was fascinated by the brutal spectacle of bullfighting and took pleasure in big-game hunting in Africa and deep-sea fishing between his home bases of Key West and Cuba. Alternately charming and cruel, he went from marriage to marriage in an attempt to fend off loneliness and depression, his mental state made fragile by multiple concussions and brain injury. Hemingway never shirks from the writer’s dark side — considering his ultimate fate, echoing his own father’s suicide, how could it? — but the film also makes a strong and moving case for his enduring masterworks and their insight into human nature.

As O’Brien puts it: “He has immortality and deserves it.”