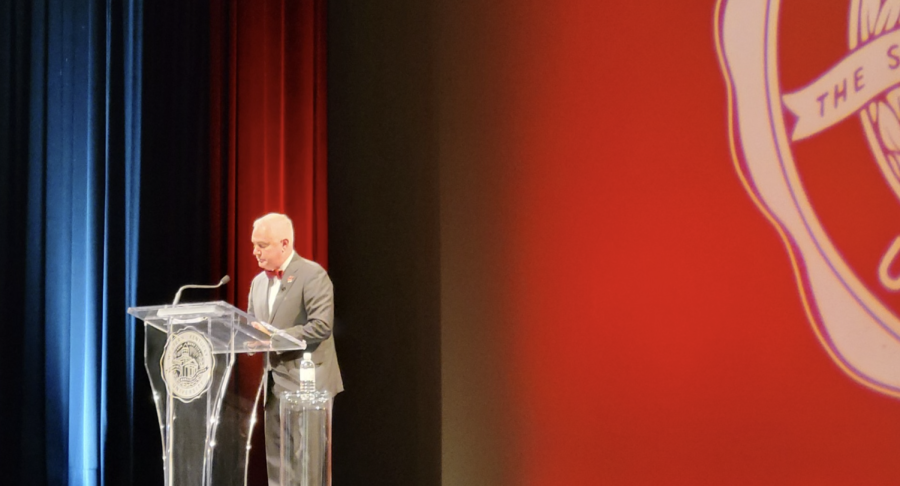 President Timothy Caboni gives his remarks at the 2022 convocation in Van Meter Hall on Monday, Aug. 15.

The annual faculty and staff convocation was held Monday, August 15 at Van Meter Auditorium, with WKU President Timothy Caboni reflecting on recent accomplishments and laying out plans for the upcoming year.

WKU is entering its fifth year of its strategic plan known as “Climbing to Greater Heights,” marking a halfway point within the 10 year initiative. It is this plan that is bringing changes to the university, with improvements on construction, student retention rates and support programs.

“We’ve accomplished much in the face of adversity and many challenges. We overcame, we succeeded and we achieved excellence across the institution,” Caboni said. “But sometimes, with a continual focus on improvement, and with the distraction of our immediate responsibilities, it’s easy to lose sight of our many accomplishments.”

According to Caboni, changes to scholarship programs have given more financial access to a greater number of students and have ensured that 85% of the incoming class has institutional scholarship support. Within the past five years, scholarship support for students has also increased by $18.5 million, a 36% increase.

Caboni also explained increases in retention from semester to semester, with 90.9% of first year students enrolled last fall returning for the spring. Those housed in a Living Learning Community had even higher rates, with 95.2% of those students returning in the spring.

Caboni announced that, this semester, underrepresented minority students make up the largest percentage of both the incoming class and the total student population in the university’s history. This comes alongside the work of the Diversity, Equity and Inclusion team, who are working to provide support systems for these students.

Caboni also spoke on WKU’s fundraising efforts, including the opportunity fund that began in 2017 to aid with basic financial hardships. After announcing a new goal last year of $100 million, the opportunity fund has since raised $70.5 million and created 184 new scholarships.

Caboni shared that in the past five years, WKU has raised $171 million in gifts, more than any other five year period in the university’s history. This completed the most successful fundraising decade ever, totaling almost $303 million in student, faculty and staff support.

As the university enters year five of its 10 year strategic plan, Caboni explained that this halfway point will lead the group to access the current plan and make any shifts necessary to make way for new opportunities.

An ongoing part of this plan has been WKU’s work with undergraduate research and federally sponsored grants, which, according to Caboni, differentiates the university from other schools in the state. He reflected on accomplishments with the XR Research Lab and the transformation of the Center for Research Development that houses new research initiatives and corporate research partnerships.

Caboni also explained the work of the academic colleges and the consistent development of new programs, leading with the new career-driven graduate degrees in cybersecurity and supply chain management from the Gordon Ford College of Business and the large number of incoming education majors in the College of Education and Behavioral Sciences in response to the national teacher shortage.

“I challenge each of you, each of our deans and our department chairs and all of our faculty, to remain nimble and to think creatively about where the world is headed, and what that means for our graduates and how we can meet them there,” Caboni said.

Caboni said a large portion of the 10 year plan is to continually invest in campus spaces to continue the expectations set by the outward beauty of WKU’s campus. Within the first five years, some of these construction projects have already been accomplished, such as the First Year Village, which opened last fall, and the Commons, which opened last spring.

After the removal of Garrett Conference Center, green space is being added at the top of the hill to herald the development of the hilltop oval academic village, which will bring in more pedestrian-friendly and community building spaces. This project is set to be complete by the end of next summer.

Cherry Hall will also be completely renovated in order to remain viable for years to come. The university is also working on plans for a new Gordon Ford College of Business building, set for completion in fall of 2025.

Progress is also being made on the Hilltopper Field House, a multipurpose facility that will ultimately provide space for the Big Red Marching Band, WKU’s forensics program and its esports team.

Dean of Students Martha Sales was announced as the Spirit of WKU award winner. She was selected for her student-centric work and the way she seeks to make every student truly belong at WKU.

“I cannot do it without all of you,” Sales said. “Let’s continue to make the climb together and make a difference in the lives of our students.”

Convocation concluded with Caboni reflecting on the importance of sticking together to maintain a strong academic space for students.

“Higher education is so special,” Caboni said. “University is where we work and learn, but also where we play, entertain and sometimes house […] We must be present for this to work, you can’t do that from home or from a computer. Academic wealth and the pursuit of ideas require others.”

Content editor Alexandria Anderson can be reached at [email protected].