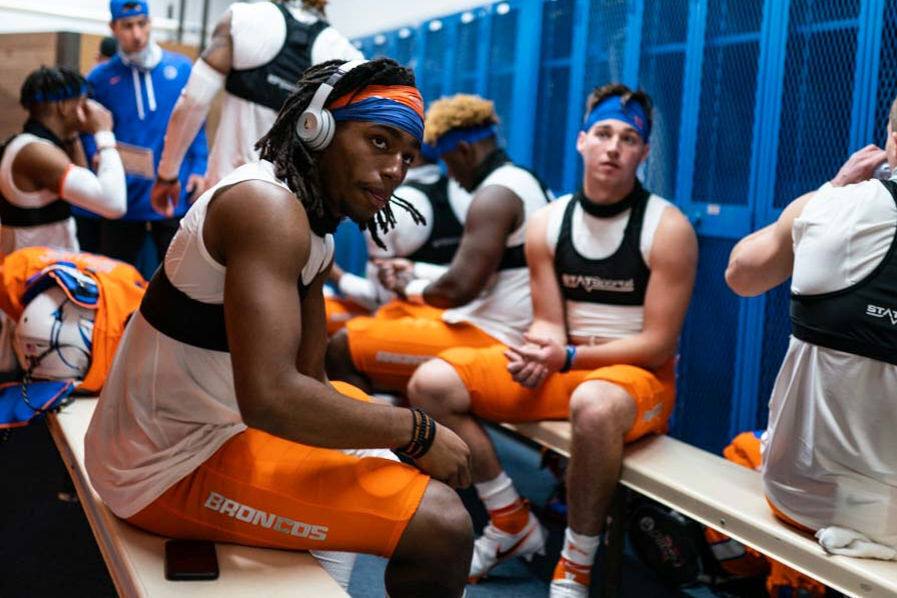 BOISE — Just before the start of each Boise State football practice, the team gathers in a circle near midfield.

It’s a new tradition, started this spring under the direction of first-year coach Andy Avalos, to get the players fired up for practice each day.

A few players go to the center and energize their teammates with loud, passionate words of encouragement before the group does four jumping jacks in unison and breaks to start drills.

Different players take a turn. At the first spring practice captain Riley Whimpey was as animated as ever. Devine Obichere had the group hootin’ and hollerin’ before a practice open to the media last week.

Avalos loves it — he just can’t take credit for it.

The idea, known as the ‘hype circle’, is one of many things new strength coach Reid Kagy has already brought with him in four months on the job.

“You go through a bunch of different experiences everywhere you go and everybody does something a little bit different and it was almost like piecing a few different things together and seeing what fits,” said Kagy, who came to Boise State with Avalos after serving as an assistant strength coach at Oregon.

Kagy, who previously worked at Cincinnati and Iowa State before his two years at Oregon, has made a big impact in a short amount of time since arriving in Boise. He’s brought a new vibe to the weight room with a complete overhaul of how the Broncos train.

He focuses more on position-specific training (power lifting for linemen and more quick burst and speed drills for the wide receivers and defensive backs) and has incorporated new technology such as GPS trackers.

And with every drill or exercise, he and assistants Brandon Pietrzyk and Lucas White are ready with an explanation.

“They have a lot of science to back it and one thing that’s changed with this program is they tell us the why with everything we do,” tight end Riley Smith said. “Even if it’s just running a sprint, they are explaining every little detail as to why we’re doing it, so that helps knowing why we’re doing it and it plays into how it makes us better. They’ve been great and I love working with them.”

While the ‘hype circle’ has maybe been the most noticeable impact to outsiders, Kagy has done plenty behind the scenes as well. The coolest may be the use of GPS trackers, which players wear in vests under their pads at practice.

“It gives us an idea of what a practice looks like,” Kagy said. “We are able to quantify our field work. We’re able to look at yardage, high-speed running, accelerations, decelerations, change of direction. The coolest thing for us is the speeds. The old way of doing it is ‘OK let’s go run a 40’, but now we’re able to tell them how fast they are running in miles-per-hour, so it’s that next step of ‘how do I get better?’

“We have a radar gun too, so not only can we get max velocity and speed and give that information to these guys, but we can tell how well they accelerate, their peak power, and put a diagram together to explain to these guys what they need to work on.”

Kagy has used the GPS trackers at both Oregon and Iowa State previously and knew it was something he wanted to implement when he took over his own program.

The main objective is to provide information and real-time data that shows a player why his workouts and weight-lifting sessions are being designed a certain way.

“It’s a numbers game and we give them the information — here’s where you are and here’s what you need to work on,” Kagy said. “Whatever information we can give these guys and quantify the work that we’re doing and then continue to check back and make sure we’re moving in the right direction, I think it’s awesome for these guys and it gives them the extra buy-in because they are able to see everything we’re doing and if it’s moving in the right direction.”

Kagy also looks the part. He can barely fit into his Boise State polo shirts due to his bulging muscles and said he recently bench pressed close to 450 pounds.

He is also significantly younger than previous strength coach Jeff Pitman — which has helped him connect well with the players.

As for the hype circle? Kagy mentioned Kekaula Kaniho, Scott Matlock, Obichere and Cole Wright as standouts, but like anything else wants to see improvement moving forward.

“It’s definitely gotten a lot better,” Kagy joked. “The guys love it. They feed off it and anybody that jumps in there they put him in a good situation. It’s gotten better practice by practice. Practice one wasn’t perfect, but the last few (before the spring game) have been a lot of fun so we’re going to continue to try and get better at it.”