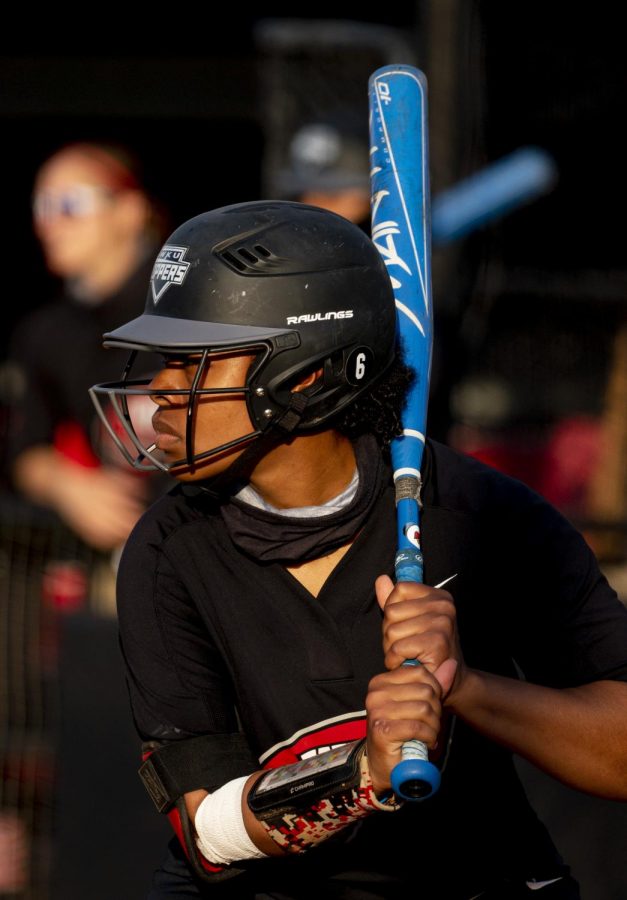 WKU outfielder, Taylor Davis (6) waits for a pitch during the game against Eastern Kentucky on Wednesday, April 7, 2021.

WKU Softballs’ (15-5) five-game winning streak came to an end after a tough 1-0 loss to Eastern Kentucky University (22-9) at home on Wednesday night.

The Hilltoppers had not seen any action since March 24 when they pulled off a 2-1 upset of then-No. 7 Kentucky.

WKU had originally planned on opening Conference USA play with a four-game away series with Marshall but the trip was postponed due to a positive COVID-19 test in the Hilltoppers’ Tier 1 testing group.

“It’s a tough one to lose that way, it happens in the game of softball,” head coach Amy Tudor said after the game. “Obviously we didn’t play well enough to win and EKU did.”

Redshirt senior Kelsey Aikey made her 10th start of the year and crafted a stellar outing, giving up one run and six hits while racking up 13 strikeouts. She’s now 4-5 in the circle this spring.

Aikey set a season high in strikeouts and tied her career best to push her career total to 522, moving her up to fourth all-time in program history.

“I think I’m just in a groove,” Aikey said after the game. “[Catcher] Kendall Smith did awesome tonight behind the plate so I definitely think I feed off her energy… I feel like once I get in the groove I don’t think, whatever gets called I throw it.”

Redshirt sophomore Taylor Davis paced the WKU batters going 2-for-4 against the Colonels.

EKU would threaten to score in the second and third innings by putting runners on second and third base during both occasions, but an infield pop-up and Aikey’s fifth strikeout of the game would put an end to both frames respectively.

WKU’s offense looked a little rusty, as 11 Hilltoppers would end up stranded throughout the contest. WKU would load the bases in the bottom of the sixth, but redshirt senior Paige Carter would pop out and redshirt sophomore Taylor Davis would ground out, putting an end to the frame.

EKU’s redshirt freshman Isabella Gonzalez scored an unearned run in the top of the seventh due to a WKU error to put the only run on the board for both sides and take a 1-0 lead.

The Hilltoppers were unable to muster any offense in the final frame and took their fifth loss of the year.

The Hilltoppers will fly to Florida this weekend to play two games against the No. 5 Florida Gators on April 10-11 as well as an exhibition game against Softball Canada after WKU’s first matchup against the Gators on Saturday at 3 p.m. CT.