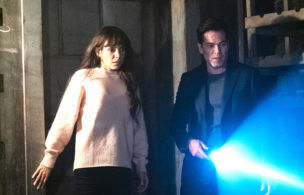 Who do you call when you can’t sell your house? Well, if it’s for a supernatural reason, look no further than the team of eclectic real state specialists of SurrealEstate.

Syfy’s new scripted drama, consisting of 10 episodes, will premiere Summer 2021, and the network has released the first teaser introducing Tim Rozon’s character, Roman, in a way that reminds us so much of him as Doc Holliday on Wynonna Earp. As he arrives at a house with a sign out front indicating it’s for sale, its owner asks “Who are you? Are you a priest?”

“No, ma’am,” Roman corrects her, taking off his hat (and reminding us of Doc). “I’m the real estate guy.”

But he’s the type of real estate guy who’s just as, if not more, useful as a priest if the owner is seeking something exorcism-like. In the season premiere, Roman and his team “handle the cases no one else can: haunted and possessed houses that literally scare would-be buyers away,” Syfy teases. “Researching, investigating and ‘fixing’ the things that go bump in the night, the team works to create closure — and closings — even as they struggle with demons of their own.”

SurrealEstate‘s cast includes Sarah Levy (who was on Schitt’s Creek with Rozon), Adam Korson, Maurice Dean Wint, Savannah Basley (for a Wynonna reunion with Rozon), and Tennille Read. Plus, Wynonna Earp herself Melanie Scrofano will direct two episodes and guest star in one. (She made her directorial debut on her show in its fourth and final season, which is currently airing.)