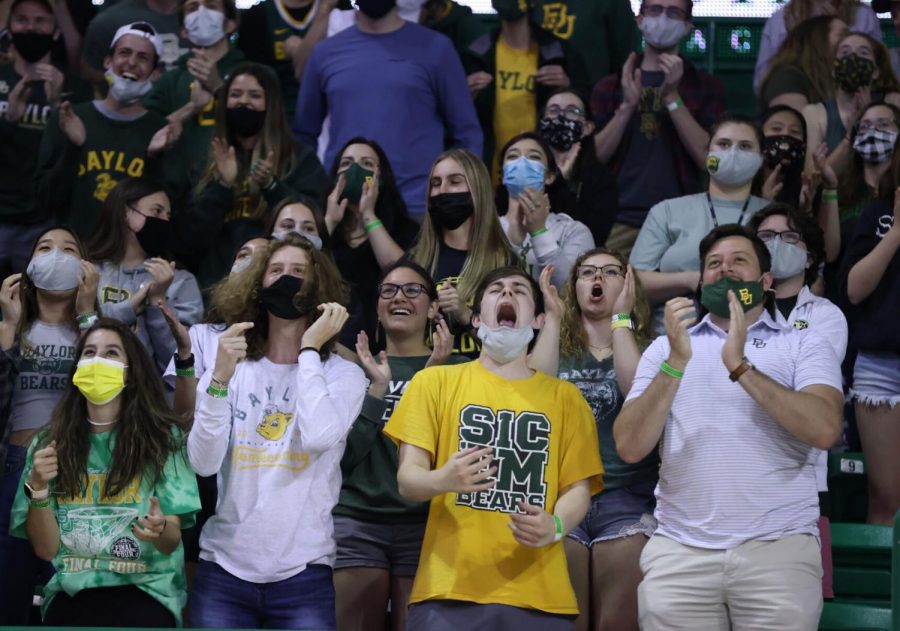 Baylor students react to the Bears against Houston at the watch party at the Ferrell Center Saturday afternoon. For Monday night’s national championship game, the watch party has been moved to McLane Stadium.

Baylor University fans retrieved their sleeping bags and spent the night at old Floyd Casey Stadium back in November 1974, the scoreboard reading Baylor 34, Texas 24, and glowing as a night light. It was the springboard to the Bears’ first Southwest Conference football championship in 50 years.

It remains to be seen if a Baylor win Monday over unbeaten Gonzaga in Indianapolis will have Bears’ basketball fans trekking to the Ferrell Center or McLane Stadium for sleep filled with wondrous dreams.

Baylor captured the public’s fancy marching to its first Final Four appearance in 71 years. It has never won an NCAA national championship in men’s basketball, but gets that chance Monday night at Lucas Oil Stadium, the team’s home away from home throughout the entirety of March Madness that has moved into April. COVID-19 restrictions made pseudo-Hoosiers of every team in the playoff field, with Baylor joining them in the bubble.

The Bears dispatched the Houston Cougars in Saturday’s semifinal game, whipping their former Southwest Conference rivals with a barrage of three-pointers and stifling defense. CBS Sports analyst Clark Kellogg said the Bears returned to their pre-COVID form, apparently having fully recovered from the three-week, pandemic-related pause that dulled their edge.

Charles Barkley, a former National Basketball Association star and now a CBS Sports analyst who never minces words, said he hoped for a Baylor/Gonzaga matchup, saying the two teams had distanced themselves from the pack during the season, and it seemed fitting they meet in the championship.

The game tips at 8:20 p.m. Monday, local time, and will be carried by CBS. Gonzaga opened as a 5-point betting favorite, but that line had slipped to 4.5 points by late Sunday, according to online reports.

Baylor said Sunday fans are invited to watch the game inside McLane Stadium, with athletics department spokesman Will Lattimore saying the school expects about 3,000 people to accept the invitation.

Several hundred fans gathered inside the Ferrell Center on Saturday to catch Baylor and Houston collide, the 78-59 Baylor win particularly satisfying to those who remember the routs administered by Houston’s high-flying Phi Slama Jama in the old Heart O’ Texas Coliseum in the early 1980s.

George’s Restaurant in South Waco, a popular pre- and post-game hangout, was brimming as the sun set over the Bears’ victory.

A roar of conversation and laughter greeted anyone entering George’s, and most of the 24 TV screens were airing the gyrations of Miley Cyrus, who provided entertainment between the Baylor-Houston game and the Gonzaga-UCLA nightcap — the later game a tight one that ended in overtime when Gonzaga’s Jalen Suggs sank a 40-foot shoot as time expired.

“As soon as I walked in, a few minutes before the game, I saw the place was already full and everyone was glued to the TV in all five rooms,” said manager Kevin Lopez. “The crowd was a mix of students and locals. They were hooting and hollering. I can’t wait to do it again Monday.”

Kyle Citrano, managing partners of George’s II on Hewitt Drive, said by phone his family is vacationing in Florida, but will watch the Bears on television.

“The Final Four is huge, and the way the Gonzaga game finished made the buzz even bigger,” said Citrano. “The two best teams in the country are playing each other, as they should have earlier this year. Scott Drew is an incredible individual. We’ve always been a big fan of his, and it’s nice to see him and his team get to play for a national championship.”

Baylor and Gonzaga were scheduled to play during the regular season, but the game became a casualty of the COVID-19 pandemic.

“Yes, again Waco is in the news in a positive way,” she said. “Both the women’s and men’s basketball teams did so well this year, and every announcer mentions Waco in their coverage. We all love a winning team, and sports teams winning brings positive attention to both the school, which can bring more scholars and athletes to the school, and to the town itself.”

The Baylor Bookstore is offering a full line of Final Four-related apparel, and W Promotions, 906 Austin Ave., has put its staff on alert to unveil championship-themed T-shirts possibly as early as Tuesday morning.

Bubba’s 33 Pizza near Valley Mills Drive and the Interstate 35 frontage road will join other sports bars and restaurants in having television sets tuned to the Baylor/Gonzaga game. It also will have Final Four-themed drink specials.