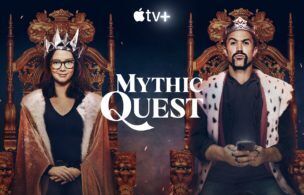 Mythic Quest continues to prove it is one of Apple TV+’s most giving series, as it will unveil a newly announced special episode before the Season 2 premiere next May.

Beginning Friday, April 16, subscribers can stream a standalone episode of the workplace comedy entitled, “Everlight.”  Like many professionals, the creative team behind the Mythic Quest game are heading back to work following shut-downs and this half-hour special is highlighting that. See Also‘Mythic Quest’s Ian & Poppy Clash Over How to Make Another Hit Game in Season 2 First Look (VIDEO)
The team is back in the office after quarantine, still arguing like batty siblings.

“‘Everlight’ is a special episode that addresses the practical and emotional difficulties of returning to normalcy,” said series co-creator Rob McElhenney in a statement to the press. “It’s full of hope and joy and optimism for a bright future. Ahead of our upcoming second season, we felt it was the perfect way (and the perfect time) to invite the audience back into the world of Mythic Quest.”

“Everlight” sees the team behind the multiplayer game reconvene at the office for their annual Everlight party, a LARP (Live Action Role-Play) tournament that Poppy (Charlotte Nicdao) and Ian (McElhenney) are rigging in an underdog’s favor. Along with the return of Mythic Quest‘s ensemble cast, the special will feature guest star Sir Anthony Hopkins, who is lending his voice for the installment.

In a letter to the press, McElhenney also revealed that when Season 2 picks up, most COVID-related references will be minimal as the action takes place in a mostly-recovered world.

This is the second special episode following last spring’s “Quarantine,” which saw the team adjust to work-from-home life. McElhenney will direct the installment written by Ashly Burch, who plays game tester Rachel in the series.