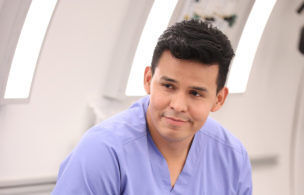 He made a brief appearance on Grey’s Anatomy earlier this season as intern Jimmy Chee. Now, Robert I. Mesa has become a recurring cast member of the long-running show. The news, first reported by Variety, has been confirmed by the show.

And with it, he’s creating a little piece of history. See AlsoWhat Chyler Leigh Has Been Up to Since Leaving ‘Grey’s Anatomy’
Catch up with the star before she returns to the ABC drama on April 1.

Mesa is the show’s first indigenous doctor on the medical drama in its 17 season run. His next appearance will be in the April 15 episode, after which he’ll make regular appearances. Chee was first introduced to the show in the third episode of the current season, back in November, when he was part of a group of interns at Grey Sloan Memorial Hospital.

Mesa is a Navajo/Soboba actor. His previous credits include the Netflix horror series From Dusk Till Dawn,  the Leonardo DiCaprio-produced History Channel miniseries The Men Who Built America: Frontiersmen, and in N. Scott Momaday: Words from a Bear on PBS’s American Masters series. He is also a visual artist, photographer. and writer.