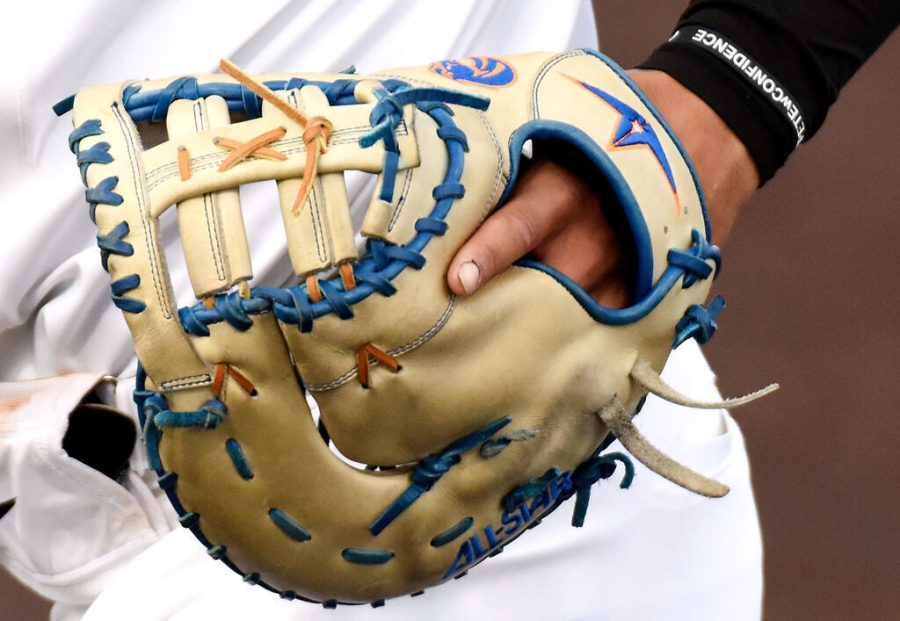 Missouri sophomore Torin Montgomery is seen wearing his glove embroidered with the Boise State logo as he runs back into the dugout Feb. 27 at Taylor Stadium.

A baseball jersey hangs alone on the wall in Torin Montgomery’s bedroom. It’s not from his high school or travel ball days, it’s not a replica of one of his favorite MLB teams and it doesn’t read “Mizzou” across the front, though Montgomery now plays as a first baseman at Missouri.

The jersey belongs to a team that doesn’t exist anymore. Montgomery used to wear it when he played for Boise State.

“I’m going to bring it everywhere I go,” he says of it.

In 2017, the Boise State athletic department announced it would be restarting its baseball program following a nearly 40-year stint without the sport. The Broncos quickly hired Gary Van Tol, a baseball guru in the Northwest who talked about wanting to create a team culture that was unique to Boise State; a mantra that was geared toward future success and a close-knit atmosphere.

That recruiting pitch was enough to draw Montgomery — then a senior at Lake Washington High School in Kirkland, Washington — away from the Miami Marlins, who selected him a 35th-round of the MLB Draft. Montgomery had some doubts about the Boise State program, which hadn’t played a game since 1980, but on his first visit, he fell in love with the Broncos program and the city of Boise.

“It was going to be our team,” he said. “We create the culture. We were just going to run the Mountain West. That was the plan.”

In 2020, when Boise State baseball played its first games in four decades, the team got off to the exact start it wanted. The Broncos opened the season with a televised series against No. 22 Texas on the road. They lost all three games, but gave the baseball blue-blood a scare in the second and third games, the latter of which took 10 innings.

Boise was buzzing when the team returned for its first home series against Northern Colorado. Plans for a new stadium had been delayed, so more than 3,000 fans braved the February cold to pack into the stands of nearby Memorial Stadium, home of the independent Boise Hawks.

Boise State swept that first home series and went on to go 9-5 before the COVID-19 pandemic cut short the NCAA baseball season March 12, 2020. Van Tol sent all his players home, telling them to focus on their academics and getting a place on a team in a summer league, thinking that the Broncos would return in 2021 better than before.

Little did the players and coaches know that was the last time they would be together as a team.

Van Tol and other coaches were furloughed, but they continued to recruit for 2021. They had the last prospect drive up July 1 from Arkansas for rehab on an arm injury. The next day, the recruit woke up to find out Boise State no longer had a baseball program.

The move, made by the university because of revenue lost during the shutdown, took everyone by surprise. The Broncos didn’t even get to take a team photo. They’d been waiting for the grass to turn green.

Montgomery spent the summer staying with a few Broncos teammates at a Ramada Inn in Bismarck, North Dakota, playing in a pod of three baseball teams. A roommate awoke him with the news.

“(My roommate) was like, ‘Am I dreaming right now? I think I’m still dreaming,’” Montgomery said.

The two opened an email to find that the Boise State athletic department had removed both the baseball and women’s swimming and diving teams. Montgomery said the finality of the decision took months to set in.

In a statement following the cuts, Boise State president Marlene Tromp called them the result of an “in-depth analysis of the athletics department’s budgets and programs by several senior leaders.”

“The pandemic has made a challenging financial situation unsustainable,” Tromp said in the statement. “Ultimately, the reduction of the number of sports in which we compete allows Boise State a better chance of remaining competitive at the highest level and provides a more realistic roadmap to a sustainable future for the university and athletic department.”

Folks in Boise tried to do the same thing. A GoFundMe effort to save the team garnered nearly $70,000 in donations, and private pledges reportedly brought the figure close to $1 million.

The players and community had hope that the program would be reinstated, but Van Tol knew better. This time Boise baseball was gone for good, and with just a month left in the summer, there were not a lot of options for the former Broncos.

The next few weeks were a whirlwind for Van Tol and his now-former players.

“I just remember besides the summer ball games I was playing, it was all day I was on the phone,” Montgomery said. “Whether it was coaches, recruiting coordinators, my mom, my old coaches, we were just constantly talking. It was overwhelming, really, and the whole time I was just like, ‘I don’t even want to leave Boise State.’ I’m getting all these calls from different schools and I have to decide to go to one.”

Van Tol’s phones also were ringing off the hook. He said the process was “bedlam,” but that at the end of the day, it was about finding opportunities for his players and doing everything he could to find them a new place to play.

“I mean, it was a special group,” he said. “I think it’ll be a group of guys that will go down in the archives at Boise State University as the last baseball team and, you know, we didn’t have a lot of resources and a lot of bling or bells and whistles, but we had some guys that were fired up to be Broncos. And that’s why it was so difficult for them to leave.”

Montgomery fielded calls from all over the country, but took his time in finding a new home. He started each of the 13 games he played during his redshirt freshman season and was named to the All-Mountain West team after batting .308 with three home runs. D1Baseball.com rated Montgomery No. 33 among freshman hitters. Most of his teammates stayed in the western U.S., but Montgomery narrowed his sights on Missouri and Connecticut, where his family is from.

Team culture was on the forefront of Montgomery’s mind; his family and his hitting coach at Boise State advised him to go with his instinct. Montgomery struggled with the balance of rushing such a huge decision and having enough time to commit to a new school, but one day, he said, he “just woke up and had a feeling.”

Van Tol was impressed with Missouri’s patience and understanding through the process.

“I tip my hat to the Missouri staff, because they didn’t give (Montgomery) a deadline or timeline,” he said. “I think they respected the mourning period that he was going through, and that’s why he felt Missouri was such the right fit for him.”

Montgomery grew up in the Seattle area, and Columbia is the furthest he’s lived from his family. He misses his teammates at Boise State but said the guys on Missouri have been nice to rely on.

“You kind of create your own family here,” he said. “… Getting those new relationships is what’s going to carry you throughout your career. At the end of the day in pro ball, I can switch teams just as quickly as I had to from Boise State to Missouri. You just have to find people you trust and build those great friendships. These are people you remember forever.”

Van Tol offered similar sentiments to the Boise State team following the news of the program getting cut.

“I’ve told every one of them, ‘Hey, I’m here for you if you need anything, but you don’t need me in your way anymore. You need to go and take care of this next chapter in your life, and I don’t want to be a distraction.’ So I’ve just really kind of taken a backseat because they’re all at different places, different programs, different coaches. I’ve talked to a few more than others, and I’ve just kind of left them in their own space to move forward, knowing that they always have this connection and relationship that will always be there.”

Von Tol is confident Montgomery is where he belongs, and his former player agrees. Montgomery is excited to face the best competition in college baseball in the Southeastern Conference. Van Tol said Montgomery is going to be successful on or off the field because of the person he is.

“For me, having the opportunity to work with guys like that is why I do what I do,” he said.

Sadness still lingers for both men because of what could have been at Boise State, but Montgomery says that the relationships formed in Idaho still hold the team together.

“We’re always going to be Broncos at the end of the day,” he said.

Montgomery hopes he can see his Boise State teammates on the diamond down the road in college or professionally, and he is looking forward to playing with pitcher Hunter Omlid in the Cape Cod league this summer. He and Van Tol both think that a team reunion is in order in the future.

Maybe at that reunion, the Boise State baseball team can take its team photo.