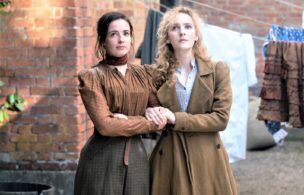 HBO’s gearing up to take viewers on a twisty new sci-fi adventure in its forthcoming series The Nevers.

In anticipation of the season’s Part 1 debut, HBO has unveiled a new trailer and some fresh key art to tease the action that lies ahead. The drama arrives Sunday, April 11, and will run for six episodes before returning for Part 2’s six episodes stint at a later date. See AlsoJoss Whedon’s ‘The Nevers’: Teaser Reveals the ‘Power that Mocks God’ (VIDEO)
Meet the ‘Touched,’ the powerful British women with abnormal abilities who live in the last years of Queen Victoria’s reign.

The Nevers is set against the backdrop of Victorian London in August of 1896. During that time, a supernatural event rocks the city and leaves certain individuals bestowed with special abilities ranging from “wondrous to disturbing.” Their abilities referred to as “turns,” these gifted humans are pushed into a new underclass filled with danger.

When it becomes clear this new class needs protection, widow Amalia True (Outlander‘s Laura Donnelly) and young inventor Penance Adair (Vikings‘ Ann Skelly) take it upon themselves. In order to be successful, they’ll have to root out any possible threats that seem to abound in the trailer, below. Executive produced by Joss Whedon, Bernadette Caulfield, Ilene S. Landress, Doug Petrie, Jane Espenson, and Philippa Goslett, The Nevers sets up a thrilling story worth digging into. Catch the trailer below, and stay tuned for the show’s arrival next month.