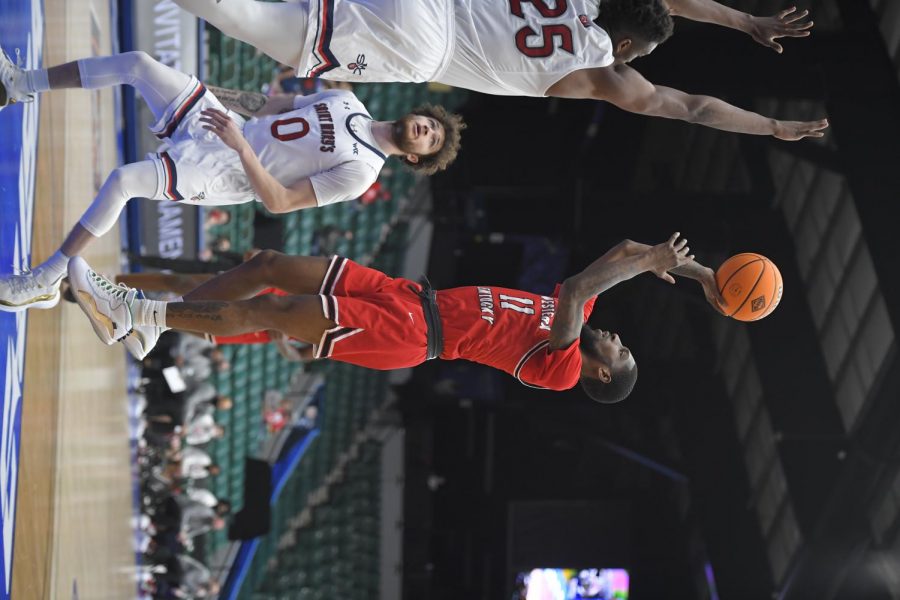 Senior Taveion Hollingsworth (11) attempting a jumper against Saint Mary's on March 17, 2021. WKU went on to win 69-67 and advanced to the quarterfinals of the NIT.

After a heartbreaking loss in the Conference USA championship, the WKU Hilltoppers had every excuse in the world to lose in the opening round of the National Invitational Tournament, but they pulled out a victory against a Saint Mary’s team that finished second in the West Coast Conference.

“There’s three games left, take them one at a time. By the time we play again, there probably won’t be no more than 25 or 30 left in the country left playing, and we’re going to be one of those teams,” head coach Rick Stansbury said. “We’re still competing for a national championship. There’s a lot of players, a lot of coaches who would still like to be in this situation, and everyone you play now takes on a lot more meaning.”

The Hilltoppers held the lead for most of the game, but the Gaels were able to tie it up. Saint Mary’s turned the ball over with nine seconds left before senior Taveion Hollingsworth drew a foul and was sent to the free-throw line, hitting both, ultimately taking the win.

“We got the first one out of the way, now you can’t make excuses for the next one. If anything, we would’ve lost this one,” Hollingsworth said. “I’m glad the guys got over the pain and hurt that we were all feeling last weekend. I’m pretty happy for the guys who get to see how we will make a run in this.”

WKU will now take on a familiar foe, conference-rival Louisiana Tech. The Hilltoppers and Bulldogs split the regular season series that took place in Diddle Arena, with WKU winning the first game 66-64 and La Tech winning the second game 63-58. In both games, the Hilltoppers held the Bulldogs under its season average of 73 points per game.

The freshman finished with 22 points and seven rebounds in their first round matchup against the Rebels.

By game day, WKU will have had over a week of rest. The last time the Hilltoppers had more than a week of rest, they handily defeated Rice, surpassing their points per game average.

“We’re still competing for a national championship. Most teams still aren’t playing,” Hollingsworth said. “And obviously we’re blessed to be in this situation right now but we’re just going to make the most of it; we’re going to try to win these games.”

WKU will still be without the services of Carson Williams as he is preparing to participate in an NFL pro-day, pursuing a career in professional football. Senior Kenny Cooper is still questionable to be back after he missed the first round game against Saint Mary’s with an ankle injury.

The rubber match between WKU and La Tech will take place Thursday evening at 9 p.m. in Frisco, Texas. The game will be broadcasted on ESPN2.