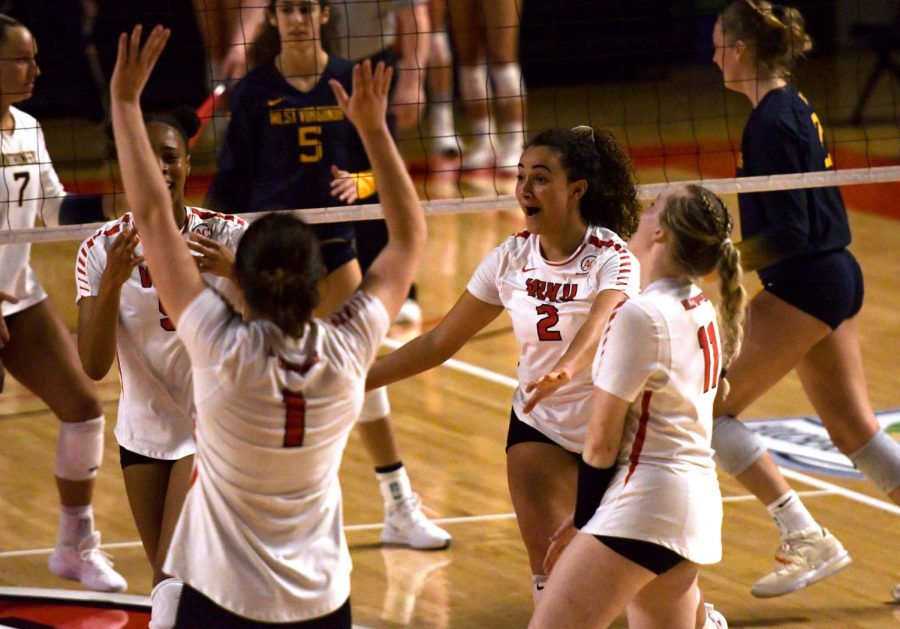 The WKU volleyball team celebrates as they extend their lead over West Virginia during the fourth set during the game in Diddle Arena on Mar. 12, 2021. WKU won 3-1.

WKU (14-0) hosted West Virginia (8-9) Friday night for the final non-conference match of the spring season. The Lady Toppers won 3-1 after falling to the Mountaineers in the first set and coming back claiming three sets in a row.

The programs last met in 1994 with the Mountaineers taking the match 3-1.

“It was so nice to play in a match that wasn’t at noon on a Monday when it’s hard for people to get in there,” head coach Travis Hudson said. “We were finally able to put a Friday night evening match in there and wow did our fan base turn out.”

Hudson said he looks forward to next fall when more fans can come into Diddle Arena and cheer on the Lady Topper Volleyball program.

“This match will benefit us so greatly come conference tournament time,” Hudson said. “We were in a high-intensity high-level match. We’ve really separated from a lot of the teams we’ve played so far in the league.”

West Virginia was first to get a point Friday, after an attempted kill by senior Kayland Jackson was hit out of bounds. WKU’s first point of the match followed, after a kill from sophomore Avri Davis.

Junior Kristin Lux claimed the first ace of the game for the Mountaineers over the Lady Toppers.

Davis came up with her second kill of the set after her substitution back in, letting the teams see another tie, 9-9.

A block by duo Davis and Dieudonne put the Lady Toppers up for the second time in the set. After the block, WKU saw its first ace of the match by junior defensive specialist Ashley Hood. A West Virginia timeout was called after a 5-0 WKU scoring run, which pushed the team’s lead up to four points.

After a West Virginia kill and block put the team up by three points, WKU called its second timeout of the set. Following the timeout, the Lady Toppers hit three kills, one of which, by Matthews, tied the set at 22.

A West Virginia kill led to set point, following a retaliating kill by Dieudonne. The Mountaineers claimed the first set 26-23 after a WKU service error from freshman Cameron Mosley.

This was the third set WKU has lost this season.

Similar to the first set, the Mountaineers were the first to get up on the scoreboard after a ball from Isenbarger was unable to get over the net. A kill by Jackson followed, then allowing the Lady Toppers to get their first point of the set.

After a competitive volley, Briggs hit a kill, which led to a 5-3 WKU lead, early on in the set.

A 3-0 West Virginia scoring run, which included two kills by Lux, was cut short by a kill by Briggs, preventing a tie. That play was followed by West Virginia’s first ace of the set by Lux.

Three plays later, the Lady Toppers saw their first ace of set two after Briggs hit one and led to a WKU tie 9-9. WKU’s last play in its 4-0 scoring run was a big block by Jackson and Isenbarger, finishing off the run with a two point lead.

Another WKU 3-0 run, including a Mountaineer service error and kills by Matthews and Jackson, both assisted by Dieudonne, led to a West Virginia timeout. At the time of this timeout, WKU was up 14-10, the largest lead the team had seen in set two.

WKU’s lead was cut down to two points after a failed block from Matthews, leading to a West Virginia point. Dieudonne then hit her second kill of the match, bringing WKU’s lead up to three points, 16-13.

A big block by Jackson and Isenbarger broke an 18-18 tie, which was followed by a West Virginia attack error by Lux, leading to a Mountaineer timeout and a WKU lead of two heading towards the end of the set.

A kill by Matthews led to set point while WKU was in the lead with three points. The Mountaineers then garnered two quick points, leading set point to be in played three times. Following a WKU timeout, Matthews came out with another kill, bringing in WKU’s first set of the match 25-23.

Matthews said playing matches with teams outside of C-USA is exciting.

“The opponents in the Big 12 are a lot bigger than in Conference USA so it gives us a different viewpoint and they can expose us to what we need to work on,” Matthews said Friday in a post-game Zoom. “And they did that. Also preparing us for the tournament.”

For the third time in a row within Friday’s match, West Virginia was first to see a point on the scoreboard following a kill by Lux. Also identical to the previous two sets, WKU’s first point immediately followed, after a kill by Isenbarger. The Mountaineers saw their first ace of the set early on from Lux, pushing up to a 3-2 lead.

A big no-contact kill by Briggs with an assist from Dieudonne led to a 6-6 tie. Ties were a familiar look on the scoreboard in the third set, with the two teams seeing 11 ties throughout set three.

WKU was the first to get up more than one point within the set, after a 3-0 scoring run including two kills by Briggs led to a three point lead for the Lady Toppers.

This run resulted in a West Virginia timeout, the first of the set. The run increased to 5-0 after the Mountaineers committed two attack errors. The run, which put the Lady Toppers up five points, was cut short when the team’s ball was blocked by the Mountaineers.

That block was the beginning of a four-point run that West Virginia fired back with. This was followed by a WKU timeout, the first of the set. The run was then stopped by a kill courtesy of Briggs

WKU saw a three-point lead after a kill from Isenbarger put the team up 19-16, and again saw a four-point lead following a kill by Davis. Both of these points were assisted by Dieudonne.

The largest lead in the set so far came after a West Virginia attack error committed by Lux. This error put WKU up 22-17, a lead of five points. This new Lady Topper lead led to the Mountaineers calling their first timeout of the set.

Two back-to-back blocks by Matthews were concluded by set point. The Mountaineers didn’t end the set without a fight as they kept the set alive with two consecutive kills.

Davis ended the third set with a kill to claim the second set in a row to take a 2-1 lead over the Mountaineers.

“That was a pretty pivotal third set,” Hudson said. “When we got that one I put it in our player’s hands. We were able to separate early in that set. Ashley Hood went on a serving run and Lauren Matthews just took over blocking and it really gave us some separation.”

Differentiating itself from the previous three sets, WKU was the first to see a point after a West Virginia service error. West Virginia then saw its first point of the set after a kill by junior setter Lacey Zerwas, a play that was followed by the first ace of the set by Zerwas.

Matthews came back with four blocks one after the other to push WKU up to a two-point lead 5-3. These blocks were followed by a West Virginia timeout.

“They were important because in the beginning the first few sets I believe I had zero to two blocks, and I’m usually trying to get at least like four blocks a game, and I was pretty behind,” Matthews said. “The middles were hurting us, and so I knew I needed to step up and make those adjustments.”

A kill by West Virginia’s Lux ended the run, but WKU didn’t let up, responding back with kills by Matthews and Briggs respectively.

A tipped ball over the net by Isenbarger led the Lady Toppers to a 15-12 lead. This point was continued by a block by Matthews, and then a West Virginia timeout was called. The timeout was followed by two attack errors, allowing two points to WKU, letting the team see a six-point lead, 18-12.

The teams played in set point for the duration of four plays, beginning with a West Virginia service error and ending with a kill by Isenbarger with an assist from Dieudonne. This was Isenberger’s seventh kill of the match and Dieudonne’s 49th assist of the match. WKU grabbed three sets in a row, getting a set win in set four with a 25-19 lead.

“We always just try to focus the best we can on our side of the net, because if we can control the small ball plays like picking up tips and just doing exactly what we’re all supposed to do every single play then we know that we can just come back,” senior Hallie Shelton said. “We’re a team that really plays set-to-set so that first set didn’t go very well, obviously, and we just flushed it and made the adjustments we needed to do.”

Up next WKU will begin its four game road trip to round out the 2021 spring slate. First, the Lady Toppers will travel to Murfreesboro, Tennessee for a series with Middle Tennessee on March 20-21.

To conclude the regular season WKU will make its way up to Norfolk, Virginia on March 26-27 for the first matches in program history against Old Dominion.