‘Men in Kilts’: Sam & Graham Bike the Highlands, and Graham Fights Off His Fear of Heights (RECAP) 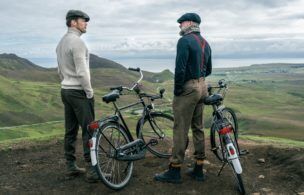 ‘Men in Kilts’: Sam & Graham Bike the Highlands, and Graham Fights Off His Fear of Heights (RECAP)

[Warning: The below contains MAJOR spoilers for Season 1, Episode 6 of Men in Kilts: A Roadtrip with Sam and Graham, “Scotland by Land, Air, and Sea.”]

Sam Heughan and Graham McTavish take their Scottish adventure to new heights, literally, in Episode 6 of Men in Kilts.

In Season 1’s “Scotland by Land, Air, and Sea,” the men explore their homeland from various points of view. First, after struggling with bikes along hilly terrain, they take time to look out over the beautiful Scotland plains. See Also‘Men in Kilts’: Sam & Graham Wrangle Sheep and Fight Off Midges (RECAP)
Plus, in ‘Culture and Tradition,’ they try to learn Gaelic, weave baskets, and more stuff they’re not very good at.

While discussing the popularity of the Scottish highlands, they also mention that the islands and low lands of Scotland have both been big drawers for travelers as well. So they head to Loch Ness via camper van, where Sam is terrorized by midges around The Minch, a strait that’s on the way to the lake.

Recalling a tale from his youth, Sam shares the legend that the islands of Scotland were formed when a giant “hag” dropped stones in the sea, forming the spots he and the rest of the world have come to know and live on. And while on the subject of mythical happenings, they theorize about the Loch Ness monster. Once there, they’re met by former Outlander costar Gary Lewis, who played Colum MacKenzie, brother to McTavish’s Dougal and uncle to Heughan’s Jamie. Together, the trio takes a row boat out for a spin on the famous body of water and have a mini family reunion of sorts. Continuing to admire the unkempt beauty of Scotland, Sam and Graham then boat out to the Isle of Skye and drive to Quiraing, where they get back on bikes to see the Old Man of Storr, a hill structure that’s been the filming site for various films including Transformers and Aliens. While there, the duo explores the Fairy Pools on the island and even go for a chilly dip in the cool waters.

Next on the itinerary is a sea plane flight over the Ben Lomond “munro” (Scottish for mountain). When they land at the fittingly titled Kilt Rock, Sam and Graham prepare for their most daunting activity yet — repelling down the cliff face. The only problem? While Graham was OK in the highlands, he has a serious fear of heights. But with the help of abseiling instructor Matt Barratt, Sam convinces Graham to conquer his serious fear. And he does, kind of! Graham harnesses up and with Sam coaxing and kidding, he harnesses up and makes a brief rappel down Kilt Rock — to much applause from the crew. Of course, when it’s his turn, daredevil Sam barely bats an eye.

It’s pretty much a successful conclusion to their land, air, and sea adventures. We can’t wait to see what’s next.

Men in Kilts: A Roadtrip with Sam and Graham, Sundays, 9/8c, Starz