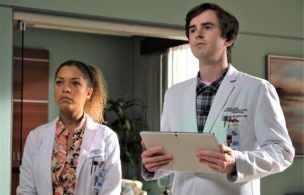 The Good Doctor (10/9c, ABC): By now everyone knows Dr. Shaun Murphy (Freddie Highmore) has lived up to the show’s title, despite the challenges of being a surgeon on the autism spectrum. But does he have what it takes to be a good father? That’s the question as he and girlfriend Lea (Paige Spara) seek counsel from their peers and mentors after learning of her unexpected pregnancy. Breeders (10/9c, FX): Shaun and Lea might want to avoid this dark and profane comedy about the challenges and anxieties of parenthood, which takes a six-year time jump in its second season. With their moody son Luke (Alex Eastwood) turning 13, Londoner parents Paul (Martin Freeman) and Ally (Daisy Haggard) now have to deal with adolescent neurosis, but they’re the ones throwing the tantrums, leading Paul to seek multiple therapists to deal with his anger issues. (Their daughter Ava, played by Eve Prenelle, may be only 10, but she often seems the most mature family member.) Mom and Dad seem pretty monstrous in the opener, threatening to cancel their son’s 13th birthday if he doesn’t follow their rules, but by the second episode (10:30/9:30c), the mood is more emotional as they rally to comfort their sleepless boy through an emotional crisis. See Also‘Genius: Aretha’ Showrunner & Stars Talk Bringing the Queen of Soul to Life
Plus, Suzan-Lori Parks, Courtney B. Vance and more on the series’ creative liberties, and playing the people in the legend’s life.

Genius: Aretha (9/8c, National Geographic): The rousing Aretha Franklin biopic ushers its musical legend (portrayed passionately by Cynthia Erivo) into the turbulent height of the civil rights movement in 1967 and 1968, when she records a protest album and risks her health by juggling activism with Martin Luther King Jr. and a busy career. Her fame inspires a Time magazine cover story, but the diva soon learns that publicity also has its downside. When Singing Competitions Collide: With The Bachelor season now in the rear-view mirror, ABC’s American Idol (8/7c) expands its footprint to Monday, forcing a faceoff with NBC’s The Voice (8/7c). On Idol, Hollywood Week continues, with the remaining hopefuls participating in a “Duets Challenge.” Over at The Voice, the best part of any season wraps with the sixth and final round of Blind Auditions, including a retrospective of some of the best musical moments of the series to date. See AlsoIs ‘Bloodlands’ the Next ‘Bodyguard’? The Making of a Nail-biter
In the four-part thriller, a Northern Ireland police detective hunts a brutal assassin.

Bloodlands (streaming on Acorn TV): Recently renewed for a second season, the gripping Irish crime drama deals with a grim discovery in its second episode: three bodies found buried for 20 years on an island, one of whom could be the long-missing wife of Detective Chief Inspector Tom Brannick (the craggy James Nesbitt). As he reels from this latest mystery, Tom tries to get former IRA gangster Pat Keenan (Peter Ballance) to give up information about his kidnapping, but there are no easy answers. And he makes a decision that leaves the viewer questioning everything about the past and present. Also streaming in its entirety on Acorn: the 10-episode Israeli drama The Attaché, starring Elie Ben-David as a Jewish musician who relocates to Paris from Israel with his wife (Héloïse Godet) when she takes a job as attaché at the Israeli embassy. It’s not all romance in the City of Lights when terrorist attacks rattle their world and relationship.

Inside Monday TV: All six seasons of MTV’s Teen Wolf, the cult horror series that began airing 10 years ago in June, is now streaming on Hulu… The NCAA Men’s Basketball Tournament continues its second-round with games beginning at noon ET/11c (on CBS, TBS, TNT and truTV), continuing through prime time… MTV revives Deliciousness (7/6c) for a weeklong event. Tiffani Thiessen hosts this comical survey of food-related viral videos, with fellow foodies including The Office’s Angela Kinsey and Kel Mitchell weighing in… A&E brings back Hoarders (8/7c) for a 12th season of two-hour episodes, opening with the account of Eric, a widower who buries his grief by cluttering the home once lovingly designed by his late wife. Another episode follows at 10/9c.