‘You gotta block to get the rock’: Arizona receivers embrace dirty work amid clean slate 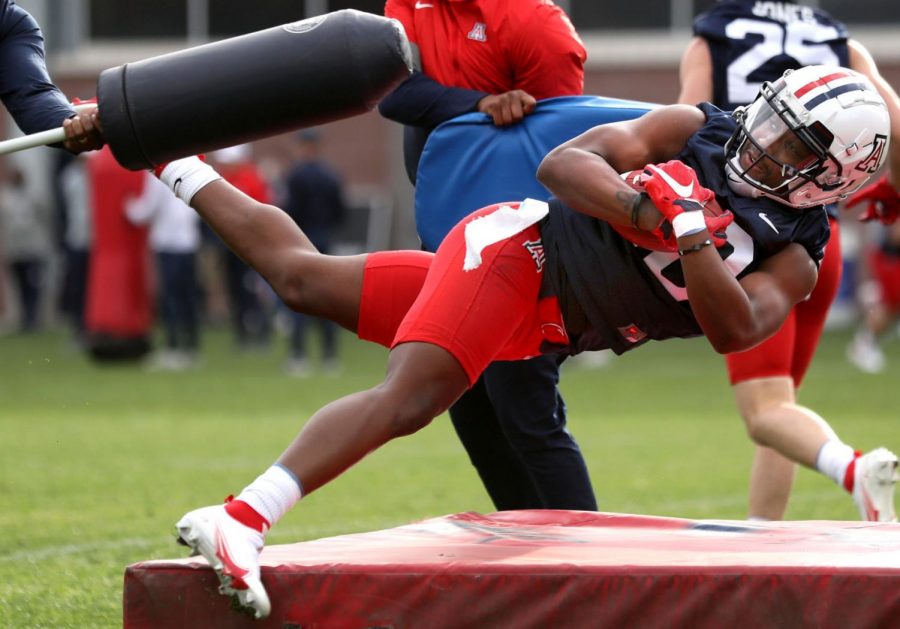 Receiver Jamarye Joiner plunges through the pads and onto a mat while the Wildcat ball carriers work on a goal line plunges during the University of Arizona practice for their spring season, Tucson, Ariz., March 25, 2021.

In terms of time spent on the University of Arizona campus, Thomas Reid III and Brian Casteel are the elder statesmen of the Wildcats’ receiving corps.

Reid is a “super senior.” He’s in his sixth season in a UA uniform.

Casteel is a fifth-year junior. Like Reid, Casteel has spent every one of those campaigns donning the Block A.

Each is playing for his third coaching staff. Each is adjusting to an offense that bears little resemblance to previous iterations.

So what’s the biggest change for the wideouts? Route tree? Verbiage? Position designations?

Try none of the above.

In separate interviews Tuesday evening after Arizona’s fourth spring practice session under Jedd Fisch and his staff, the two veteran receivers gave the same answer to the main question: They’re being asked to block more.

It isn’t just a request. It’s a mandate.

“That’s the first thing they preach to us,” said Casteel, who has added about 15 pounds of muscle to his 6-foot frame.

Said Reid: “You gotta block to get the rock.”

During practice, one of their teammates provided an example of how valuable a block by a receiver can be. In a goal-to-go situation, Gunner Cruz threw a short pass to running back Drake Anderson in the right flat. Receiver Jalen Johnson threw the key block that enabled Anderson to cross the goal line.

Johnson has the physique to become a high-end blocker and more. The third-year sophomore is Arizona’s biggest receiver at 6-2, 212 pounds. He is also among the Wildcats’ fastest wideouts, according to receivers coach Kevin Cummings.

“Jalen Johnson is amazing,” Cummings said. “When you’ve got a kid like that that’s that big and that athletic, he’s gonna be special.”

Johnson was a three-star recruit in the class of 2019 from Corona, California. He impressed as a freshman, catching seven passes for 79 yards and a touchdown in limited duty.

Johnson was suspended for the 2020 season because of an undisclosed off-the-field incident. He is one of two suspended players whom Fisch has granted a second chance. Offensive tackle Edgar Burrola is the other.

“We handled last year as last year and then this year as this year,” Fisch said of the reinstated players. “We just felt like we were gonna move forward if it was appropriate.”

Cummings has assumed a mentoring role with Johnson, who’s at a different stage of his life and career than Reid and Casteel.

“My challenge to Jalen is, just keep growing up every day,” Cummings said. “Keep learning every day, keep handling your business academically, socially, on the field.

“When he came in I said, ‘This is a fresh start. I’ve seen your tape. I know you can be special. My responsibility is to make sure that you keep your head on right and you keep getting better.’ And he’s done both of those things so far.”

Upon the conclusion of the first week of practices, defensive coordinator Don Brown and his staff named their top “Desert Dude.” Their selection was newcomer Isaiah Rutherford.

Rutherford, a cornerback, transferred from Notre Dame earlier in the offseason and immediately assumed a spot with the first-team defense opposite returner Christian Roland-Wallace. Rutherford has displayed the size and coverage skills befitting the four-star rating he received coming out of Jesuit High School near Sacramento, California.

“We’re really excited about him,” Fisch said. “He’s really done a great job since he’s been here. Attitude has been phenomenal, effort, hasn’t missed anything. Academically is doing great.

“And then on the field, it’s what you ask for. He gives great effort every play. He’s very talented. He’s long. We’re very fortunate that we got him in the transfer portal and super excited about what he’s done so far.”

Casteel got the best of Rutherford on a deep ball down the right sideline Tuesday. But it took a perfect, back-shoulder throw by Cruz and an acrobatic catch by Casteel to complete the pass.

Rutherford (6-0, 192) got his revenge later in practice. Casteel slipped and fell on an out route, enabling Rutherford to intercept Cruz and dash toward the end zone for a pick-six.

Fisch has helped modernize Arizona football’s personnel department, but some of his coaching methods are as old school as they come.

Sometimes it’s just the ball-carrier after a fumble. Sometimes it’s the quarterback and center after a bungled exchange. One time last week, the entire offense took a lap around the Dick Tomey Practice Fields after a particularly sloppy stretch.

“We’re not going to tolerate that,” Fisch said. “Before you can learn how to start winning football games, you’ve gotta learn how not to lose them. And the first way to lose a football game is turnovers.”

Arizona ranked next to last in the nation in turnover margin last season with a per-game average of minus-1.80. That number was skewed by the unsightly season finale against Arizona State in which the Wildcats had a turnover margin of minus-7.

Extra pointsCummings on the handful of receivers who entered the NCAA transfer portal before returning to Arizona: “With COVID, with the season, it was a stressful year for those guys. It’s easy when stuff gets stressful like that to just tap out and try to see if something’s better on the other side. So all we ask for guys to do is come in, trust us … and compete, and they’ve done all of it so far.”The defensive line was productive Tuesday against a shuffled offensive line. Several defenders were credited with sacks, including Issaiah Johnson and Trevon Mason on back-to-back plays.Nahe Sulunga, who’s had a strong camp, shared first-team reps with JB Brown. Sulunga had a pass breakup. Brown had a sack.The offensive line had a new look with Donovan Laie unavailable after he got banged up toward the end of Saturday’s practice. Josh McCauley and Josh Baker alternated between center and guard, and Sam Langi moved up to the first unit.Young running backs Jalen John and Stevie Rocker Jr. got a lot of reps behind Drake Anderson with Michael Wiley working on the side. Both had long runs during 11-on-11 play.Tailback Bam Smith remained limited to side work and individual drills.Safety Gunner Maldonado was among the players who did not participate.The Wildcats return to practice at 4:30 p.m. Thursday. The practice is available for the first 200 fans who arrive. The team will scrimmage at Arizona Stadium at 11 a.m. Saturday. That session is open to up to 1,500 fans.