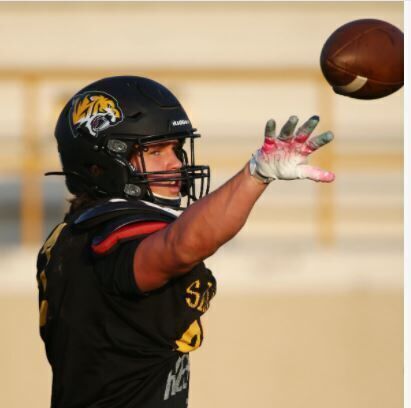 Arizona picked up another commitment for its 2022 recruiting class, when three-star Phoenix-area outside linebacker Tristan Monday pledged to the Wildcats on, well, Monday.

The 6-foot-4-inch, 240-pound Monday, who is a junior at state powerhouse Scottsdale Saguaro High School, selected the UA over Florida State, Baylor, Colorado and Idaho. Monday is rated by 247 Sports as the 11th-best prospect from Arizona, and the No. 58 outside linebacker nationally.

Corralling players from top in-state high school football programs has been a revolving battle for the Wildcats in recent years, but has evidently been a priority for first-year head coach Jedd Fisch, with the addition of Monday and three-star Chandler Hamilton offensive lineman Grayson Stovall, who is the first Husky to commit to the UA since cornerback Malcolm Holland in 2015. The Wildcats also attracted former Chandler standouts, running back Drake Anderson and safety Gunner Maldonado, through the NCAA’s transfer portal.

Monday became the first Saguaro Sabercat to commit to the UA in at least 20 years.

Monday’s commitment put an end to the Saguaro-to-Tucson drought. And the Wildcats could add more, if three-star guard Parker Brailsford joins the Wildcats’ ’22 recruiting class over USC, Oregon State, San Diego State, Colorado, Michigan State and Boise State, among others.