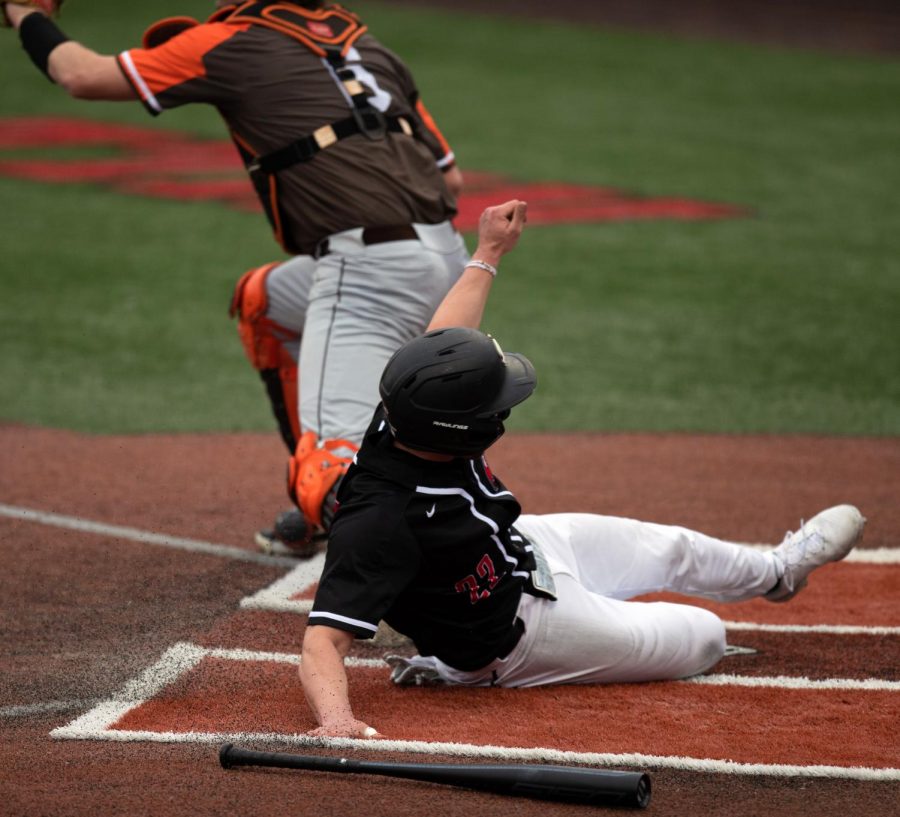 WKU redshirt freshman TY Crittenberger (22) slides into home during the game against the Bowling Green Falcons at Nick Denes Field on March 12.

WKU (5-7) took on the Bowling Green State Falcons (2-5) for their second to last non-conference series of the spring. The Hilltoppers won 4-3 in the bottom of the tenth inning to begin the weekend series.

“It’s an exciting win for the Hilltoppers,” head coach John Pawlowski said. “It’s never easy, it’s never easy. I told our team before the game that it doesn’t matter who we play or where we play it’s always going to be a challenge and a test and it certainly was tonight.”

Sophomore Jackson Gray went 1-for-5 while hitting the walk off single to win the game for WKU.

For Bowling Green State, redshirt junior Jared Johnson 1-for-4, while batting in two runs including an RBI double in the top of the tenth inning.

Redshirt sophomore Jake Kates was awarded his third start beginning the series against the Falcons. He went on to pitch for 7.2 innings allowing two runs while striking out eight batters.

“I was happy with it. My goal every game every time I go out there as a starter is to have a quality start, so that’s six and give up three runs or less,” Kates said.

Senior Andrew Abrahamowicz took to the bump for Bowling Green State in his third appearance this season. He tossed for six innings allowing two runs while striking out eight batters.

Through the first two innings, both pitchers dominated the game. The Falcons got the only hit, while Abrahamowicz struck out four batters and Kates struck out three batters.

The Falcons got the bats going when junior Tyler Haas singled to start the top of the third inning, then Kates walked the next Falcon batter to put runners on first and second base. Sophomore Tyler Ross then scored Haas on an RBI double to give the Falcons a 1-0 lead. Kates recorded two straight outs to get himself out of the jam and to end the top of the third inning.

In freshman Ty Crittenberger’s first collegiate start, he hit a single to left field. The next two batters singled and walked which advanced Crittenberger to third base with one out. Graduate Davis Sims then hit a sacrifice fly to score Crittenberger and tie the game at one apiece. Abrahamowicz then flew out the next WKU batter to end the third inning.

The Falcons had nothing to show for in the top of the fifth inning. Sophomore Matthew Meyer hit his first collegiate homerun to give WKU the lead 2-1 in the bottom of the fifth. Abrahamowicz then recorded three straight outs to end the fifth frame.

After both teams had nothing to show for in the sixth frame, Falcon sophomore Jack Krause hit a triple with two outs. Ross then flew out to leave Krause stranded in scoring position.

In the top of the eighth frame, Kates hit a sophomore Kyle Gurney with a pitch. Then Gurney advanced to third on a single with one out. Gurney scored to tie the game on a sacrifice fly by redshirt junior Jared Johnson.

The game went to extra innings after both teams had nothing to show for in the ninth inning.

Lohmeier walked Meyer to lead off the bottom of the tenth inning. Then senior ray Zuberer III hit an RBI triple to score Meyer and tie the game at three apiece. Sophomore Jackson Gray hit a walk-off single to score Zuberer and win the game 4-3. Sutton picked up his second win of the season coming in relief of Kates.

“It felt good. I had four at-bats prior where I didn’t get on base, so I just tried to flush those and stick with the approach for the last one and it worked out,” Gray said.

Up next the Hilltoppers will continue their homestand against the Falcons in a doubleheader Saturday starting at noon. Pawlowski said junior Sean Bergeron will start game one and junior Aristotle Peter will start game two.