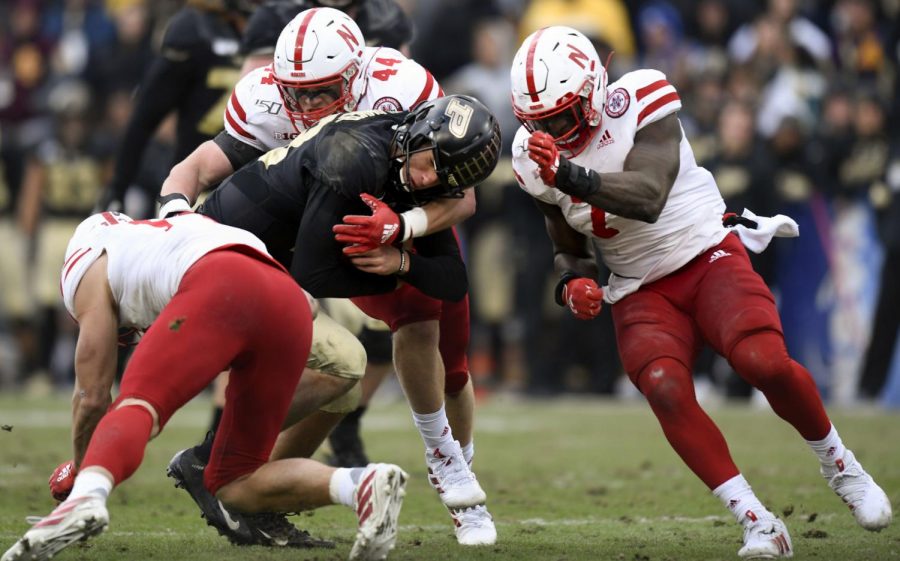 My heavens, it was an awful winter in this country. No reason to rehash it. Ever.

There was at least one aspect that warmed the hearts of Nebraska football fans, however.

As veteran NU defenders announced their return to the program, one after another, Husker fans actually had a legitimate reason for optimism.

It is a legitimate reason, right? After all, five seniors announced their returns. All told, nine starters are back. That seldom happens anywhere.

Such a wealth of experience brings about certain expectations for the unit. But what exactly should be expected?

“You should see leadership on all three levels — D-line, linebacker and the secondary,” said JoJo Domann, a senior outside linebacker and one of Nebraska’s most gifted players on either side of the ball.

He didn’t make any bold predictions, which speaks to his maturity. And let’s face it, most Nebraska fans at this point probably don’t want to hear a lot of bold proclamations in March and April. They want results during the autumn when it matters. They want discernible progress. A top-40 defense, at the minimum (it was 64th last season in average yards allowed). A bowl game, at the minimum.

It’s very possible that Nebraska’s defense could lead the way. Considering all of the offense’s question marks, mainly at the skill positions, the defense may have to lead the way.

Listening to Domann may give Nebraska fans a measure of confidence in that regard, because a lot about his answers in a session with reporters Monday spoke to his personal maturity, and perhaps the maturity of the entire unit.

“We’re not invincible,” he said. “We’re going to get beat out there. But the way we rally and the way we hold down the fort and help control the game for our offense — getting more three-and-outs, forcing more turnovers, and making the game easier on them and giving them more opportunities to score — that’s what you’re going to see from us.”

Nebraska jumped from 62nd nationally in 2019 to 44th last season in yards per play allowed (5.46). NU was 65th nationally in third-down defense, allowing first downs 40.5 percent of the time (there was marked improvement in that area late in the season). Bottom line, the most significant stat is arguably that nine starters return, including the top eight tacklers.

The veterans could’ve moved on with their lives, or completed their careers elsewhere.

A lot of players gathered at Domann’s house soon after last season ended, he said. They banded together. They discussed goals. We’re not talking individual goals. This isn’t golf. They talked about team goals. Imagine that. My heavens, that’s refreshing in this day and age of so many players being consumed with building their personal brand, essentially putting themselves before their team — and receiving kudos from much of society for doing it.

“Each individual had to make the decision for themselves but also understand there is a power in numbers and if we could get everybody back that would be big for our defense and for this team,” Domann said. “It’s awesome. Praise to God that we all came back and have this opportunity to really attack this next year and give it everything we’ve got.”

Nebraska defensive coordinator Erik Chinander said the veterans are essentially like having extra coaches on the field. They’re well-versed in the system. Because of their knowledge of the intricacies, they should be able to play fast and with confidence. They should also be able to help the younger players sharpen their games.

“I was just really happy when they said they were coming back,” Chinander said.

Domann said he returned for two leading reasons: His personal development, and his commitment to the program. He spoke of a commitment to “seeing it through.” That’s maturity. That sounds much more healthy than skipping from school to school searching for the easiest path.

His idea was to help Nebraska return to its winning ways as a program, “and to create a culture that lasts beyond my time here.”

You can’t have enough players with that sort of attitude. Nebraska seems to have plenty of them at this point. Will it pay dividends?

By the way, you know who else wasn’t making bold proclamations about the Nebraska defense’s prowess? The leader of the group. The person in whom the defenders clearly possess ample trust. There’s no way all those veterans return to the program if they don’t have a high level of trust in Chinander.

So, we have to ask him: What’s realistic for this defense? How high is the ceiling?

“That’s a good question,” said Chinander, who then basically danced around it.

That’s OK. It’s probably what Nebraska fans want to hear. Chinander, though, noted the Huskers last season cut down their number of missed tackles per game, from about 11 in 2019 to eight. He said his unit needs to further cut down the number of explosive plays allowed and “find a way to create two or more turnovers a game.”

Nebraska forced only two turnovers in the final five games combined in 2020.

So, yeah, plenty of work to do this spring.

However, Chinander’s excitement is evident. He sounds confident without overdoing it. The season begins Aug. 28 with what figures to be a difficult game at Illinois. Buffalo could be a handful Sept. 11 in Game 2. Then it’s on to Oklahoma, which surely will have one of the nation’s most explosive offenses.

Yeah, seems like a good time to have a veteran defense.

But there’s no reason for tough talk.