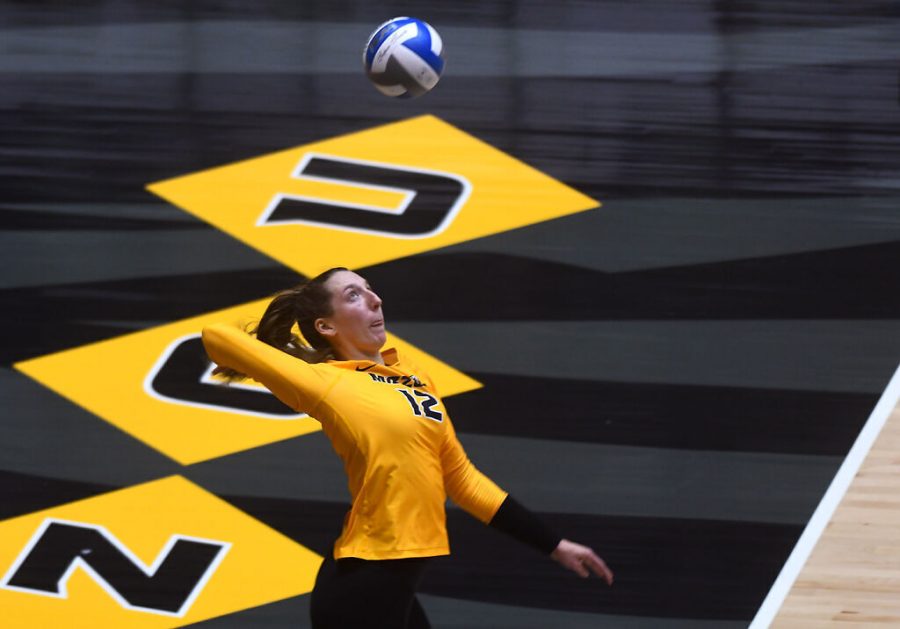 Missouri senior Kylie Deberg serves the ball to LSU on Jan. 29 at Hearnes Center in Columbia. Deberg lead the SEC in kills and is the Tigers main offensive threat this postseason.

For the sixth consecutive season, Missouri volleyball has postseason play to look forward to.

The Tigers begin NCAA Tournament play in the first round against South Dakota at 11 a.m. Wednesday at the CHI Health Center in Omaha, Nebraska. The winner plays No. 9 seed Ohio State in the second round at 11 a.m. Thursday.

The first-round matchup will be streamed on ESPN3 with commentary — a decision the network made that reversed its original move to not have commentators for early-round games. That drew ire from coaches, per reporting from The Associated Press.

Missouri earned an at-large bid to the 48-team field, reduced from 64 teams due to the pandemic. COVID-19 has also forced the tournament to be held at a single site in similar fashion to the men’s and women’s basketball tournaments. The first three rounds will be played on courts set up in the CHI Health Center convention hall and the remaining games played in an adjacent arena.

Extenuating circumstances aside, the Tigers have a test on their hands against the Coyotes.

South Dakota (15-6) punched its ticket to the postseason by winning the Summit League Tournament, upsetting No. 2 seed Kansas City and No. 1 seed Denver, each in five-set thrillers, en route to an automatic bid.

Sophomore outside hitter Elizabeth Juhnke is the Coyotes’ biggest threat. The 6-footer from Lakeville, Minnesota, earned an All-Summit League First Team nod by averaging 4.19 kills per set with at least 15 kills in each of her past seven matches.

Juhnke’s partner on the outside, senior Sami Slaughter, was also an All-Summit First Team nod, as was sophomore middle blocker Madison Harms. The trio is often set in attack by junior setter Madison Jurgens, herself an All-Summit Second Team selection, making for a dangerous offense.

But don’t be fooled: Missouri (15-7) has firepower behind it, too. The Tigers’ attack flows through senior outside hitter Kylie Deberg, who earned her third All-Southeastern Conference honor of her career by leading the league in kills (400), points (468) and aces (40).

Teamed up with opposite hitting partner Anna Dixon and setter Andrea Fuentes — both All-SEC selections, as well — Wednesday’s match is set to be an offensive shootout where it’s likely the better-defending team wins. And in terms of blocks and digs, it’s South Dakota that has the advantage.

The Coyotes have an average of 16.83 digs and 2.5 blocks per set this season, compared to the Tigers’ averages of 12.34 digs and 1.75 blocks. But South Dakota also likes to finish games quickly as it’s 11-1 in matches that are four sets or fewer — and 4-5 in matches that go the five-set distance.

For Missouri to move on it must control the match from the opening serve and prevent South Dakota from getting into a groove. The Tigers were strong in three-set matches, going 8-2, but could also close late if need be by going 5-2 in five-set matches.

Missouri has advanced out of the first round in each of its last six NCAA Tournament appearances. The Tigers will hope that that streak continues Wednesday.