Missouri baseball one out away from becoming Vandy no-hit victim 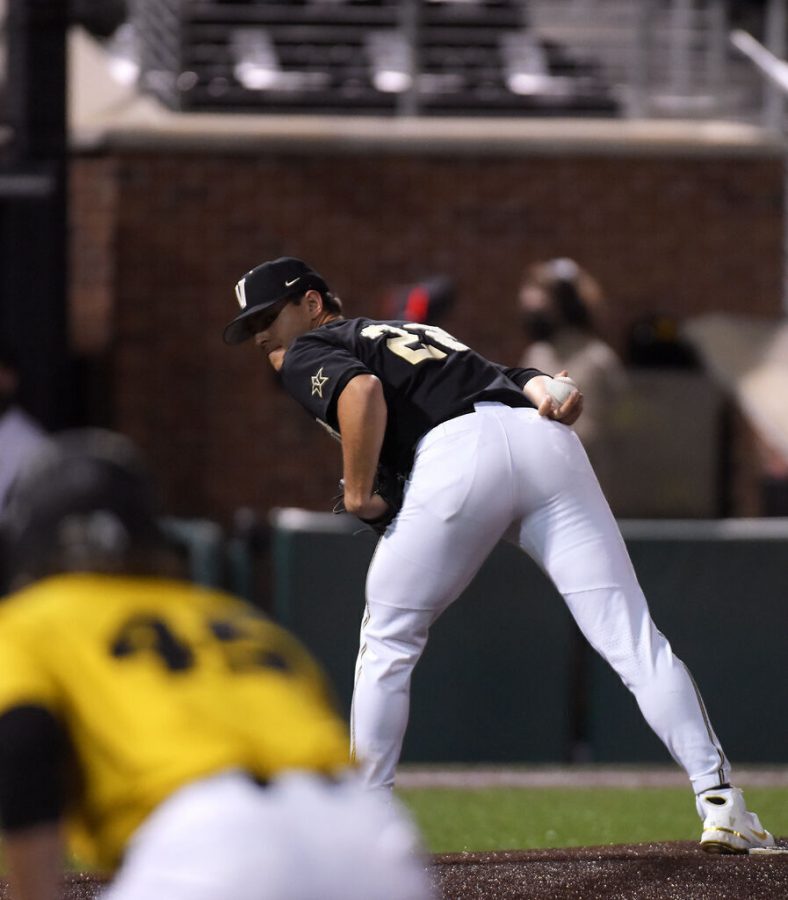 Vanderbilt starting pitcher Jack Leiter looks over at the runner on first base Friday at Taylor Stadium in Columbia. Leiter had 10 strikeouts and no hits in seven innings.

What does a collegiate pitcher do after throwing 16⅔ consecutive no-hit innings?

Only one pitcher is known to have ever thrown consecutive no-hitters. Johnny Vander Meer of the Cincinnati Reds accomplished the feat in his 1938 rookie season.

Friday night against Missouri, Leiter was well on his way to being the first collegiate pitcher to throw back-to-back no-nos. The first one came a week ago in a dominant 16-strikeout performance against South Carolina.

The elite pitching prospect kept the momentum going right into his start against the Tigers. The sophomore pitched seven no-hit innings — on short rest, no less — before hitting his 100-pitch limit and extending a Southeastern Conference no-hit streak to 16⅔ innings.

Vanderbilt relievers carried the no-hitter into the ninth inning, getting two outs on the Tigers before Tre Morris batted a single to right field with just one out remaining. One walk later, Torin Montgomery sent a ball soaring beyond the left-field fence to avoid being shut out.

That was as much offense as the Tigers could muster, and Missouri baseball (8-14) fell for the second time in a row to the Commodores, 11-3.

Last weekend against the Gamecocks, all 16 K’s came on Leiter’s high-90s fastball. He mixed things Friday, going to his changeup and cutter more often versus the Tigers.

Leiter noted that his fastball command wasn’t quite the same in his most recent outing, which was to blame for his high pitch-count. In the post-game press conference, Leiter downplayed his phenomenal start.

“I mean, it feels pretty normal, honestly,” he said. “We have another game tomorrow. (We’re going to try to) get up for breakfast and try to do the same thing.”

Early on, Missouri hitters were frozen by Leiter’s overwhelming fastball. The acclaimed pitcher retired six Missouri batters in a row to start the game, before issuing a walk to CJ Cepicky to lead off the third. Cepicky was one of two Missouri baserunners that Leiter allowed, including a Cameron Swanger fifth-inning walk.

“When the opponent knows that you’re throwing a fastball and when the opponent can’t do anything about it, you know there’s something special with that fastball,” Missouri coach Steve Bieser said.

Leiter had 10 strikeouts overall, bringing his season total to 59, trailing only Ole Miss’ Gunner Hoglund in the SEC standings. Hoglund has 65.

“Whenever they were able to jump out on us quick, there was no pressure,” Bieser said. “He could throw any pitch at any time he wanted, and didn’t really have to panic. We really never made him pitch with any pressure, so he was pretty free and loose. (Leiter) just did an outstanding job with the mix and everything else that he did to us tonight.”

Missouri starter Seth Halvorsen (2-1) picked up his first loss of the year after Vanderbilt hitters had his number from the start.

The Commodores poured four runs on Halvorsen in the first inning, with three extra base hits. Two doubles and a booming CJ Rodriguez home run onto the football practice field put Vandy on the board, and the Commodores kept going from there.

Vanderbilt hitters doubled twice more in the second and added two singles for good measure to push the ‘Dores lead to 7-0.

Halvorsen settled into a sort of groove after the catastrophic first couple of innings, retiring the side in order in the third and fourth, but gave up the second home run of the night to Dominic Keegan on the first pitch of the fifth inning.

Missouri trotted out Drew Garrett in relief of Halvorsen in the sixth, but he didn’t fare much better. Garrett let Vandy put two more tallies on the board in the seventh before Ty Wilmsmeyer shut the Commodore hitters down in the final two frames.

When asked how he felt after two games against back-to-back high MLB draft prospects, Bieser said he felt relieved.

“You got rid of the two best pitchers in college baseball that you had to face so it’s all downhill from here. Hopefully tomorrow we can come out and play a little bit better.”