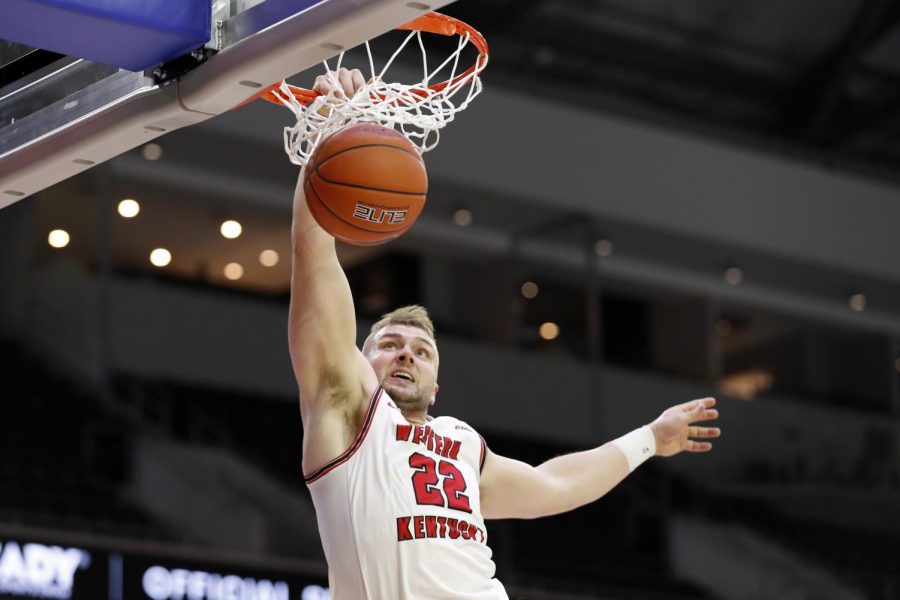 WKU redshirt senior Carson Williams slams home a dunk on March 11, 2021. The Hilltoppers played UTSA in the quarterfinals of the C-USA Championship Tournament.

WKU (20-7) isn’t done playing just yet. On Sunday evening the Hilltoppers were announced as a No. 3 seed in the National Invitational Tournament. The No. 2 seed, Saint Mary’s (14-9), are WKU’s next opponent after both programs lost in their conference tournaments.

“That’s one of those games you’ll never forget,” head coach Rick Stansbury said of the Conference USA Championship loss to North Texas. “I just got to help us get one more stop.”

Stansbury said the team was able to meet yesterday for the first time in 36 hours and talk about some things at the team’s hotel.

“Some guys were emotional,” Stansbury said. “You have to start that healing process somewhere. I know that one game, as disappointed as most of us are, be the identity of this team.”

Junior Charles Bassey aggravated his back injury against Texas-San Antonio back on March 11 and continued to play in the C-USA tournament. Stansbury said with the days of rest since falling to North Texas Bassey had time to rest and should be ready to play Wednesday.

One Hilltopper will not be present for the first round game against Saint Mary’s and the rest of the NIT. Redshirt senior Carson Williams will be participating in a pro day in an attempt to play professional football.

“If there’s an ultimate team guy, it’s Carson Williams,” Stansbury said. “If he stayed and played with us that would have put him behind doing what he really needs to do and focus on to be ready for that combine.”

Although the Hilltoppers will be without Williams, a few Hilltoppers are in familiar territory heading into the NIT.

Seniors Taveion Hollingsworth and Josh Anderson have been to the NIT once before. Back in 2018 the duo went to the semifinals playing in Madison Square Garden against Utah. WKU fell 69-64 and have not been back since.

Another familiar face in the NIT is redshirt senior Kenny Cooper. He last played for Lipscomb three years prior to transferring to the Hill. Lipscomb went to the NIT Championship game against Texas in 2019 and fell 81-66.

Now the Hilltoppers have to transition into the next part of the season playing in the NIT.

“Knowing the character of my guys, how they are, how they’ve been, they’ll find a way to get back up again and be ready to go,” Stansbury said.

WKU will play at 8 p.m. Wednesday evening against Saint Mary’s. The contest is set to be broadcasted on ESPN2.

With a win on Wednesday night, the Hilltoppers will play either Ole Miss or LA Tech on March 27 at noon or 3 p.m. The quarterfinals of the NIT will be broadcasted on ESPN.