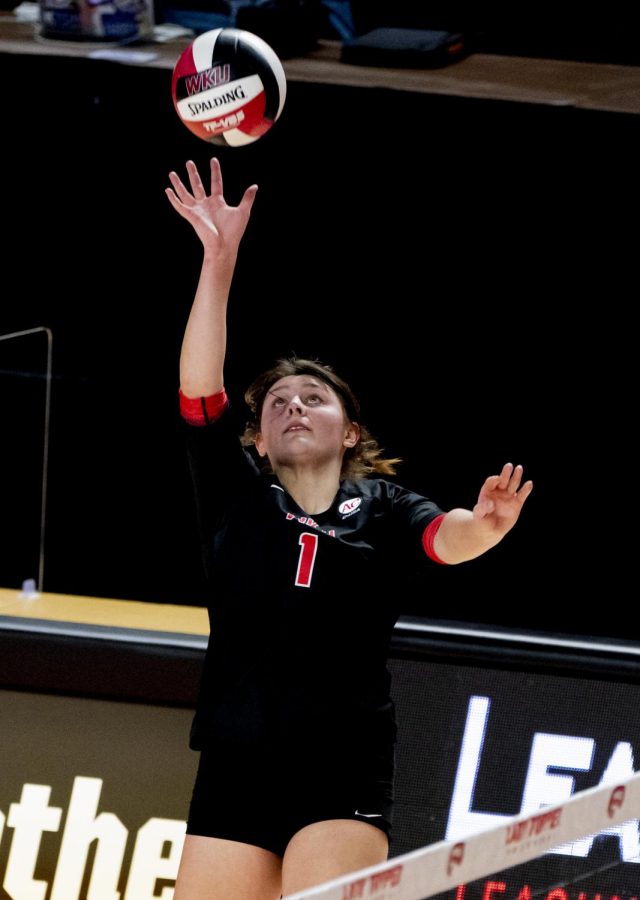 WKU Sophomore Paige Briggs (1) hits the ball during their game against Charlotte on Monday, February 22, 2021 in Diddle Arena in Bowling Green, KY.

Sophomore outside hitter Paige Briggs has been selected to be a part of the 2021 Conference USA Volleyball All-Academic Team, said Jessica Leifheit, Associate Director of Communications and Media Relations for WKU Athletics in a press release Tuesday.

Out of 11 students named to this team, Briggs is the only one hailing from WKU. The program has now seen players be awarded for academics and playing skills for seven seasons straight.

The program has belonged to C-USA for seven seasons now, and within those seasons, nine players have been awarded spots on the All-Academic Team.

Briggs holds down a 3.87 GPA and has been on the President’s List all three full semesters she has been on WKU’s campus.

She also shows up and out on the court, with two C-USA Offensive Player of the Week awards under her belt this season, as well as completing 10 double-doubles and leading in kills and points during many matches. She has also started in 18 matches and all sets this season.

With the help of Briggs, WKU Volleyball went a perfect 18-0 through the regular season and secured the 2020-21 Conference USA East Division championship. The Hilltoppers have now claimed a regular season title both years Briggs has been on the Hill.