‘The Falcon and the Winter Soldier’: Meet the New Star-Spangled Man (RECAP) 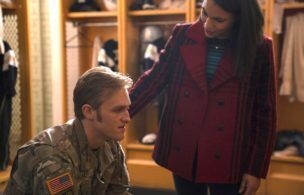 ‘The Falcon and the Winter Soldier’: Meet the New Star-Spangled Man (RECAP)

[WARNING: The following contains MAJOR spoilers for The Falcon and the Winter Soldier Season 1, Episode 2, “The Star-Spangled Man.”]

If your blood was boiling when you saw someone else holding the shield that Steve Rogers/Captain America (Chris Evans) gave to his friend Sam Wilson, aka the Falcon (Anthony Mackie), well, this episode won’t do much to endear you to John Walker (Wyatt Russell), the government-appointed Captain America 2.0., better known as U.S. Agent. While he starts off nice enough, the guy’s certainly got an unpleasant side, which Cap’s first friend Bucky Barnes, now the Winter Soldier (Sebastian Stan), and Sam run afoul of.

Also, the terrorist organization, the Flag-Smashers (which wants to return the world to a post-Blip state), have started to reveal its plans, which drives the Falcon and the Winter Soldier to make a surprising decision involving a former MCU villain. Here’s how it happens. See AlsoHow Did ‘The Walking Dead’ Help Shape ‘The Falcon and the Winter Solider’?
What other buddy movies did director Kari Skogland look at for the Sam and Bucky relationship?

Not What Steve Wanted

We start with an introduction to John Walker, the new Captain America. He’s giving a televised interview from his old high school about what it’s like to be Cap, and the interviewer lists off his credentials — three medals of honor, counterterrorism missions, and off-the-charts speed and intelligence. Walker says he doesn’t have superpowers and he knows he has big shoes to fill, and “even though he never met [Steve Rodgers], he feels like a brother.”

Do you know who doesn’t take kindly to that statement? Bucky, who’s been watching the interview from his furniture-less apartment. From there, he reunites with Sam, who’s on-base preparing for a mission to Germany, where he might have found the Flag-Smashers’ headquarters.

“You shouldn’t have given up the shield,” Bucky says, reminding Sam that “this isn’t what Steve wanted.” He and Sam argue for a bit, but when it comes down to it, Bucky invites himself on the mission and gets on the plane to Munich.

After a hilarious scene in which Bucky jumps out of the airplane without a parachute (“I don’t need it,” he says, then flails wildly to the ground, yelling and landing with an unglamorous thud), he and the Falcon go to investigate the old, abandoned warehouse where the Flag-Smashers supposedly reside. They find eight people loading crates into trucks, and they believe the group has a hostage, so, as the trucks pull out, they pursue them. 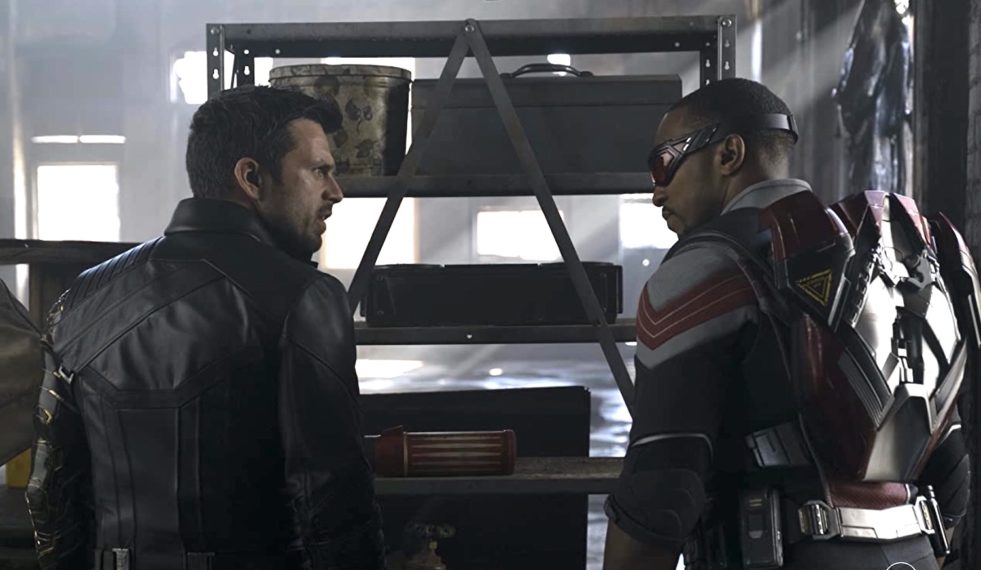 Bucky gets onto one of them and makes two important discoveries: that the group is smuggling vaccines, and the location of the hostage. He asks the girl if she’s all right, and she gives him an eerie grin…then punches him out the back of the truck, where two other Flag-Smashers haul him up to the roof of a different truck. (So clearly, these people have superpowers.) Bucky fights them, then Sam shows up and joins the fight, and then John Walker and his pal show up and join in, too. In the end, it makes no difference — the Flag-Smashers smash ’em, leaving the group battered and bruised.

Walker and his friend, Hoskins (Cle Bennet), who calls himself “Battlestar,” offer Bucky and Sam a ride to the airport, which they reluctantly accept. Turns out, Walker tracked them through Sam’s robot sidekick Redwing (so that’s how he showed up at the perfect time), and, despite appearances, he reassures the duo that he’s not trying to be Steve. He suggests they join up, which doesn’t go over well. Bucky’s the first to get out of the truck in annoyance, and Sam soon follows.

Bucky wants to steal the shield back, but Sam reminds him the last time they did that, he wound up on the run. There is, however, one resource they haven’t tried — a man named Isaiah (Carl Lumbly). Bucky met him during the Korean War and he also has super-strength, which becomes apparent when he throws a tin into the wall in a fit of anger. Bucky inspires that rage by referring to him as a “hero.” All Isaiah got for his “heroic” actions was a 30-year jail sentence and constant tests and experimentations. He orders Sam and Bucky to get out of his house. See Also11 Best Sam & Bucky Moments in the Marvel Cinematic Universe
These two have had plenty of ups and downs before ‘Falcon and the Winter Soldier.’

Understandably, Sam’s upset that Bucky never told him there was a Black super-soldier decades ago (but to be fair, Bucky didn’t even tell Steve about Isaiah). He raises his voice, and the police materialize to ask whether Sam’s bothering Bucky and demand Sam show them I.D. — they don’t know who Sam is, and once Bucky reminds them, they’re stunned and apologetic. But they end up arresting Bucky for missing his therapy session, which was a condition of his pardon.

Well, Walker bails Bucky out, and Bucky’s therapist is waiting. Walker has also managed to change the terms of Bucky’s pardon so that he doesn’t have to have frequent therapy sessions anymore (they have, as Walker puts it, “unfinished business”). So, Bucky has one last session, which Sam also attends. They wind up doing something called a “soul-gazing exercise,” where they sit close to each other and answer the therapist’s questions. Asked why Sam aggravates him, Bucky asks Sam why he gave up the shield.

“Maybe he was wrong about you,” Bucky says of Steve’s faith in Sam, “and if he was wrong about you, then he was wrong about me.” Bucky’s visibly shaken, and Sam asks, “Are you finished?” After telling Bucky he did what he thought was right, he thanks the doctor for “making it weird” and leaves. Bucky soon follows, after asking his therapist for a reminder of what “rule number two” was. (“Don’t hurt anyone,” she reminds him.)

Outside the precinct, they run into Walker, who again suggests they join forces. He knows that the leader of the Flag-Smashers, Karli (Erin Kellyman), was taking the medicine she stole to camps for those displaced by the return of the Blipped. Again, Bucky and Sam decline, saying they’re “free agents” who don’t need any authorization to investigate. “A word of advice, then?” Walker snaps. “Stay out of my way.” Uh-oh!

Meanwhile, the Flag-Smashers have loaded their vaccines onto a plane. As they’re being pursued, one of them stays behind to allow the others to escape. “One world, one people,” he says, the group’s mantra. He dies, but the rest fly away.

Sam and Bucky devise a new plan. The Flag-Smashers have connections to Siberia, and Bucky knows someone who knows some things about Siberia. It’s a bad idea, and it’s a Hydra-connected idea, but it’s all they have…and thus, they decide to see former Sokovian military officer and total baddie Zemo (Daniel Brühl).

The Falcon and the Winter Soldier, Fridays, Disney+