Where Is Kelly Ripa? Talk Show Host on Break From ‘Live With Kelly and Ryan’ 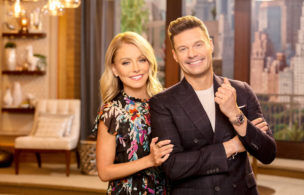 Where Is Kelly Ripa? Talk Show Host on Break From ‘Live With Kelly and Ryan’

After a week of Live with Kelly and Ryan without Kelly Ripa, fans are wondering where the co-host is.

When viewers tuned in on Monday, March 22, Ripa seemed to be unexpectedly awol, and has been since. But according to a source close to the show, there is no reason for concern: Ripa is merely taking her annual two-week spring break to be with her family. Rumors started to fly given there had been no mention of her break prior to her leaving, just a parade of guests co-hosts: Maria Menounos, Ali Wentworth, and Harry Connick Jr.  have shared the desk alongside Ryan Seacrest.

The week of March 29 has already kicked off with a Monday rerun with Ripa and Seacrest, which featured Hugh Grant promoting the HBO limited series The Undoing (an appearance from November 2020). The rest of the week’s lineup — including Lana Condor discussing To All the Boys: Always and Forever, Priyanka Chopra Jonas promoting The White Tiger, Ralph Macchio on Cobra Kai, Tim Allen talking about Last Man Standing, and Zendaya on Malcolm & Marie — are also reruns.

Plans are for Kelly to be back for the week of April 5.

The show’s ratings have been incredibly strong. Live is now has ranked No. 1 in all of Daytime in the key Women 25-54 for more than a year (the 53 weeks includes 12 weeks of ties), according to ABC. In syndication, it remains the 2020-21 season’s No. 1 syndicated talk show across the board among total viewers, household rating and with the key Women 18-49 and Women 25-54 demos.

Live with Kelly and Ryan, Weekdays, check your local listings