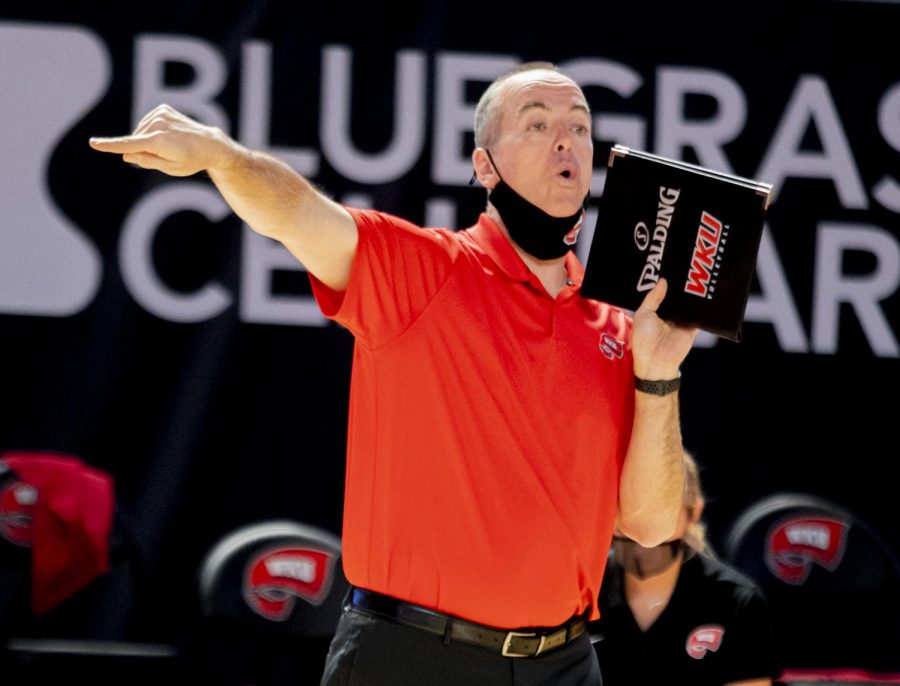 WKU Volleyball Head Coach Travis Hudson yelling to his players during the game against FIU on Monday, March 8, 2021 in Diddle Arena.

FIU was kept to single-digit scores in two of the three sets.

“A pretty convincing win today,” head coach Travis Hudson said. “We cut down on unforced errors. Today I thought we were much more sound with our decisions.”

WKU extended their winning streak over the Panthers to 15-0 following Monday’s match.

“From a serving stand point I like how we served the ball this weekend,” Hudson said. “Our servers were really consistent which gave us the opportunity to do that, and our ball handling, our first contact on both sides was really solid.”

Similar to Sunday’s match, FIU was the first to get up on the scoreboard. WKU’s first point of the match was due to a FIU service error. Early on in the set, senior setter Lauren Matthews broke a 3-3 tie and a kill by sophomore middle hitter Avri Davis pushed the Lady Toppers ahead 4-3.

Junior middle hitter Katie Isenbarger pushed the team up to a lead of three after hitting a kill. WKU’s lead increased to four after a kill by senior outside hitter Kayland Jackson, then to five after an FIU attack error.

WKU saw a double-digit lead, 20-10, for the first time in the match after Briggs blocked a Panther ball trying to travel over the net. The Lady Toppers finished off three sets with double-digit leads Sunday.

Another kill by Briggs with an assist from Dieudonne gave WKU the setpoint. After five plays, Briggs hit her last kill of the set, with the Lady Toppers gaining their first set win of the match 25-14.

Two WKU kills started off the second set, one by Jackson and one by Davis. Following the play, a Panther kill gave FIU its first point of the set.

This run was broken up by a Panther kill, but the Lady Toppers continued to dominate the court. The team achieved a 10-point lead following a kill by Briggs, pushing the score up 13-3.

Multiple runs followed, the final one being 5-0, which included three FIU errors. This match was another high error one on the Panthers’ side.

An FIU attack error led set two to set point in WKU’s favor. An ace by Shelton capped off the set for WKU with a score of 25-8.

This was the 10th time this season WKU has held a team to a single-digit score in a set.

A big block to an FIU ball by duo Matthews and Jackson started off the third and final set of the match. Another early run let WKU continue their dominance on John Oldham Court. WKU went on a 5-0 run with two kills by Matthews, a kill by Davis and two Panther errors.

Back-to-back kills by Briggs pushed the Lady Toppers’ lead up to eight, and FIU called a timeout. Briggs came out of the break with another kill, and FIU followed with two errors.

WKU’s run extended to 14-0, leading to FIU’s second timeout of the match, specifically following a kill by Briggs.

The long-duration run was cut after WKU’s second error of the set, compared to FIU’s total of nine, giving the Panthers their fifth point of set three.

Set three hit set point after a block of an FIU ball by Jackson and freshman middle hitter Shannon Keck. The two teams saw setpoint for five plays. The match was finished after a ball travelling from FIU’s side of the net hit out of bounds, giving WKU the 25th point of the set, while FIU stayed in single digits.

The Lady Toppers completed their 3-0 sweep of FIU with a 16-point lead in the third set, 25-9. This third set is now the 11th time WKU has held another team to less than 10 points in a single set.

The Lady Toppers will host West Virginia (8-8) Friday at 5 p.m. West Virginia has not played a match since Nov. 20, 2020, when the Mountaineers took down Oklahoma 3-1.

“It will be a really good experience for all of our players to compete at a super high level,” junior Ashley Hood said of Friday’s match. “We just really need to focus on ourselves and see what we can fine tune before the match.”