Like a good neighbor, NFL sets up Patrick Mahomes-Aaron Rodgers matchup with addition of 17th game in 2021 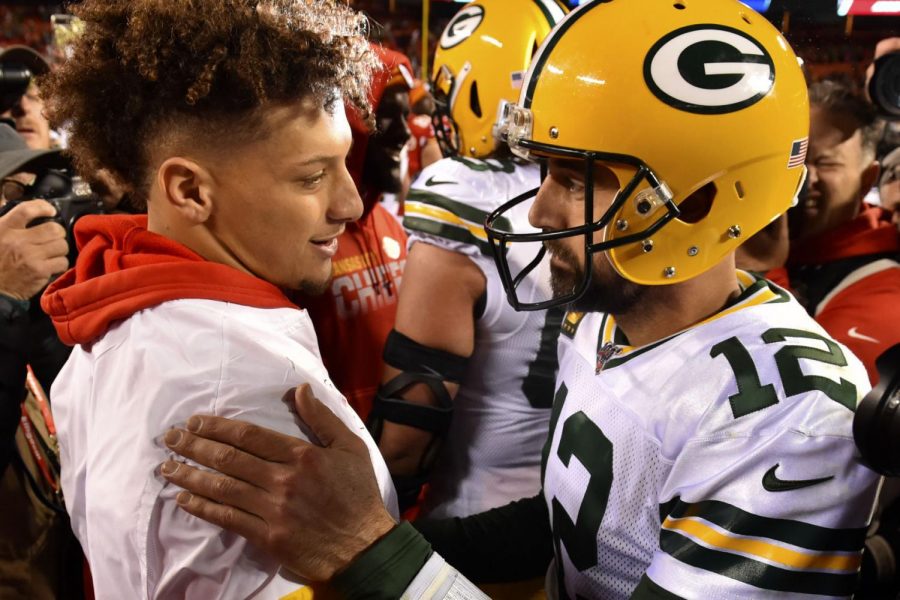 Now, thanks to the NFL officially adding a 17th game to the 2021 NFL schedule, perhaps the Green Bay Packers’ 37-year-old star and the Kansas City Chiefs’ 25-year-old star will get to do something they have yet to do: Face off in a game.

Mahomes missed the Packers’ 31-24 victory over the Chiefs at Arrowhead Stadium in Kansas City in October 2019 with a dislocated kneecap, and the Packers’ NFC Championship Game losses to the San Francisco 49ers and Tampa Bay Buccaneers the past two postseasons prevented Rodgers and Mahomes from going mano-a-mano in Super Bowl LIV or LV.

But with the NFL expanding its regular-season schedule to 17 games (and reducing the preseason schedule to three games per team) for this coming season, they will get their chance to duel at Arrowhead if both are healthy for the matchup. (The Packers and Chiefs did face off in the 2018 and 2019 preseasons, but Mahomes and Rodgers sat out those games.)

“Obviously, he’s an extremely talented player. I love putting on the film and watching him and his arm angles and throwing ability and his eye manipulation. He’s an extreme talent in the league,” Rodgers said the week of that 2019 game, before Mahomes was ruled out.

When told his coach, Matt LaFleur, had said that he was the quarterback Mahomes “is most similar to” because of their off-platform throws, changing arm angles, arm strength and accuracy, Rodgers replied, “I mean, it’s hard as an active player to make a comparison like that, and I don’t want to do him any disservice. I think he’s a phenomenal player. He does some incredible things on the field.

“I enjoy watching guys who have similar styles. He’s able to extend plays. He’s obviously very talented throwing the ball on the run to either side. He’s got the arm to put it all over the field. He obviously had a fantastic year (in 2018) winning MVP and I think he’s going to be around for a while doing that.”

To add the 17th game, the NFL paired up NFC and AFC divisions, with the NFC North drawing the AFC West. The teams from opposing conferences that finished in the same place within their division the previous season will match up, and the Packers (13-3) and Chiefs (14-2) won their respective divisions. The AFC will get the additional home game this year; the NFC will get it in 2022.

Meanwhile, the NFC teams will host two preseason games while playing one exhibition on the road in 2021, with the AFC then getting the additional home preseason games in 2022. That means each team will host 10 total games each year, preseason included.

The additional regular-season game will be interspersed with the other 16 games, as opposed to all 32 teams playing their additional game on the same weekend.

“The 17th game, they can put it anywhere,” Packers team president/CEO Mark Murphy said during a Zoom call with reporters Tuesday evening. “They can schedule that to draw the best (TV) ratings.”

With a road game against the Chiefs officially added to their slate, the Packers’ already challenging 2021 schedule got that much tougher. Of their 16 games, 10 will be against teams that made the playoffs this past season, including two matchups with their NFC North rivals, the Chicago Bears.

In addition to their home-and-home series with the Bears, Minnesota Vikings and Detroit Lions, the Packers are also set to host the Seattle Seahawks, Los Angeles Rams, Pittsburgh Steelers and the Washington Football Team at home. Seattle, Pittsburgh, Cleveland, Washington, Chicago and L.A. all made the playoffs last year, with the Packers beating the Rams at Lambeau Field in the divisional round to advance to the NFC title game.

On the road, the Packers face the 49ers, Arizona Cardinals, New Orleans Saints, Baltimore Ravens, Cincinnati Bengals and the Chiefs. Kansas City, New Orleans and Baltimore made the playoffs last year, while the injury-riddled 49ers fell to 6-10 after losing to Mahomes and the Chiefs in Super Bowl LIV a year earlier.

Speaking to reporters Tuesday during the league’s a two-day virtual meeting of owners, NFL commissioner Roger Goodell called the expansion of the regular-season schedule a “monumental moment in NFL history,” as this marks the first time the schedule has been expanded since the league went from a 14-game schedule to 16 games in 1978. The league is not adding a second bye week as part of the expansion.

Goodell also said the league is aiming to have full stadiums for the 2021 season after the COVID-19 pandemic forced games to be played in empty or near-empty stadiums all year.

“All of us in the NFL want to see every one of our fans back,” Goodell said. “Football is simply not the same without fans, and we expect to have full stadiums in the upcoming season.”

In addition to the expanded schedule, the NFL also announced that each of its 32 teams will play at least one international game over an eight-year span beginning with the 2022 season.

“I think when you step back and look at it, for the good of the league, being able to grow the game internationally really is going to benefit the league long term,” Murphy said, adding that the foreign countries discussed Tuesday were England, Mexico and Germany, with longer-range possibilities in Canada, Brazil, China and Australia.

“The fact you still have eight home games is a positive. The other thing I thought about, particularly if we play in London, I think a lot of our fans are really going to be excited about the opportunity to travel internationally and go to London and be able to watch the Packers play an international game.”