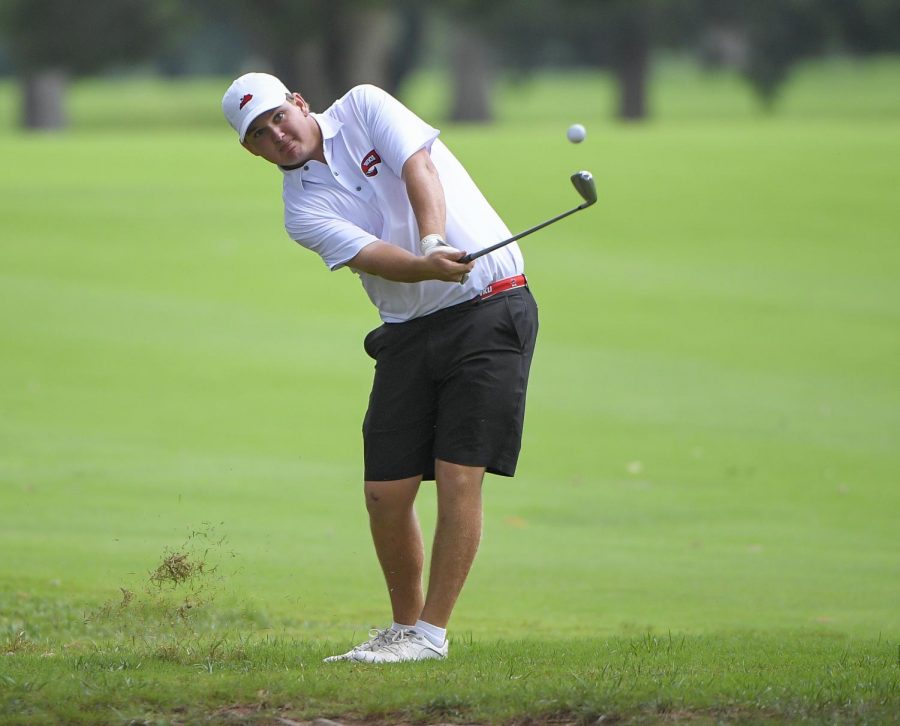 Luke Fuller shooting a practice round on Aug. 31, 2020 at Bowling Green Country Club.

The countdown is on for the Conference-USA tournament for the WKU Men’s golf team with the calendar turning over to March and the tournament being two months away.

The Hilltoppers have yet to have a victory this year, let alone a top five finish, but WKU gets another chance this weekend in the Sea Palms Invitational at Cullowhee, NC. The event is being hosted by Western Carolina University.

There is still a lot of time for the Hilltoppers to turn things around and build off of their phenomenal final round in their match at Mobile, Alabama. WKU shot a 4-over 292, with sophomore Luke Fuller leading the way shooting 3-under 69.

Head coach Chan Metts credits the late tournament production to the strenuous outings on the course during practice time.

“We make holes a little bit more difficult,” Metts said. “We have maybe internal out of bounds or maybe play the cart paths as a mandatory penalty areas. We play a lot of worse ball nine hole qualifiers, which is a style of golf that will absolutely beat you up if you let it, and it takes a lot of mental perseverance to get through those rounds of golf.”

Fuller, who has benefited off of the frigid exposure, might be a little upset to see spring and warmer temperatures creeping up on the season given the most recent scores.

Both the coaching staff and the Hilltopper players have grown a new found respect for the way Fuller plays each and every day, whether it be in a match or on the practice field.

“[Luke] just seems to have gotten better every semester and I think that’s all I would ask of any of the players that we have in our program,” Metts said. “Luke has been putting in a lot of hard work. Really, even though he’s not a captain he’s kind of become one of the leaders on the team and I think he’s got a lot of the guys’ respect.”

And for a guy to be so young and looked at as a go-to-player, it takes a lot of skill, which Fuller has been able to use in his efforts to gain the attention of his peers.

“The main way to do it is just to be able to compete with them, shoot the scores and just play as good as them or better,” Fuller said. “I think that’s the main way to earn their respect.”

Hopefully for the Hilltoppers sake, Fuller can continue his outstanding play and they can see a little bit more consistency from their star veterans in senior Caleb O’ Toole, redshirt senior Tom Bevington, and graduate Christian Tooley.

The three upperclassmen combined to shoot 20-over 884 in the Hilltoppers last match, which does not include Bevington’s disqualification on round three.

A nice finish in North Carolina for the Hilltoppers this weekend can be the start of a nice run into the final stretch of the season.

“We’re gonna go full steam ahead with the same style of practice that we’ve had. We’re gonna keep it as difficult as we possibly can from now until we leave for Texarkana in April for Conference. That’s been the message that I’ve given to the guys all along and they’ve taken that on and they’ve accepted that challenge,” Metts said.